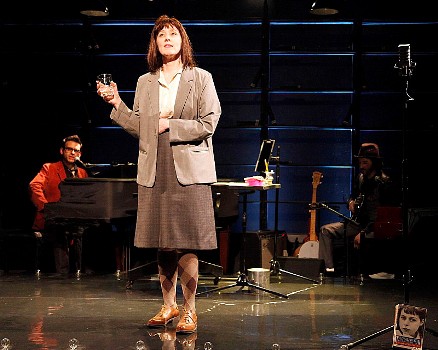 Suzanne Vega’s “Carson McCullers Talks About Love” is a strange kind of performance piece, and that’s the best thing about it. It’s sort of a musical and sort of a cabaret act, performed by Vega and two other musicians on a smaller stage than she has played since the days before she started having hit records—well, one hit single (“Luka”), a semi-novelty (the a cappella “Tom’s Diner”), and a lot of decent, smart, coolly delivered pop-folk albums. The show is sort of a play about the novelist Carson McCullers, best-known for “The Heart Is a Lonely Hunter” and “The Member of the Wedding,” but it doesn’t dramatize conventional scenes from McCullers’ unconventional life, as Sarah Schulman did in her 2002 play “Carson McCullers (Historically Inaccurate).” Vega sort of impersonates McCullers but never erases herself onstage, in a way that reminds me of the late Ron Vawter’s solo performance “Roy Cohn/Jack Smith.” She opens the show with a song called “Iron Butterfly,” and then tells us that she wrote the song as a teenager after seeing a biography of McCullers in a bookstore and being struck by the physical resemblance between herself and the famous writer, who died in 1967 at the age of 50. Then she sits down at a makeshift makeup table, slips on a wig, wipes off her lipstick, pulls on a man’s coat, and steps into the role of Carson McCullers.

For the next hour or so, Vega-as-McCullers entertains us with stories about her life: growing up in the Deep South, becoming a writer (she published her first novel at 23), moving to New York, getting published, traveling abroad, meeting lots of famous people, and falling in love with any number of men and women. These stories roll out in songs and speeches and something in-between. She sometimes imitates other people in her life, sometimes the musicians stand in for other characters (such as her gay alcoholic husband Reeves), and sometimes Vega banters with the band in some loopy standup-comic-like way that is not-Vega and not-McCullers. Vega is clearly not an actor, so director Kay Matschullat has given her props and gestures to suggest a characterization, which she inhabits loosely and somewhat awkwardly.

I found the awkwardness of the show surprisingly endearing and true to the spirit of McCullers, who spent much of her adult life depressed, over-drinking, and increasingly crippled by a series of strokes while writing devastatingly naked and sympathetic depictions of human beings that other writers would view as misfits and oddballs. The songs range from wispy to substantial, some of them a little generic. The finale, “Carson’s Last Supper (Agape Love Feast),” struck me as hokey, a musical thud. Duncan Sheik composed the music to Vega’s lyrics, and their styles blend pretty seamlessly, though “Lover, Beloved” stood out as an especially Sheik-like tune. As a longtime admirer of Vega’s music, I was touched by her identification with McCullers’ outsiderness and her willingness to inhabit her worldview, matter-of-factly described thusly: “The state of being loved is intolerable.”