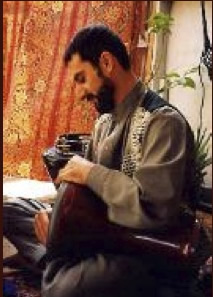 We’ve gotten so used to keeping the world at bay with e-mails, text
messaging and the like —  we  “connect” with a love Interest in
cyber — so that real live encounters are something of a shock. This
disjunction came to mind when I listened to Syrian-born Bay Area
resident percussionist Faisal Zedan on his second CD with Eliyahu
Sills’  Qadim, Eastern Wind, in the safe confines of my apartment, and
then caught it live with my friend Mark, in the front room of the West
Portal house in San Francisco which serves as the home base for The
Arab Cultural and Community Center. We were in the second row, with
Zedan and his musicians facing us, backs to the window overlooking the
street, so there was obviously no place to hide. And who would want to
? The beauty and complexity — of perhaps  100 modes / scales — of
Arab music
is, after all, one of the best kept secrets on the planet. And its
infinite subtleties, and deeply communal spirit ensnare body, mind, and
heart. In which the soul longs for something larger than itself.

The Arabic — and much better known in the West Indian tradition — are
not concerned with clock time, but with a thing much bigger than ” he
said, she said “. It’s not narrative, or ,as Ajyal’s Syrian lead
vocalist and oud player Naziir Latouf intimated in a song about the
beloved’s search for their beloved, in 7-gated Damascus, love — or the
divine, if you will, encompasses much more than that. And the elements
which incarnate that are divorced from this world’s sense of time.
Being in that moment is one’s release from the burden — Sisyphus
pushing his rock up and having it fall back on him each day — weight
of time. One is lifted up. And  Zedan’s newly formed Ajyal did that
time and again. The rhythmic and melodic feeling here – the contrast
between say 2 and 3 and 4 beats principally in the percussion parts —
cemented what went on between them– Latouf — and Iraqi Husain Resan
who played the also amplified violin iin 90 uninteruppted minutes which
gave the lie to time.

Music and life — Arabic’s based on quarter tones are rarely
major//minor per se but something in between, and it’s the genius of
Arabic
music and art to mine this
difference with such sweet force. George Stevens’ 1951 film A PLACE IN
THE SUN caught this shadows in dark and back in the faces of his actors
Elizabeth
Taylor, Montgomery Clift.  and Shelley Winters, because nothing’s sad
or happy all or part of the time.. Zedan on riqq ( Arabic tambourine )
and derbakki — or dumbeck ( goblet shaped drum )  got his company’s
tarab — an
untranslatable Arabic  word for something like ecstasy or surrender to
the divine — got his ready and willing audience there, aided and
supremely abetted by Susu Pampnaim on dumbeck, and Terri Anne, on daf (
frame drum ),  their complex interlocking / supporitng rhythms seamless
meshed with Latouf and Resan’s constantly shifting
melodic lines.