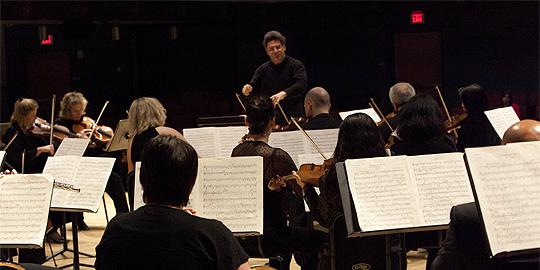 Dirk Brossé, music director of the Chamber Orchestra of Philadelphia, conducting members of the ensemble

The Chamber Orchestra’s November concerts in the Perelman Theater had something for everyone. Conductor Dirk Brossé seems to want to show as much versatility as possible in his first year as maestro. Ignaz Solzhenitsyn, his predecessor, is now conductor laureate and performing as a concert pianist.

The concert opened with Barber’s “Adagio for Strings”—played, Brossé announced, in molto adagio tempo as originally marked by Barber, separate from many subsequent symphonic arrangements. The molto is instructive in the more sonorous (basso striations in this case) and the somber atmospherics more intimate. A few technical flaws didn’t take away from its enveloping drama, the players building precision, crystallized textures and powerful fades.

Oboist Geoffrey Deemer showed such earnest command in Vaughan Williams’s Concerto in A Minor for Oboe and Strings, even as the Pastorale intro seemed a tentative relationship in the orchestral handoffs. No hesitation in the second movement, where Williams pretty surfaces are pierced and the players were just masterful in expressing the deeper chambers of this piece. Deemer thrilled with solos that soared, dove and lit with so much flight of oboe fancy.

Brossé added an unscheduled interlude, pleasant but unnecessary. Fortunately he was back to the playlist with Crisantemi by Puccini, who wrote it one evening to be at a funeral the following day. Great to hear Puccini without the expectation of voice; this piece has state funeral grandeur and theatrical dazzle at once.

Philadelphia Orchestra principal cellist Hai-Ye Ni was a featured soloist, in the same week, in a concert by composer Tan Dun, for his opus “The Map.” The cello voicings in “The Map” go from lush European romanticism to the mystical note-bending of the ancient Chinese cello. Ni was rapturous in that work and with the Chamber Orchestra on Tchaikovsky’s “Variations on a Rococo Theme.” Ni exhibited clarity by the book, with some intriguing accents in the denser solo passages. Brossé’s equalization on this well-worn piece was subtle and dynamic.