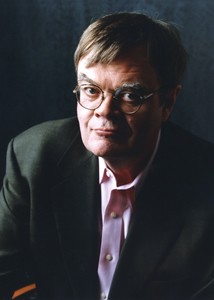 Mark Twain; Will Rogers … Americans historically love a good story as well as the raconteurs who have spun themselves into icons while spinning the tales. In our own day, the honors surely must go to Garrison Keillor who, thanks to the miracle of radio waves, probably reaches more listeners on a Saturday night than did his illustrious predecessors in a lifetime.

It was a Tuesday, not a Saturday, when the star/host of the perennially-popular “A Prairie Home Companion” loped out onto the stage of Berkeley’s Zellerbach Hall but what’s in a day? With no backup music, guest stars or sound effects – just a high stool and a microphone – the man from Minnesota mesmerized a packed house with his tales, poems and songs, holding them in the palm of his hand for a nonstop 90 minutes before gently letting them go and unceremoniously loping off again.

Clad in red sneakers and socks, with tie to match, Keillor opened his set with a Biblical hymn, “By the Waters of Babylon (we sat down and wept…”) but any weeping quickly turned to laughter as he segued into the irreverent prayer of an agnostic, followed by recipes, advice on immortality and a discussion of romance (“My eyes get misty when I think of Julie Christie”) in an exhaustive aria of self-composed sonnets. Keillor’s singing voice is a little offbeat, rather like his appearance, a tall, rangy body topped by the famously rumpled face. But he actually both sounds and looks better live than on the air or in pictures. And, in spite of his dour Minnesota persona, the man actually talks with his hands, like any hot-blooded Mediterranean type.

Minnesota, its mores and weather – especially its weather – was the dominant theme of Keillor’s lengthy monologue, done without notes or teleprompter in testimony to the sheer survival skills of the “dark Lutherans” of whom he speaks. Tales are of his childhood, his early and lasting infatuation with words, his father’s constant disapproval (“He really wanted me to be a mechanic and repair cars”) the Boy Scout camping trip from Hell and the time he high jacked the family motor home and drove it out onto a frozen lake which melted overnight.

He ends with a story from Lake Wobegon, the famous fictional hometown (he really is from Anoka, Minnesota) where “all the women are strong, the men are good looking and the children above average,” that involves a man shoveling snow off his roof and ultimately freezing to the shingles when he lies back for a little rest. He weaves in some of the sites familiar to Wobegon devotees: The Chatterbox Café, Our Lady of Perpetual Responsibility Church, and you feel right at home in this weird, hilarious, frozen world. After all, we’ve been hearing about it since 1974.

Who cares whether or not it’s true? Or if Keillor himself has, betimes, deserted the Midwestern vastnesses for Scandinavia and New York, now lives in a seven-bedroom mansion in St. Paul, has been married three times and, at 65, is both a grandfather and the father of a ten-year-old daughter?

As he notes: “We are all just people and all we owe to each other are a few good stories.” Garrison Keillor has paid up in full.