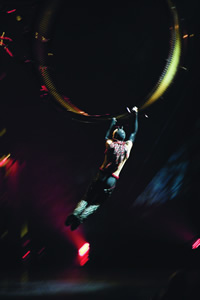 It is virtually impossible to doze off at a performance of Cirque de Soleil. What with the flashing lights, loud music and frequent applause for the high-flying daredevil acts, adrenaline alone should stave off the soporific state. And yet …

Kooza, the latest extravaganza from the long-running Canadian super-franchise, making its U.S. debut under the Big Top (known as Le Grand Chapiteau) in San Francisco at the start of a major cities tour, is sure to delight and thrill first-timers. But for those of us fortunate enough to catch earlier incarnations such as Vareka, Mystere and, according to unanimous hearsay, the watery one down in Vegas, Cirque has known better days – or at least, better shows.

Not to denigrate the acts, which are terrific as always. Gravity-defying tumblers and acrobats, heart-stopping aerialist routines, guys who can jump rope or fight a duel on a high wire, an incredible trio of female contortionists and a really cool juggler who should play for the Golden State Warriors: they are all there and in fine form. Perhaps the finest (and this is strictly a personal preference) is something called The Wheel of Death, in which two guys (Jimmy Ibarra Zapata and Carlos Enrique Marin Loaiza) run on, in, out of and atop two giant rotating cylinders. If it doesn’t sound that exciting it’s because it is truly beyond words.

What is missing from this show is the sense of wonder and the over-the-top spectacle of yore. Creator/director David Shiner, himself a former great Cirque clown, has declared his intention to pare things down to the essentials – those being the acts and the clowns. With only a hint of a story line (and not a very interesting one at that) to hold it together, that’s exactly what he has accomplished. The result might be termed “Cirque-lite.”

It begins with a kid (Stephan Landry who actually is a short clown) trying unsuccessfully to fly a kite. The postman pedals up with a large package which, when opened, turns out to be a giant jack-in-the-box containing a kind of lean, sinuous genie-clown (Jason Berrent as the Trickster), wielding a magic wand. A wave of the wand and the action begins. Later, after the very long intermission (one-half hour, presumably to facilitate sales of food, drink and overpriced Cirque memorabilia), the kid (also known as the Innocent) gets hold of the wand and conjures up a gaggle of dancing skeletons, led by Death with his scythe. After a big production number, the skeletons spend the rest of the evening chasing people around the stage.

Three clowns, Gordon White as the King and Christian Fitzharris and Joshua Zehner as his court, do their intermittent shtick, fetching folks up from the audience, running away from a pair of inept cops and knocking each other down, between the legitimate acts of derring-do. Michael Halvarson has another audience-participation bit as a pickpocket. It’s terrific but it goes on too long, as does Anthony Gatto’s juggling routine.

In the end, his new friends all recede into the wings and the Innocent is once again left alone with his kite. But this time it soars aloft on the wind. And that seems to be the message. Where other Cirque productions boasted complex, somewhat arcane story lines, fraught with hidden meaning, this one kind of dumps you flat, wishing for a grand finale with lots of stage smoke and sequins and feathers. Quel domage.