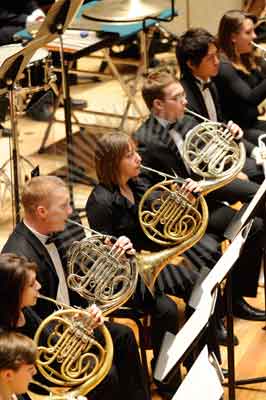 The Other Fab Phils

All attention has been on the Philadelphia Orchestra, which has a new conductor taking the full reins this month, but there is another mighty orchestra in town that should never be out of the musical spotlight: the Curtis Symphony Orchestra.

Leading up to the full orchestra performances, at the Field House recital hall in the Curtis Institute on Oct. 10, the student series kicked off with a concert featuring Eighth Blackbird, a freewheeling, technically savvy sextet that is on the first leg of a three-year residency at Curtis. This ensemble attacks the stage with very kinetic playing in a conservatory setting and is appealing to young audiences. They break down the starchiness of chamber playing and make it more like physical musical theater, bounding around the stage, moving the sound around — very cage-y. The group played “Tied Shifts — a jazzed, Bulgarian folkloric composition from Derek Bermel, one of their collaborators — which is a virtuosic, earthy romp.

Zoe Martin-Doike, a third-year student, then introduced Arnold Schoenberg’s Chamber Symphony No. 1 as being exhibit A that the composer may have suffered from bipolar disorder. Martin-Doike dug into those lush lines that accelerate to dense furies as the fragmented and dark chord clusters from pianist Xiaohui Yang were on a chromatic wire essaying an existential crisis. All of the players acquitted themselves in this demanding piece.

The same week, in Verizon Hall, the 100-plus strong Curtis Symphony Orchestra was finishing a week with Mexican conductor Carlos Miguel Prieto for muscled performances of Britten and Strauss. First, though, was Curtis conductor Kensho Watanabe leading a profoundly dignified arrangement of the “Star Spangled Banner.” The young conductor then showed such mature signatures in his accents on a Tchaikovsky duet from “Romeo and Juliet,” equalizing the symphony’s most famous romantic (and oft-milked) bloom. Soprano Sarah Shafer and tenor Christopher Tiesi, who both trained at Curtis Opera Theater, sang the lover farewell with reserved and intense intimacy. It was more than surface beauty; they played the scene and the chemistry was real. Watanabe showed delicacy and power in the pacing. He equalized the entire piece, rather than exploit that famous melody.

Shame there were not more kids in the audience for Benjamin Britten’s “Young Person’s Guide to the Orchestra,” reconstructed around “Variations and Fugue on a Theme of Purcell” in a textbook reading narrated by the wonderful local actor John de Lancie, who sounded like a BBC radio star from a bygone era. The charming, easy-access qualities of the instruments, from those gossipy bassoons to the metaphysical cellos. But, when the narration stops and Purcell (theme) meets Britten (variations), this is a glittering pyro-technical display of youthful intensity and symphonic power.

A warmup, as it turned out, to the intensity during Richard Strauss’ “Ein Heldenleben” (A Hero’s Life). Strauss’ epic poem of a soldier’s life is prescient to Strauss’ own theatrics in Zarathustra, but also Stravinsky and Carl Neilson, among other later composers. Orchestrally, CSO just owned this from the start, with the sonic power of the opening, and all through Prieto was eliciting full-throttle, tight playing from these musicians. The “Hero’s Helpmate” section, played by violinist (concertmaster) Nigel Armstrong, is a fragmented, extended sequence that keeps evolving. Armstrong’s beautiful tone in the front led to some hazy orchestral interlocks, but as Strauss gets more abstract, Armstrong’s interpretive skill fired every line and the players were right there with him.

Prieto summed up working a week at Curtis by saying, “I had heard about them, but nothing prepared me,” before he led the thriller of an encore by Mexican composer Silvestre Revueltas’ “Sensemayá” — a percussive, driven orchestral noir about a ritual snake killing, reminiscent in moments of “Le Sacre du printemps,” but much more rhythmically supple in many ways, a quality that was given its full force by CSO.