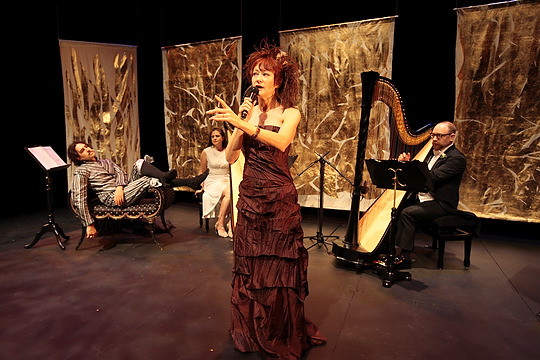 “Dueling Harps” marked the return to the New York stage of Ann Magnuson, the comic actress and performance artist who honed her chops in the East Village club scene in the 1980s and now plies her trade primarily in Los Angeles. A collaboration with Adam Dugas, co-founder of the New York-based cabaret troupe the Citizens Band, the show (first performed in L.A. two years ago) was conceived as a kind of East Coast/West Coast Battle of the Bands with the contestants performing a crazy array of songs accompanied only by, yes, harp.

I’m a sucker for shows that pull together an eclectic array of pop songs, so let the record show that this duo opened the show with the Smiths’ “Bigmouth Strikes Again” and closed with Led Zeppelin’s “Dream On” with classical harpists in evening wear carefully and expertly plucking behind them. Dugas offered Pink Floyd’s “Bike” and Kraftwerk’s “The Model.” Magnuson did Jefferson Airplane’s “Lather” and, as Vulcan Death Grip lead singer Raven Botticelli, a reprise of “Holiday in Hell and I’m Wasted.” Together they performed tributes to Lee Hazelwood and Nancy Sinatra (“Summer Wine”) and Donna Summer (“I Feel Love”). Magnuson looked fantastic, whether in a sparkly hemmed Pat Fields skirt or a camisole with fishnets, and handsome Dugas wore a striped outfit by Elise Fife that wouldn’t look out of place at Pennsic. And the musicians, Alexander Rannie and Mia Theodoratus, were superb.

It was the kind of high-concept show that’s perfect for a late-night, booze-lubricated, fly-by-the-seat-of-your-pants club gig at a place like Club 57 on St. Mark’s Place, where Magnuson and cohorts like Kenny Scharf and John Sex threw theme parties like “Putt-Putt Reggae” and the punk-rock quiz show “Name That Noise.” But mounted as a theater production with real costumes and lights and musical arrangements, on a famous stage where Orson Welles and Martha Graham had performed (as an awestruck Magnuson acknowledged), “Dueling Harps” didn’t hold up. For one thing, isn’t the East Coast/West Coast rivalry thing kinda tired? For another thing, two hours of faux-lounge singers faux-singing is just too much. And the pop/classical music joke exhausts itself in about 10 minutes.

Even though the show was already too long, I enjoyed most the encore, which turned out to be a long rambling early Halloween Hollywood ghost story that had something to do with Magnuson attending the annual spook-holiday party at Marilyn Manson’s designer white-trash home. Besides trading makeup tips with MM and admiring his collection of lunchboxes, Magnuson witnesses the party’s traditional Has-Been Karaoke, with Mindy Cohen from “Facts of Life” performing “Bela Lugosi’s Dead.” Whether this is a dream, a fantasy, or one of those only-in-LA eyewitness reports (like Joni Mitchell writing “The Hissing of Summer Lawns” about a dinner party at Jose Feliciano’s house), the piece displayed Magnuson’s mastery as a pop trash compactor, like John Waters or Sandra Bernhard. It’s a distinctly minor art.