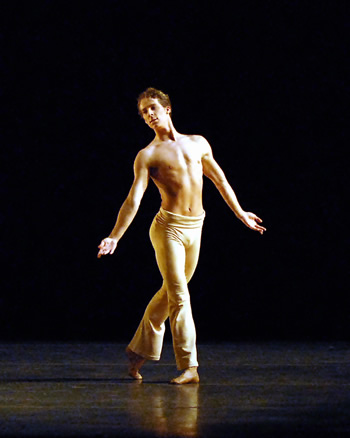 Slovenian company Betontanc’s Wrestling Dostoievsky, at Danspace Project at St. Mark’s Church, took Crime and Punishment as a jumping off point, but the overall mood, and not the shouted text, made the most impact. Light fixtures made from blouses were scattered around the house and operated by audience members. Four oriental carpets wrapped people up and smothered them, besides lying there. The company of six chugged around en masse to sly music that filled the sanctuary. A brutal rape scene and a madman bearing a hatchet, running circles at full speed, terrified. Eastern European companies, as recently as five years ago, had an earnest, tragic aura that seemed a result of years behind the iron curtain, but after assimilation, if they have to summon Dostoyevsky now to conjure that same angst, so be it.

Varone and company looked terrific, and put together a superb program (I saw A) that showed his different sides. He is a bit overlooked, but has worked on a high level for eons and creates solidly constructed, beautiful dances that are highly musical, emotional, or both.

ABT’s fall season delights in part because it is brief, just three weeks. It’s a bit ragged due to a wildly diverse rep and not enough rehearsal time. But less-known corps members get their fifteen minutes, and principals carouse in styles other than ballet. Mark Morris’s Drink To Me Only With Thine Eyes shone brightly, particularly placed between Balanchine and Tharp. Corps member Blaine Hoven impressed in the nitro-fuelled In the Upper Room, expertly interpolating Tharp’s schizo swings between pure ballet and uncorked hip rolls. Hoven and other corps men looked fantastic in Stanton Welch’s Clear, starring the sublime Herman Cornejo. To watch come promotion time: Isaac Stappas, Kristi Boone, Jared Matthews, Craig Salstein, Adrienne Schulte, and Hoven. Tharp’s Sinatra Suite still looks dull and overdressed (lose the tux jacket!), even with Jose Manuel Carreno in the lead; the sublime Marcelo Gomes gave it more of an edge.

Valery Gergiev conducted the Kirov Orchestra, plus a large male chorus directed by Patrick Gardner, in Shostakovich’s Symphonies 8 & 13. I expected them to be dark, sonorous; pondering infinities. I didn’t anticipate the whimsy and melodiousness. The orchestra performed flawlessly, and the chorus more than held its own amid daunting company.

Paul Taylor and his company took the small stage at Works & Process, a lecture/demo-style format, featuring six dance segments. I realized how infrequently even New York audiences get to see its big resident modern companies. PTDC’s season may last two long weeks in March, but otherwise it’s in rare doses like this. Taylor reflects the dualities of his oeuvre: dark and hilarious, and his still-imposing stature represents his solid framework of his technique. Taylor – shooting frequent broad smiles and a dusky laugh – spoke plainly and made fun of himself, winkingly sharing recollections “from when I was a baby,” and copping to being a liar and a cheat. I came to Taylor’s work rather late, having taken it for granted for a long time, enticed by it primarily after watching Michael Trusnovec perform it for several years. He makes what might seem cliche or affected about Taylor’s style looks pure, formal, noble. Taylor’s work, rendered by Trusnovec, is a revelation.

If you think abstract art is boring, go see the Marden retrospective. It traces his career in logical steps from monochrome canvases to today’s jewel-toned racetrack maps. He honors the legacy of art history while creating gorgeous art that forges its own path, and during the time spent with it, pushes aside the cynicism and bitter (if deserved) social commentary so prevalent.