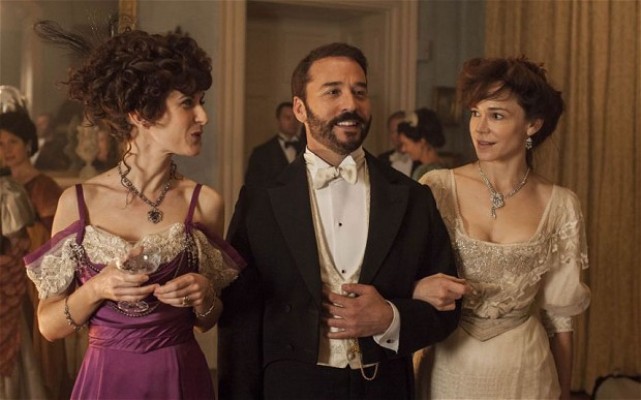 In 1909 London, American Harry Selfridge (Jeremy Piven, “Entourage”) arrives with his family from Chicago determined to modernize the London shopping experience as he did in Chicago at Marshall Field’s.
The brash, bold and self-assured Selfridge finds that traditional retailers in London prefer their customers to be seen, but not heard. Customers should be shown one item, accept it and leave. Browsing is nonexistent.

Selfridge has new ideas. Soon fancy and imaginative window displays, women’s ready-made dresses in all sizes and counters of beauty products grace Selfridge’s store. With Harry’s showmanship, the large and successful department store becomes the center for all that is new and exciting, if a bit flashy. But what can a Londoner expect from a brazen American?

The eight-part period drama series about the life and loves of Harry Gordon Selfridge is based on the non-fiction biography of “Selfridge, Shopping, Seduction, and Mr. Selfridge” by Lindy Woodhead. The series begins “in medias res.” Harry Selfridge is fully formed; his bravado and retail creativity are in full swing. We are given no background with which to understand an inner Harry and his motivations. What you see is what you get. I found this disconcerting in the first episode.

Part of my discomfort stemmed from trying to accept Jeremy Piven as Harry Selfridge. The three-time Emmy winner was previously best known for playing talent agent Ari Gold on HBO’s “Entourage,” Piven seemed like a 21st century actor reaching to act as an early 20th one. Perhaps part of the problem is the script.

Yet, by the second and third episodes, I became fully involved in the saga of “Mr. Selfridge” as the women characters took center stage. Zoe Tapper (“Stage Beauty”) is Ellen Love, a showgirl and mistress to Harry. Frances O’Connor (“Madame Bovary”) is Harry’s loyal wife, Rose, who could use some clothing tips from the Selfridge’s crew. Katherine Kelly (“Coronation Street”) plays a racy socialite with a mysterious past. Aisling Loftus (“Case Histories”) is the spunky shop girl Agnes Towler. As we begin to understand and appreciate these women’s lives, the pace of the show quickens and the plot thickens.

Americans are not as surprised by the ability of a huckster like Harry Selfridge to rise to success, so a broke do-nothing earl with a grand estate seems more alluring. On the other hand, Londoners may be more intrigued by the sudden triumph of Harry Selfridge in class-conscious 1908 London.

ITV has already announced that “Mr. Selfridge” has been commissioned for a second series to air in 2014.