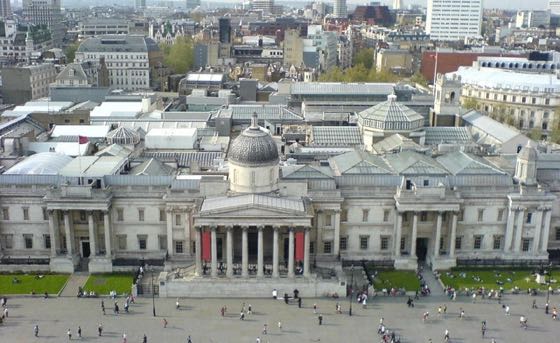 Produced and directed by Frederick Wiseman

How do we look when we’re looking at art? That’s one of the intriguing facets of this gorgeous art tour of London’s National Gallery. Frederick Wiseman’s documentary, “National Gallery”, which opened in November, shows us many scenes of faces looking at faces. Human faces peering, pondering, smiling, puzzling at portraits painted by the masters of medieval, Renaissance and Romantic art.

During the mesmerizing three hours we spend at the gallery, we see preparations for and openings of major exhibits of the work of Titian, Turner and Leonardo. The 2011 Leonardo exhibit (titled “Leonardo da Vinci: Painter at the Court of Milan”) was a blockbuster; $25 tickets were being scalped for $400. Wiseman shows scenes of museum visitors lined up in hopes of obtaining tickets.

The gallery’s collections constitute Western European art of the 13th to the 19th centuries, so you’ll not see any Lichtensteins, Pollocks or Stellas here. But you will see works by Degas, Cézanne, Monet and Van Gogh from the later era, as well as Rubenses, Rembrandts, Michelangelos, Botticellis, Durers and Caravaggios.

Wiseman’s treatment lets us view the museum and its art in its glory with no voiceover and no background music. Occasionally we join a group listening to a docent describe a painter’s style or speculate on the story behind a painting. We sit in on board meetings where budgets are refined or publicity opportunities are debated. We watch restorers at work and hear them talk about paint surfaces and frames. We see workers preparing a gallery for a new exhibit and hear the sound of their hammering and taping.

The museum’s educational mission is shown in drawing classes where we observe the students drawing and hear the instructor point out how to capture the shading of a male or female nude. In a very moving scene, blind visitors learn about a painting by Pissarro by touching reproductions printed in relief.

Wiseman also treats us to other art events at the gallery, such as a piano recital, a poetry reading–and two ballet dancers performing in a gallery.

In addition to the many scenes of faces absorbing art, the film shows long reverent shots down narrow galleries of art culminating in a masterpiece at the end.

“National Gallery” is a portrait of a magnificent arts institution. Wiseman shows us the size and grandeur of the gallery’s collections and its role in the exuberant London artistic community.

Wiseman is known for his meticulously produced, fly-on-the-wall film portraits such as “High School” (1968), ”Welfare” (1975), “Public Housing” (1997), and “State Legislature” (2006), in which he gives us an institutional portrait of the Idaho Legislature. There’s also “Ballet” (1995) about the American Ballet Theatre and “La Danse” (2009), a portrait of the Paris Opera Ballet. He’s known for his minimal treatments, avoiding clutter such as narration, voiceover and graphics.

“National Gallery” opened in November and will run at art houses throughout the US through March. The DVD release is scheduled for early in 2015. And should you have a chance to visit the National Gallery in London in person, it’s open 361 days a year and admission is free.