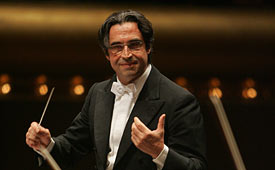 Riccardo Muti’s star power has not diminished in the years since he left the Philadelphia Orchestra, so his erratic program in Verizon Hall with the New York Philharmonic was a big disappointment, but fascinating in its deficiencies.  The curiously musty programming of a lacy Liszt Prelude and soupy Elgar concert overture seemed already at odds with Muti’s interpretive strengths.

The opening violin plucks of the Liszt ‘Les Preludes, Symphonic Poem No. 3 seemed like clever entrance music with Maestro Muti’s  slipping back into a town arena that was still tasting bad blood over his last canceled appearance two years ago. It was perfect. From there, the orchestra displayed its sonic stability in the delicate climate of Liszt, but the precision and accents started to blur by the middle and the work’s familiar melodies crowded out the subtleties in the back half.

Elgar’s ‘In the South‘ Allasio concert overture was the most stabilized piece, but locked into a sterile, academic reading. It was also easy to be distracted by Muti’s signature port de bra, which at times, seems to move the music around in the air, but often looks showy. At one point, his pivot and attack move ala Bela Lugosi, was comical.

But, ultimately, it was Prokofiev’s ballet score to Romeo and Juliet, which should be easily dazzling under Muti with it’s huge narrative architecture, but on this night was starkly unexpressive, even brittle. The concussive entre act of Prokofiev, is commanding under Muti, but this R & J was not the sum of its played parts. Muti’s fortissimo crashes so hard in the hall, that the whispering orchestral afterburn is not backed up with careful orchestration.  Both the sonic drama and musical detailing get away from the New York Philharmonic and not helping were long pauses between the scenes,  which pointed up a disjointed performance.

Still there were great character solos, especially the oboes and horns. Speaking of horns there were wayward ones, but deft in bringing forth Prokofiev’s tonal subterranea.  Muti, lurches toward the coda so much that it is finally just hammered out.

On the up side, the New York Philharmonic overall sounded more succinct than it did a year ago in Verizon under punishing touring and Lorin Maazel, who was finishing up his tenure as chief conductor. They are being rejuvenated the newly named chief conductor Alan Gilbert. Meanwhile, Maestro Muti, off performance notwithstanding, can always count on his legions of Philly fans to greet him, anytime he is back in town.