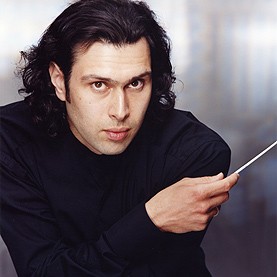 From Russia, with Philly Love

With just four stops on the podium in front of the Philadelphia Orchestra, London Philharmonic maestro Vladimir Jurowski has already tapped revelatory musical streams with the Fab Phils. This month in a lushly crafted and orchestrally succinct play list of Russian masters- Stravinsky, Tchaikovsky and Prokofiev.

Stravinsky’s Scherzo Fantastique sounds like a sprightly ballet score and in moments, allusive to The Firebird. Jurowski certainly made the music bouree and arabesque in our heads. The Fantastique might be a confection on the surface, but played this well it conjures chromatic depths.

Then,  Sergey Khachatryan’s interpretation of Tchaikovsky’s Violin Concerto proved an event in itself. The young violinist looked shy during the orchestra‘s silky allegro, but Khachatryan’s sonorous command and razor precision were second nature.  The mystique of this piece vivid in this violist’s playing and Jurowski’s pacing letting Tchaikovsky breathe.

There were more thrills in Jurowski’s baton, during Prokofiev Symphony no. 4, not often played, he put on display the Philadelphia Orchestra has to offer Russian neo-classicism. What Valery Gergiev achieves with the Kirov, Jurowski does with the Philadelphia Orchestra as he unlocks Prokofiev, who composed in and outside edicts from Stalinist artistic control. Jurowski articulates with unflashy drama. The soloists and especially Kiyoko Takeuti subtle piano entrances building Prokofiev’s sonic architecture in steel and sonic shadows.

Solzhenitsyn, son of the late writer Alexander, is a warm authoritative presence, a gentle giant with his usual gig conducting the Chamber Orchestra of Philadelphia, but here looked more the brooding pianist who was all business when he came accompanied the women of the Moscow Quartet. He may be chamber maestro, but he fit into the balance of ensemble power with skill and presence.

The women of the MQ- aggressively interpretive and artistically steely floated crisp articulation of  The Rider by Franz Joseph Haydn, immediately setting the tone of an unacademic afternoon.  Surprising in fact, to hear the later movements lurching toward romanticism.

Next, the lush and spiney musical terrain of Dmitri Shostakovich’s Quintet in G minor, is necessarily a taut dialogue between Solzhenitsyn and first violin Eugenia Alikhanova, they each have their anti-melodic say, but this is piece reminds you of fractured jazz symphonia.

Alikhanova dissonant edge so taut that it bordered on nerve snapping until she releases a whispering resolve.  Solzhenitsyn’s crashing basso runs are never overwrought, from flat murmurs to Monkish density that lingers rattles the spine.

Later, jazz immediacy extended to the Moscow Quartet’s reading of Beethoven’s String Quartet with vibrant overlays and handoffs among the players.  One can only hope they return soon.  Solzhenitsyn gives an impressive preview of his full PCMS concert in March.