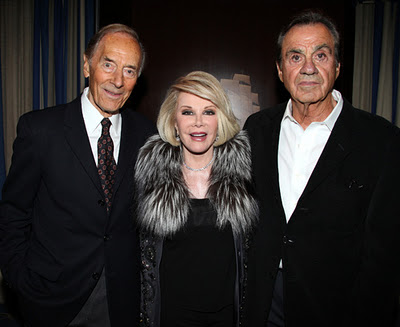 Alan Shayne (left) and Norman Sunshine (right) with Joan Rivers at a
book party for the authors
Photo by Walter McBride, Retna Ltd.

Ah Yes, They Remember It Well

TV producer Alan Shayne and painter-sculptor Norman Sunshine may have been an A-List gay power couple in the 1960s, but they were not publicly out, not only because of their careers, but because they came of age in the era of internalized homophobia. Their journey together started in the antigay 1950s, and they tell their story in their touching memoir “Double Life.” The title refers to their lasting relationship and having to remain publicly in the closet.

Now, as they mark their 50 year relationship, they are a relatively newlywed couple, having tied the knot in Massachusetts where gay marriage is legal.Norman and Alan tell their stories in alternate first person chapter, with their view of who they were individually and what they were doing as a couple. It is a charming and candid approach. They can be very period un-PC, but outside of a few retro points of views, these men validated their own terms.

When they met, Shayne was a struggling Broadway actor and told he would never be a star by a powerful agent. Sunshine, a Los Angeles émigré who escaped the suburban life to become a graphic artist in New York and meet men out of the purview of his family who wanted him to go into the family furniture business.

Even though they were instantly attracted to each other, they couldn’t have seemed more incompatible when they clumsily started dating and looking for every reason not to be together. Their attraction won out.

Both men had experienced traumatic same-sex incidents as teens and conflicted about embracing their homosexuality. Shayne was in fact seeking de-gaying therapy, but his analyst was more progressive, encouraging him to pursue his relationship with Norman. . Shayne married a high profile lesbian, as a marriage of professional convenience, to a star of New York café society, but after she met another woman, the arrangement dissolved with bitterness. The pre-Stonewall period in New York, when they were first exploring their relationship in a closeted world and an exciting gay town, is vividly recalled.

Sunshine was responsible for the career defining ‘What becomes a legend most’ ad campaign for Blackgama furs, left the high pressure ad world to become a full time artist, but had to make up for a lot of lost time in the fast changing contemporary art world. Shayne left acting to become a casting director, working with David Susskind and the notoriously difficult producer David Merrick, before becoming a producer and eventually powerful head of Warner Brothers television. Even though it was an open secret, his high stakes money job forced him to be pretend Norman didn‘t exist.

The stresses of their jobs eventually strained their relationship, but outside of a few painful flirtations and a bout or two of cheating, the couple continued to strengthen their relationship. Sunshine even returned to New York at the behest of Frances Lear, recently divorced from TV producer Norman, to launch her magazine. Frances, the real life model for Bea Arthur’s character “Maude” had a love-hate relationship with him.

Celebrities pop up in some hilarious antidotes. Shayne never forgot what it was like scrapping by for acting jobs and was known for fairness and respect in his treatment of actors, even as a mogul. He was also one of the first casting agents to hire blacklisted writers at the end of the McCarthy era. He punctures some sacred stage and film stars, but not maliciously- including Marlon Brando, Lena Horne, Katharine Hepburn, Lee Radziwill and one priceless encounter with Bette Davis. Actually Shayne’s Hollywood stories, mostly about highly commercial TV shows (Bourne Identity, The Thorn Birds) are not as interesting as Sunshine’s descriptions of the ad and art worlds of the time.

The couple only touch glancingly on the devastation of AIDS in the arts, mostly recounting the heartbreak of watching the decline of their neighbor and friend Rock Hudson. Mostly though, this is a candid and inspirational memoir of love and commitment told by both men with heart and humility. Actually, their story could make a hell of a mini-series. Let’s see, Rock would be easy to cast, but who really could play Davis?

(10747)
$4.79 (as of January 21, 2021 - More infoProduct prices and availability are accurate as of the date/time indicated and are subject to change. Any price and availability information displayed on [relevant Amazon Site(s), as applicable] at the time of purchase will apply to the purchase of this product.)