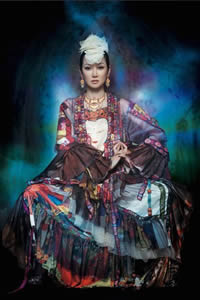 China’s restrictions on free speech are proving a hindrance to its emerging musical talents. Artists are unable to pursue controversial topics and have little crossover appeal. However, Chinese Mongolian East/West fusionist Sa Dingding has carefully avoided areas of controversy and has taken the world by storm. Unlike the adolescent army of teen poplets and clean-cut heavy metallers, Sa Dingding does not showcase every aspect of her being at point blank. Singing in Tibetan, Mandarin, Sanskrit and even her own made-up language, she maintains a sense of mystery and depth to her music.

For Dingding, success is about a more noble cause, her biggest ambition is to share her music with a wider audience and create a cultural bridge connecting the East

and the West, perhaps even help to reverse the controversy engulfing her native country in what was hoped would be its showcase Olympic year. Earning wide acclaim for the re-release of her solo debut, Alive (Wrasse Records; U.S. Release (Universal Records): July 29, 2008), this talented singer’s search for an understanding beyond language is far closer to being discovered than we could have ever imagined.

Born in Inner Mongolia to a Mongolian mother and a Han-Chinese father, Sa Dingding’s connection to China’s little known cultures runs deep. As a young girl, Dingding lead the life of a nomad with her grandmother (in spring they stayed in a tent in the Inner-Mongolian grasslands and in the winter moved to a house in the city called Xilinhoti, about 650 km north of Beijing). During these early years, the beauty of song colored her childhood. Hearing people sing freely everyday in the grasslands encouraged her to live her dream of becoming a singer. When she turned six, she moved with her parents to Jinan, Shandong Province, just south of Beijing.

She continued traveling around Eastern China with her family until they arrived in Beijing in 2001. There, she decided to pursue her dream of becoming the singer she, as a child, had always dreamed of becoming. Dingding studied music at the Technical Arts School where she learned the philosophy of the art, and developed an understanding of the sights and sounds she had felt as a child. She never forgot the sense of freedom and love of song she first encountered among China’s Mongols.

At the age of eighteen, after coming second in the National Youth Singing Competition, she released her first album after being spotted by one of China’s dance music producers. Although earning the title of ‘Best Dance Music Singer’ in China, Dingding was uncertain about her step into music stardom.

Taking control of her career, she unleashed her creative spirit and pushed her musical boundaries through her studies of Buddhism, Dyana Yoga and Sanskrit. During her search for a more traditional sound, Dingding also learned to play the ancient zheng (a 25-stringed Chinese zither), Mongolian horse-hair fiddle (a bow-stringed instrument with a scroll carved like a horse’s head) as well as Chinese drum and Chinese gong. With the help of a friend, she soon began recording demo versions of mantras, Tibetan chants,

Sanskrit poetry as well as the songs sung in her self-created language that generated from the emotions evoked by the music.

Alive (known in China as The Life of 10,000 Things) is Dingding’s major label debut and has sold over 2 million copies in her homeland. With the help of musical mentors He Xuntian and Zhang Hongguang, Dingding blends ghostly ambient electronica with a voice that’s strange, yet alluring. Unafraid to venture into the unknown, she sings in her own made-up language, uncovering the deeply personal in songs like “Oldster by the Xilin River” and “Lagu Lagu”. Others, such as the frail “Qin Shang” and “Tuo Luo Ni” (in which Dingding sings the Sanskrit scripture found in every Buddhist stupa, the sacred towers that grace every Buddhist place of worship) embody the ethereal beauty of Dingding’s vocal talent, while the maverick “Holy Incense” and “Alive” swell into powerful musical hybrids. The sounds she captures on Alive translate China’s staggering cultural diversity into gorgeous global sounds.

The freedom of expression that Dingding feels in her work and encourages in her listeners is one element of Chinese culture that she longs to share with the world. One song, “Flickering with Blossoms” was based on lyrics submitted to her blog by Xian Die, a young woman living in Southern China. Dingding’s idea of posting a melody and asking listeners to contribute lyrics is truly a thoughtful way of giving back to her loving fans.

Another source of Dingding’s inspiration are the little known cultures she grew up with as a child. As a student, Dingding traveled to Yunnan Province in southern China, in search of ethnic music. She wound up in a Lagu village, where a Tibeto-Burman language is spoken. There, she heard a chorus sung in four-part harmony that villagers swore their ancestors had learned from an 18th-century Christian missionary. She was so taken with it that the villagers’ song became the opening for one of Alive’s tracks, “Lagu Lagu”. By shedding some light on indigenous cultures, Dingding hopes to create awareness and understanding of their way of life.

Though Dingding comes from a country that has claimed sovereignty over Tibet for centuries, she is not afraid to express her love for the mountainous region. The song “Mama Tien Na” uses a Tibetan chant expressing gratitude to all that bring enlightenment. To some, this expression of unity is mistaken for liberation and has created criticism towards her music. Others have declared the dressing-up of Dingding in ethnic clothes to be little more than a record company-marketing ploy.

Dingding is no political critic of the regime in Beijing, which has faced growing international condemnation for its brutal crackdown on recent anti-government protests in Tibet. Her hope of creating better communication between people in the East and West is her greatest ambition. And while her music and performance may seem pastiche to some, it is merely a way of expressing her love for Chinese culture. Amongst Asia’s artists, few can say much about their culture, but that long forgotten past and exoticism in Dingding’s heritage meld into a sound and look that strives to bring nostalgia to each and every one of its listeners.

Dingding is now a regular performer at CCTV and MTV events, including the 2006 MTV Style Gala and the 8th CCTV-MTV Video Music Awards. In April, she traveled to London where she was awarded the prestigious BBC Radio 3 World Music Award in the Asia/Pacific category, a move coinciding with the re-release of her album, Alive on Wrasse Records. Her U.S. album was released July 29 through Universal Records. She performed at the World Music Celebration Prom at the Royal Albert Hall on July 30th, the Harrogate Festival on August 1st and then returned to Beijing for a special concert during the Olympics.

Despite being a big hit in her homeland and having caught the attention of European DJs, music producers and enthusiasts alike, Dingding has faced much criticism for her music. However, she has not once backed down from her role as musical liberator. Dingding’s dream is an important one, one that European’s have grown to appreciate and one that the U.S. will surely value as well. With an ambition for growth and a song in her heart, Sa Dingding is not just another girl.