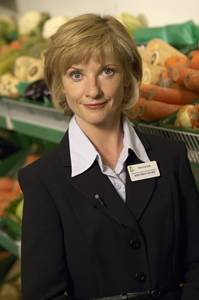 Just as the U.S. presidential candidates begin to blanket the airwaves with promises that we doubt they can keep, along comes Masterpiece Theatre’s The Amazing Mrs. Pritchard, the entirely entertaining tale of Ros Pritchard’s rocket ride from West Yorkshire to 10 Downing Street.

This PBS Masterpiece Theatre miniseries, starting October 21st, is the charming fable of a middle class woman who, by happenstance, becomes the leader of a political movement that sweeps her and her Purple Alliance party into office. The series follows Ros Pritchard’s spectacular rise to power and explores the opportunities and burdens that public office creates for her and her family.

Ros Pritchard is the efficient, demanding, yet beloved manager of the Greengages Superstore in rural Eatanswill, when the two local candidates for Parliament engage in a fistfight in front of her store. She breaks up the scuffle and chides the candidates, not only for their inappropriate behavior, but also for their lackluster uninspired campaigns. As the TV cameras whirl, she exclaims, “I could do better than you lot.”

By the end of the day, and much to the surprise of her husband and two daughters, Mrs. Pritchard has impulsively filed as a candidate for Parliament herself. Her charisma, commonsensical frankness and her clarion call for the public to take responsibility for its government, create a groundswell of support that carries her party into the majority and Ros into the Prime Minister’s post, succeeding Tony Blair.

We sympathize with Ros Pritchard in her initial panic as she realizes how ill-prepared she is to assume her duties. We cheer her as she finds her way, takes on Mr. Bush over Iraq, inspires her country to take action against global warming and outmaneuvers her Parliamentary opposition.

We also view her family’s reactions to her new life, which ranges from the clichéd, “why don’t you have time for me anymore?” to her husband’s mysterious opposition to scrutiny of his past. Her older daughter’s teenage angst and selfishness bored me. The story line about her husband’s past and its possible affect on Ros’ future seemed studied and stilted. I much preferred watching the details and intrigues of Ros’ public life to the predictable deterioration of her private life.

The individually distinctive and collectively strong women who are Ros’ Chancellor, financial backer, Home Secretary and other advisors are well conceived multi-dimensional characters who bring sophistication and complexity to the series. It isn’t often that women in power are portrayed with such texture and nuance.

Though The Amazing Mrs. Pritchard seems to be a hybrid of West Wing and Mr. Smith Goes to Washington, it retains its integrity through the amazing performance of Jane Horrocks (Absolutely Fabulous, Life is Sweet) as Mrs. Pritchard, the terrific supporting cast of Jodhi May (Daniel Deronda), Janet McTeer (Tumbleweeds, Portrait of a Marriage) and Steven Mackintosh (Our Mutual Friend), the high production values and the sparkling script by Sally Wainwright.

Sally Wainwright has created a captivating character in Mrs. Pritchard. She is smart, animated, energetic, optimistic and has faith in the right-thinking of her constituency. Unlike the U.S., the U.K’s parliamentary system and extremely short election timetable makes the fable of Mrs. Pritchard’s meteoric win just believable enough to sustain us.

Watching Ros Pritchard cut through the noise of politics as usual to accomplish her goals gives us hope and helps us forget momentarily the sad state of the modern political process. The Amazing Mrs. Pritchard is a pleasure to watch.