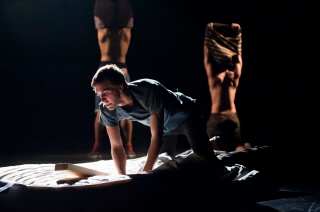 Cast members in a scene from “THEM”
Photo by Ian Douglas

A re-creation of a show first presented at Performance Space 122 in 1985, “THEM” is a portrait of gay male youth in words (by novelist Dennis Cooper), sound (guitarist Chris Cochrane), and movement (devised by Ishmael Houston-Jones in collaboration with his cast of seven). It’s not any kind of rainbow-flag celebration of gay life, but a dark and honest evocation of the complicated interplay of fear, longing, tenderness, and hostility that young men experience in their grappling toward intimacy. A performance piece born out of a very particular East Village aesthetic, “THEM” is not a play by any means. It’s more of a dance, but a dance centered not on steps but on actions that represent without exactly illustrating the stories that Cooper reads, standing in a corner of the bare space speaking into a handheld microphone. But it is as much an elegy and an alarm.

While Cooper is best-known for novels and stories populated by blank stoned post-adolescents having numb sex and nihilistic encounters with older men who idealize and exploit them, he started out as a poet unafraid to mix the simplicity of rock lyrics with explicit homoerotic imagery. The title of this performance refers to a group of casually dressed men he observes having sex, perhaps in a park in Los Angeles. “I thought about love. I think I confused what they did with it. But my belief made the day great.” His simple, evocative prose serves as interludes between the dozen or so discrete dance sections, which proceed sometimes in silence, sometimes to the keening, screeching soundtrack Cochrane creates hunched over his guitar and amp at the back of the stage.

Much of the dancing is a variation on contact improvisation, capitalizing on that form’s erotic implications — come closer/get off of me, connection built through tension. In both his solo and group work, Houston-Jones has often created physical scores that look brutal, verging on sadomasochistic. The duets look as much like wrestling or fighting as dancing or loving. There’s a lot of falling and crashing, like figures in Robert Longo’s famous paintings from the early 1980s. One man (Niall Noel) pushes another (Jacob Siominski) down onto a mattress, kneels over him, turns his head, picks him up, they do it again and again. A curly-haired lad (Jeremy Pheiffer) bats pennies with a 2×4 while Cooper reads a list of gruesome police-blotter-like reports of deaths, many of them suicides. Two men (Noel and Enrico D. Wey) walk back and forth, bumping up against one another in a dance of ambivalent cruising, with looks on their faces of indifference masking fearfulness and yearning. Each of the dancers gets a chance to shine. Wey has a particularly riveting solo.

AIDS haunts the piece as an unspoken subtext. Joey Cannizarro slams his 2×4 on the mattress while behind him two other men pull up their shirts revealing bare backs. A spoken passage by Cooper about a desultory pick-up in a rock club sets up the most infamous dance in the show: a blindfolded dancer in white briefs and a dress shirt on backwards (Arturo Vidich) is led onstage with a dead goat (stinking to high heaven), with which he performs a short brutish pas de deux on the mattress — a stylized image that mashes together grungy sex encounter and dance of death. In the climactic group dance, each performer picks up a sequence of gestures that seem enigmatic until you recognize that they’re checking their necks, their armpits, their groins for swollen lymph nodes. By the end, Pheiffer has become a kind of stand-in for Cooper’s narrator. He repeats the first speech and then goes around to each of the men checking their glands for disease. Some of them fall. Only a few are left standing.

The re-creation of “THEM” is, among other things, a beautiful and powerful act of cultural transmission. Three older gay male artists look back at a creatively turbulent era of embattled sexuality, while a freshly energized band of younger men attest to the vitality of these images. And both pay tribute, silently, to the men who didn’t survive.