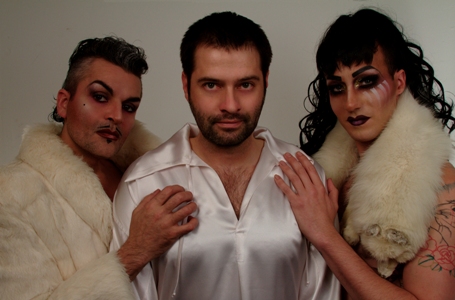 The first annual Tiara Sensation avant-drag pageant was birthed into the world by the SomeThing team of VivvyAnne ForeverMore, DJ down-E, and Mr. David, aka Glamamore. It was an only-in-San Francisco, queer-freaks-do-it-better, oh-no-she-didn’t, genius night out. Co-host Mr. David stated, just before the pageant winner was announced, that all the queens were gorgeous and gave fabulous performances. That wasn’t just generous, it was necessary. Experimental, messy, and postmodern drag in San Francisco (since the Cockettes, since Klubstitute, since Jerome Caja and Phatima at Uranus, since Kiki and Herb, since the early days of Trannyshack…) means that almost every queen or king invents her own genre of performance. That makes pageant judging either ridiculous, impossible, or ummm intuitive. How to compare Alotta Bouté’s sophisticated and super confident Harlem Renaissance approach to burlesque with Phatima’s minimalist reciting of Journey’s “Don’t Stop Believing”? Bouté is a high-femme diva with massively voluptuous and real T & A whose wig and costume owe as much to Patti LaBelle, Josephine Baker and the un-named black femmes of history as to anything that drag queens (of any race) have originated. Phatima is a gender-queer life artist famous for legendary go-go dancing at Uranus in the ’90s. Neither of these performers would ever be included in most drag contests, especially outside of San Francisco. Of course with today’s post/feminist queer eye, Patti is a faux queen and Baker is recognized as pioneering the re-appropriation of minstrel that contemporary SF queens now take for granted.

We’ve seen a faux queen win a major drag title in San Francisco. At Trannyshack we weren’t surprised when drag kings were included in the performance line-up, and we grew to expect all manner of queens with diversely gendered back-up dancers. But when Fauxnique won Miss Trannyshack 2003, she cleared a path not just for other women-who-dress-like-men-who-dress-like-women but she participated in a movement of RG’s (real girls to some, cisgender females to others) queering gay male spaces and stages. Female roles at the drag bar expanded from butch drag king and adoring fan fag-hag to include femme dyke fashionistas, faux queen dignitaries (including Scissor Sister Ana Matronic), transwomen, and the new gen of women—queer and hetero, with their boyfriends or boi friends—who feel at home in gay spaces, some who have been bff with queer boys since middle school. It feels awfully suburban to try to describe this scene or give some historical context to explain how a drag pageant in San Francisco could have, among its four judges, a faux-queen called Hoku Mama Swamp who said she was looking for performances that were retarded or offensive (in a good way), Gina LaDivina, an icon of late-night queer San Francisco and celebrated as the $65,000 silicone wonder, and Sister Roma, a local drag celebrity, journalist and community organizer with the Sisters of Perpetual Indulgence. The Sisters are simultaneously a real holy order, a camp political satire and an international community.

All this attempt at context, but how to describe the performances? Co-hostess VivvyAnne ForeverMore opened the show with an insane number. She and Mona G. Hawd appeared on giant stilts extending from both arms and legs, like lady insects with massive thorax/abdomens. They looked fucking weird, or fucking great. The audience screamed. Cross-species drag. Snap. The red veil and plastic wig kept falling to obscure Vivvyanne’s face. In this kind of poor-theater drag show, we expect this kind of homemade craft disaster. In fact we love it. And the only thing better is when the queen figures out how to fix or destroy the failing headdress without fucking up the lipsynch. Snap snap snap.

Contestants were judged in two categories, presentation and talent. For presentation, ‘Lil Miss Hot Mess arrived in gold lamé spandex leotard and tights with a lightbulb on her head and an 8-foot plank of lightbulbs held across her shoulders. A gold six-pointed star made of craftily painted cardboard was attached at her crotch. Nodding her head to the music, the lights came on sequentially, one for each day of Hanukkah. Drag as living menorah. She was only the second queen on the stage but many of us felt that we were already looking at the winner.

Political critique flourished at Tiara Sensation. Phatima’s presentation outfit involved a one-of-a-kind, DIY couture, plaid jacket. On the back was a quilted swastika of American flag stars. ‘Lil Miss Hot Mess and Monistat both cited queer protest history in their background videos. ‘Lil Miss Hot Mess took the It Gets Better Project and flipped it furiously, seizing the YouTube airwaves from the insincere politicians and pop stars and giving it back to the fierce actions of those who took the streets from MLK Jr. to ACT UP. With a gospel choir in rainbow-colored robes, ‘Lil Miss Hot Mess led the full congregation in an ecstatic church revival of revolutionary gay pride, lipsynching ecstatically “everything’s gonna be all right. It’s gonna be OK,” from Dolly Parton’s “Light of a Clear Blue Morning.” And somehow she used camp to trump irony (just like Dolly!) and we clapped along, healing ourselves and honoring the ancestors by raising energy in the queer Temple.

Elijah Minnelli and two backup queens wore full drag face and long wigs with giant six-armed cockroach costumes. After a video of Minnelli crying over spilled milk, the roach queens emerged from behind giant replicas of the milk, cereal and sugar in the video. When Destiny’s Child’s “Survivor” burst from the speakers, the crowd roared. The cockroach as survivor; the queer as cockroach. The adamant repetitions of “I’m a survivor, I’m not gonna give up, I’m gonna make it” speak as much to a showgirl’s efforts to triumph as to the every-queer in the audience knowing that we have to fight just to survive. Like the cockroach, we have always been here and always will be. (Of course the Destiny’s Child video of this song is noted for its silly blacksploitation and sexploitation, a neo-minstrel of black female exotica so problematic that it survives as a cult classic and therefore a drag classic.) As for every queen inventing her own genre, I recognize that there were two numbers in one evening where interspecies drag resulted in glam lady insects.

I’m tired. It’s 3 a.m. The buzz has worn off, but I haven’t finished telling you about all the crazy wonderful surprising performances that happened. Mercedes Monroe performed a virtuosic lipsynch (Ella Fitzgerald, perhaps?) that seemed it might be too-classic-drag-for-this-pageant. I didn’t pay attention for a couple of minutes but when I returned my gaze to the stage it was clear that something extraordinary was happening. This number was like a work of endurance art, a slow burn that grew in importance to those patient enough to focus. Try to imagine memorizing and replicating an extended vocal jazz scat improvisation of hums and oohs, growls and moans, eees and ayayays. This bitch (as in superstar diva showing us all that we don’t work hard enough) hit every note, every slurred syllable. This was Cirque du Soleil, you’ve-never-seen-this-before kinda shit. The longer she endured, the closer we gathered together to focus on her mouth’s mimetic acrobatics. At about the 6-minute mark, she pulled the mic from its stand and raised the energetic stakes. We went with her, twitching to every perfectly timed pelvic thrust and shoulder punctuation, continuing to marvel that she was still perfectly aligned with the vocals. When the song finished, she was triumphant, and we made a lot of noise in gratitude.

By the way, ‘Lil Miss Hot Mess was crowned Miss Tiara Sensation, and she deserved it. And yeah, the whole event was near perfect thanks to the outrageous dedication and vision of all contestants, hosts, judges and crew. People who think they need to win grants to make art (or community or revolution) really need to visit a weekly drag bar or annual pageant. The audience at Tiara Sensation was really cute and well-dressed despite their sometimes trendy conformity, but they were too few in number. I blame that on the too-expensive tickets, and not on the rain.

P.S. The expensive tickets hopefully generated some profits that will be shared with TheOffCenter, a burgeoning crew of queer artists working to establish a venue for queer performance after the demise of Mama Calizo’s Voice Factory. The Offcenter’s next project is a co-production with my own Zero Performance, a 10-hour marathon of queered performance called “Too Much!” on Jan. 23, 2011, at Dance Mission, San Francisco. Last year’s “Too Much!” was legendary by its fifth or sixth hour. Don’t miss it.