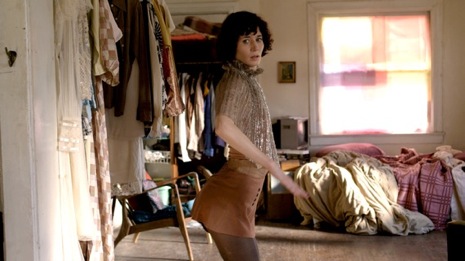 Miranda July as Sophie in “The Future”

Seeing Miranda July: The Woman Behind The Future

In person, Miranda July looks very much like the characters she plays in the two movies she has written, directed and starred in: the boldly idiosyncratic (and sexually daring) “Me and You and Everyone We Know,” and her just-released surrealistic and darkly comic romance “The Future,” a film that won her the Camera d’Or at Cannes this year, and whose promotional tour occasioned our recent meeting in San Francisco. That should not be surprising, since July plays herself in both films, or at least a close facsimile of herself. Indeed, she is the center around which much of her creative work revolves; she is in a way her own creation, either as a conceptual artist, a writer, or in this case, a filmmaker. The obvious next step, at least when referring to her film career, is to compare her to Woody Allen, who also starred in the films he wrote and directed, but more importantly, who also created a persona who returned over and over in his movies, whether he was called Alvy, Isaac or Sandy Bates.

And just who is the persona Miranda July creates to play in her own movies? It appears that the characters she invents for herself are very much like who she is in real life, at least from the limited observation I was afforded. My first thought upon seeing the waiflike

director as she sat down to attend a brief roundtable interview with me and two other journalists was just this dualistic nature of art and reality: How very much she looked and moved like her movie self, short curly hair, carefully chosen outfit, slow, careful gestures and all. She’s a thin reed of a woman, but not too thin, pale but not too pale. Her complexion is actually startlingly beautiful and unmarred. In an empire gown, she would look right at home in a Jane Austen novel; her manner, diligent and calm almost to the point of stillness, also reminded me of a Jane Austen character, the prettier-than-she -thinks-heroine who somehow—through meticulous devotion to her own individuality—finds herself surviving the misfortunes that befall an intelligent, adventurous and yet self-questioning young woman. Here, too, I am not only speaking of the Miranda July I saw in person, but also Christine Jesperson in “Me And You And Everyone We Know” and Sophie in “The Future,” the women she plays in her two movies.

The writer/director/actress encouraged this idea of how art and life intersect as she spoke of how her own life informed at least the tone of her newest movie at the beginning of our interview. “The first kernel of [“The Future”] was when I was editing the first movie, which was a very dark time for me. I was going through a breakup and here I was editing a relatively light, funny movie and I remember thinking, okay, I really have to try and show this other kind of feeling…this side of life where things do not always magically work out. That was the seed of it, and the first image was the idea of stopping time,” she revealed, alluding to one of the surreal plot points in “The Future” that eventually became the superhuman power of her character’s live-in boyfriend Jason instead. Who wouldn’t wish that they could stop time after a breakup; to stop it before the breakup occurred?

Much as I understood the desire to stop time in this context, I felt a sudden analytical urge to give the author my own interpretation of Jason’s ability to stop time as a typical male fantasy, a vestige of a young boy’s obsession with superheroes, and also a more common male desire to “rule the world.” In fact, early in “The Future,” Jason (impeccably played by Hamish Linklater) even says, “I always thought I’d be a world leader,” to which Sophie (Miranda July’s character) archly replies, “that’s not gonna happen.”

“That’s not where I was coming from exactly, but I can totally see that,” Miranda July politely replied upon hearing my own reasoning. She went on to explain that the screenplay that resulted in “The Future” went through several years of writing, years when a lot of other things happened, and somewhere along the way, she no longer felt the urge to be the one who stopped time.

One very important event that occurred during the six years between her two films was her marriage to Mike Mills, the director of “Thumbsucker” whose own second film “Beginners” is already enjoying modest success after its release this summer. An artist with multiple talents and interests himself, Mills seems like the perfect Mutt to July’s Jeff. One can’t help but wonder if the almost otherworldly synchronicity of Sophie and Jason—the thirty-something couple in “The Future,” who seem like matching socks—mirrors in some way an eq

uivalent pairing of the two artists. It only follows that the primary concerns of “The Future”—the fear of settling down and the realization that dawns on people in their 30s that life is finite and there are only a limited number of experiences one can have—would in some way be reflections of Miranda July’s own life concerns, as a woman in her mid-thirties who has finally settled into marriage herself, and with it the realization of promising to forgo all other men, all anticipation of first-time sex from now on. And much as Sophie and Jason almost dread the responsibility that surrounds their decision to adopt an abandoned and sickly cat, this newly married thirty-something wife and forty-something husband (Mills is forty-five) must be ripe for the similar, and inevitable, decision over whether to have children or not. And if so, when?

This question invariably clouded my thoughts during the interview, and when another interviewer asked July, “What’s next for you?” I couldn’t stop myself from my own presumptuous remark: “Having a baby?” When the inevitable laughter died down, she replied, “That’s personal,” and then after a brief pause, she added, “But I am thirty-seven.”

“I had my first at thirty-eight,” I blurted out, feeling like I was talking to a woman I’d just met at a party rather than a journalist to a famous movie director during an interview. I couldn’t help myself. So much of “The Future” reminded me of my own life and the way it twisted and turned through boyfriends and jobs, adopting a cat as a way to try out motherhood, and the biological clock ticking louder and louder as I kept waiting to do something incredible.

“That’s good to hear,” she replied. And that, however slight, was all I needed to hear. Of course, then July went on to elaborate in more specific terms on what she was going to do next, and if nothing else, the future is full of artistic invention.

“I’ve finished a book that just went to the printer—actually published by McSweeney’s, a company here in San Francisco—that’s coming out in the fall. It’s called “It Chooses You,” and it’s a non-fiction book that has my own writing as well as interviews that I did with people selling things through the penny-saver classifieds, which was how I met the old man in the movie, the same way that Jason does….which was a whole unrelated project. The fact that I ended up casting Joe Putterlik in the movie came from this project. So it tells that story as well as a lot of others…. And then I’m working on a novel that will be many years away, I’m sure.”

Upon hearing this, I realized that Miranda July is in one very important aspect quite different from Sophie, the character she plays in “The Future.” Unlike Sophie, seduced by her own creative paralysis into indulging in the fantasy of being a man’s passive, sexual object—as July explained Sophie’s impulses in our interview: “…To live like a child and not have to try, to not have the burden of having to invent yourself”—Miranda July is an ambitious artist who has so far been amazingly productive. For this woman, life may be finite—as swiftly slipping into the future as it is for all of us—but it looks like she is determined to be an active participant, even if it means she has to constantly invent herself.