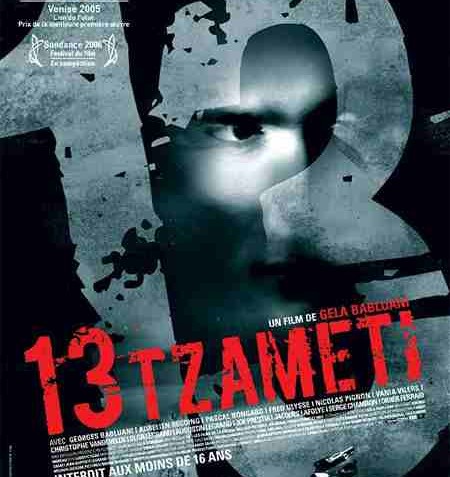 First time writer-director Gela Babluani certainly does one thing right with his feature, 13, if he ever wants to make another film, and that is get noticed. As first films go, it&#146;s not a terribly well-written film like Whit Stillman&#146;s Metropolitan or extraordinarily well-directed like Citizen Kane. Nor does it feel like Babluani poured his soul into it the way Tsai Ming-Liang did with Rebels of the Neon God. 13 is really a calling card film, high in concept and unsubtle. There&#146;s nothing wrong with that and, as calling card films go, it&#146;s riveting, albeit much of that is owed to its subject matter.

Twenty-two year old Sebastien (George Babluani) is doing roof repair for Jean-Francois Godon (Philippe Passon), a drug addict on his last leg. Through the ceiling, Sebastien overhears Jean-Francois discussing some vague, likely illegal job that will net a huge financial reward. When Jean-Francois inevitably overdoses, Sebastien, about to be left unpaid, steals a letter with instructions for the job and goes to take Jean-Francois&#146;s place.

As Sebastien hops on a train to a pre-paid hotel room and makes secret rendezvous in remote rural areas of France, the police are doing their best to trail him. The viewer cannot possibly guess the details of Sebastien&#146;s final destination, and it will remain unspoiled here. Suffice it to say, Sebastien endures one of the most harrowing experiences imaginable with some bonus sadism courtesy of his soon-to-be primary nemesis, a man named Jacky (the always impressive Aurelien Recoing, Time Out).

This ultimate scenario is both the movie&#146;s major strength and weakness. The subject matter is inherently traumatic to the point that Babluani would have to be a director on the scale of Ed Wood to mess things up. At the same time, it feels a little cheap, a bit unearned in that Babluani&#146;s concept, and not so much the execution, does most of the work for him. Even more to the point, in order for the scenario to play out completely, certain contrivances are pretty obvious in their necessity. Because the nature of the drama relies on chance, predictable but nevertheless necessary plot devices undermine it.

Still, most first-time directors would love to be able to fashion a hand-wringer like 13, and Babluani, the son of Georgian movie director Temur, is far from an inept filmmaker. Shot in black and white, 13 maintains a strong disconsolate tone, one in which the world feels barren and uncaring. The skies are ever overcast, the characters are all dissatisfied with their lots in life, and insensible chance holds sway over their destiny. 13 did indeed get noticed. It won Best First Feature Film at the Venice Film Festival in 2005.