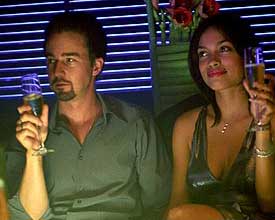 25th Hour is the new Spike Lee "joint," a term that too often suggests an abbreviation for "disjointed mess." The director’s latter-day efforts like Girl 6 and Bamboozled are nothing if not ambitious, but they suffer from attention deficit disorder and boast all the subtle nuance of the D-Day Invasion. Lee’s much-praised Get On the Bus played like Twelve Position Papers in Search of a Rally, and his last big New York statement, Summer of Sam, was a full-blown migraine from beginning to end.

There was ample reason, then, to dread the prospect of Lee’s latest ode to the Big Apple. Indeed, many of the filmmaker’s glaring weaknesses are on display once again, including an often intrusive soundtrack, overt message-making and inappropriate stylistic pyrotechnics. Surprisingly, however, the vast majority of 25th Hour is unrecognizable as a Spike Lee joint. Whether a result of his recent work in the documentary field or simply a by-product of growing older, there’s a new maturity on display here, and the result is the director’s most satisfying feature in over a decade.

Based on a novel by David Benioff, 25th Hour chronicles the final day of freedom for convicted drug dealer Monty Brogan (Edward Norton) before beginning a seven year prison sentence. Having been caught red-handed with a kilo of heroin hidden in the cushions of his couch, Brogan is intent on living his last hours on the outside to the fullest. The Russian mobsters he works for are throwing him a party in a trendy nightspot and Brogan plans to attend in the company of his girlfriend Naturelle (Rosario Dawson) and his best friends, Wall Street whiz Francis (Barry Pepper) and high school teacher Jacob (Philip Seymour Hoffman).

Francis is a slick Type A shark, while Jacob is a rumpled schlub with the hots for one of his students (Anna Paquin). In one of the movie’s funniest scenes, Francis informs Jacob that he resides in the "62nd percentile" in terms of his appeal to Manhattan’s single women. (Francis, of course, scores a 99.) There’s an easy familiarity in the exchanges between Hoffman and Pepper (and when he meets up with them later, Norton). The dialogue bears more resemblance to real speech than sloganeering (the screenplay is also by Benioff), and the relaxed, open quality of these character interactions represents welcome new territory for Spike Lee.

When Jacob stops by to pick up Francis at his lower Manhattan apartment, he is stunned by the view from his friend’s window. Twenty stories below, night crews are hard at work clearing debris at the former site of the World Trade Center.Meanwhile, Monty is meeting with his father (Brian Cox), a retired firefighter, at a bar that’s home to a shrine honoring the firemen who died in the Trade Center attack. These and other references to 9/11 run the risk of offending; to some, it will appear as though Lee is equating the tragic death of thousands of Americans with a drug dealer’s loss of freedom. More likely, though, the director simply means to convey the inescapable weight of those events on the shoulders of contemporary New Yorkers. The 9/11 material only feels heavy-handed when Terence Blanchard’s oppressive jazz score swells into full bombast over the images of Ground Zero.

Everyone comes together at the nightclub bash, including the teenage girl of Jacob’s fantasies. (Lee finally finds an appropriate use for his trademark gliding camera move when Paquin’s student floats through the bar on a cloud of Ecstasy.) These nightclub scenes are the highlight of the film, by turns funny and melancholy, and imbued with that elusive sense of the dawn coming too soon.

Lee has assembled a first rate cast here (and mercifully left himself out of it). Edward Norton puts his edgy intelligence to good use in a tricky role. Since we neither see Morty at work, nor any of the misery he must bear some responsibility for causing, the character dances perilously close to the edge of that old Hollywood standby, the good-guy drug dealer (see Mel Gibson in Tequila Sunrise for the quintessential example). Norton resists the impulse to soften Morty, however; he earns our empathy without hiding the character’s nasty streak.

While it’s true that Hoffman has essayed the role of "rumpled schlub" more often than any actor this side of John C. Reilly, his performance here should stand as his Master’s thesis on the subject. He’s entirely believable and resists leaning too heavily on the "pathetic" button. Pepper is appropriately sleazy and Cox continues his string of knockout bit parts. Dawson and Paquin are both fine, though it should come as little surprise that they are given far less to work with.

For the most part, 25th Hour works as a low-key character study and elegiac mood piece. Unfortunately, there are moments when the old Spike Lee can’t resist acting out and demanding our attention.Norton’s "fuck you" rant is already gaining notoriety, even though it plays like nothing so much as a Do the Right Thing outtake.Worse still is the counterpoint to that scene later in the film, a kind of "We are all New York" public service announcement that’s either embarrassingly maudlin or an exercise in ham-handed irony – take your pick. The grand finale calls to mind both Last Temptation of Christ and Raising Arizona; surprisingly, it almost works. These bits aren’t enough to ruin the film, but they do call to mind the lyrics of the old Who song Lee plastered all over Summer of Sam: "Meet the new boss, same as the old boss."