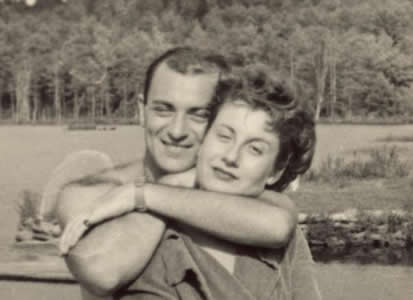 A documentary by Doug Block

At some early age we learn the "facts of life." Those are weird, but not nearly as weird as realizing that our parents "did it." So, we count the number of their children, conclude that that is the exact number of times they had sex, and then choose not to think about this ever again. On the other hand, we are interested in so many other aspects of our parents’ lives and relationship. How did they meet? How did they fall in love? Which of their kids do they love most? If they’re divorced, why did that happen? So, by the time we are adults, we have a fairly complete sense of what we do and don’t want to know. But do we? If forced to confront new realities about them, would that be welcome? If given the opportunity to find out more, would we go down that road? 51 Birch Street may be the most adept film ever made at exploring these issues.

Doug Block is a documentary filmmaker, whose earlier films focused on the exigencies of getting a movie made and web page designers. While also moonlighting doing wedding videos, he decided to shoot new footage of his parents, Mike and Mina, as they approached their 55th anniversary. But then his mother died suddenly, and he was now making a different kind of film. He had no idea as to how different it would be.

Soon after Mina’s death, Mike visited an old friend, Kitty, who had been his secretary some thirty years before. Almost immediately they struck up a romance and proceeded to marry. Perhaps more unnerving was the transformation in Mike. He became more relaxed, joyous, affectionate, outgoing. He opened up to an unprecedented intimacy with his son. And he acknowledged that there were serious problems in his marriage. But even that was the only beginning.

As Mike prepared to sell the family home and move to Florida with his new wife, a box of Mina’s diaries was discovered. And the mother who emerged was a poster child for Betty Friedan’s seminial feminist tome, "The Feminine Mystique". Friedan had described a generation of 1950’s women who felt trapped in middle class suburban life- unfulfilled and hungry for more stimulation, vitality, engagement, creative outlets, and meaning in their lives. Mina revealed dimensions and desires in her diaries that neither Block nor his two sisters had ever really understood.

With knowledge came questions for Block the filmmaker and Block the son. Had Mike and Kitty had an affair thirty years ago? Had they had been lovers during the intervening years? Was his parents "happiness" together a lie? Should his parents have divorced? What are we to make of Mina’s life and desires that were kept secret from both her husband and children? These sound like the plot points of a soap opera. But they speak to the deepest emotional dimensions of a marriage that endured for over half a century. And above all, they raise the question of what we do and don’t want to know about our parents and their marriage.

Block engages all of these questions on numerous levels. He seeks out professionals for guidance on what is and isn’t appropriate to explore. He talks with his parents’ closest friends for their perspective. The new information about the past has repercussions in his present relationship with his sisters, his own wife, and most importantly with his father. But Block and his family are not the only ones unnerved by these developments and discoveries. Could this be true of our own families as well? The family we see on screen does not appear "odd" or "unusual." 51 Birch Street doesn’t explore the American family from the vantage point of the aberrant (like Capturing the Friedmans or Tarnation). The Blocks were a nice Jewish middle class family. By no stretch of the imagination could they be described as dysfunctional or destructive. But there was something clearly amiss and missing in this marriage.

And how are we supposed to feel about all of this? Block develops an ingenious structure. For the first third of the film, we are inclined to see the father as remote, probably a philanderer, and unconnected to his children’s needs and experiences. But in the second third, as we see his happiness and learn more about Mina, we develop more sympathy for him and see how difficult she may well have been. But by the end, the film won’t give us any guidance for how to feel about this family, their history, and their situation. Some of us will choose to side with one of the parents, while others won’t. Some of us will find this excavation into a parent’s marriage to be inappropriate and unwise. Others will find it exhilarating, liberating, and helpful. Many documentaries adopt a faux objectivity while actually pursuing an agenda. Ironically, because Block shares his feelings about everything, with no pretension to neutrality, we are freed to think about our own feelings- and what we really would and wouldn’t want to know about our parents and their relationship.

51 Birch Street can now be seen on Cinemax on Demand. The DVD will be available in August. It includes fascinating new footage of how everyone in the family has responded to the outsiders’ gaze on the most intimate aspects of their parents’ lives.