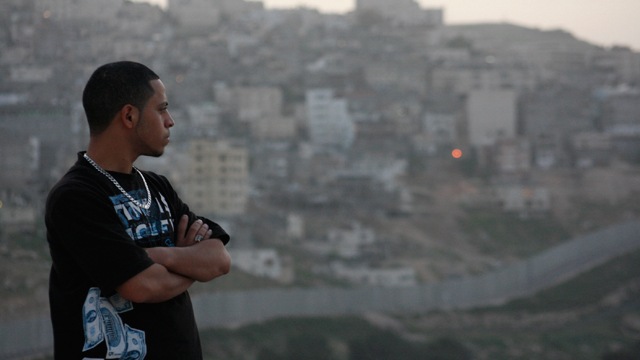 Muhammed at the Apartheid Wall in “Shooting Muhammed”

18 Films from The Arab Film Festival

Time weighs on all of us, and it’s the business of art to make our heavy labors light. One can’t expect everything to work out every day. But we can celebrate even in the darkest times, and the 2010 edition of the 14th annual Arab Film Festival was proof positive of that fact, or as a character in one of its documentaries put it, “Even the impossible is possible.”

Film festivals are always a big deal, and the 2010 AFF showcased 45 pictures from 18 countries, which screened at 5 theatres in 4 cities-San Francisco, Berkeley, San Jose, and Beverly Hills, California. The stylistic and expressive range was enormous, as was the subject matter; there were even comedies, or, as Palestinian-American director Michel Shehadeh put it in a trailer for the fest-“We Arabs like to laugh.”

The opener, which screened at San Francisco’s classic Castro Theatre to a large audience, was Algeria’s award-winning, and up for a 2009 Oscar “Masquarades” (“Mascarades”) by first-time feature director Lyes Salem, who co-scripted with Nathalie Sauzeon. Salem, who works as both a theatre and film actor, places his story in a small Algerian village where Mounir (Salem) is determined to find a husband for his beautiful but narcoleptic sister Rym (Sarah Reguieg), whom everyone thinks will never marry. Mounir concocts a story about her engagement to a big-time European businessman without knowing that Rym has been having a relationship for years with Mounir’s handsome best friend Khliffa (Mohamed Bouchaib). Salem and his cast do wonders with this material; he’s acutely aware of the fundamental absurdity of la comedie humaine, and his very Molière take on it (just about everyone’s striking a pose for their own purposes) is funny, loving, and poignant. Salem foregrounds the basically traditional nature of North African Muslim life-the first shot is of the village mosque’s minaret-in a fresh and disarming way. In his Q&A after the film, he remarked that Khliffa’s character, a pious Muslim who runs a video store, might be the ticket out of this contradiction, which may not be a contradiction after all. Salem is aided by the perfect lighting of cinematographer Pierre Cotterau, Mathias Duplessy’s evocative music and Florence’s Ricardi’s succinct editing.

Politics is never far from the surface in the Middle East, and the documentaries at this year’s AFF, though steeped in that reality, were never doctrinaire, even on the hot-button issue of Israel/Palestine. One such example was Israeli director Gil Karni’s “Saz” which observes the Arab-Israeli hip-hop artist Sameh Zakout in his hometown of Lid/Ramleh, which was burned to the ground by the Roman Legate of Syria, Cestus Gallus, during the First Jewish War in 66 BCE, (an event re-enacted in Kubrick’s 1960 film “Spartacus”), and obliterated again in Israel’s 1948 “War of Independence.” “Saz” laments the worsening situation for Arab-Israelis within Israel’s Green Line, especially since the beginning of the second Intifada, and the film is both informative and inspiring.

France-based Palestinian filmmaker Norma Marcos’ “Fragments of a Lost Palestine” is fascinating, repetitive, sometimes unfocused, and too long; cutting it by 15 minutes might make it a shoe-in for a 50-minute TV slot. But Palestinian director Julia Bacha’s “Budrus,” which I caught in Berkeley at this year’s Jewish Film Festival, is a concise and beautifully made look at this West Bank village’s fierce yet completely non-violent struggle to keep their land with its precious olive trees from being swallowed up by Israel’s Apartheid Wall, which is longer, higher, and more insidious than the Berlin Wall. Their struggle proves what active, fully engaged physical and mental solidarity against enormous odds can achieve. And it was thrilling to see the largely Jewish audience at the JFF screening cheering the Palestinians as if they were the Indians, and booing the IDF (Israeli Defense Forces) as if they were the cavalry invading their lands, which of course, they are.

Taha Awadallah’s documentary “Thyme Seller ” couldn’t be a more modest yet touching look at his mother’s daily efforts to sell her za’atar door to door to the Palestinian residents of Beit Jala in their big comfy homes.

The people in Gaza have suffered the most in the Israeli-Palestinian conflict, especially after Israel’s “state of the art” December 2009-January 2010 war killed over 1,400 defenseless civilians, left many wounded, made countless homeless, some several times over since the ’48 war, and systematically destroyed Gaza’s infrastructure. Even the dead were blasted from their graves. Samir Abdallah and Khedrine Mabrouk’s ” Gaza-strophe, The Day After” confronts these appalling facts on the ground in no uncertain terms, but “Gaza’s Winter,” a series of shorts from international directors produced by gifted Palestinian director Najwa Najar, is a mostly patchy effort.

Palestinian film student and rap artist Muhammad Mughrabi, who is the focus of Francesco Cannito and Luca Casani’s “Shooting Muhammad,” fares somewhat better than the Gazans, though his life is hardly a piece of cake. He’s forced to take a long bus ride through many checkpoints from his refugee camp to go to the University of Samaria, in Ariel settlement, in the West Bank, which has been occupied – UN Resolution 242 – since the1967 Six Day War. Muhammad is the only Arab in his department, and there’s a particularly telling scene where he’s observed working alone at a computer in the school, while the Jewish students in the next room are playing video games, surfing the net, and chatting on their cells. Even more disturbing are staged all-singing, all-dancing kid celebrations of Ariel’s 30th anniversary, complete with adoring parents and cheesy canned music. Israeli president Shimon Peres comes up and intones a speech, while Prime Minister Binyamin Netanyahu makes an appearance via video from a drably lit office, apparently to show how much he cares.

The famously repressive and corrupt Saudi kingdom is the tacit subject of the Talashi Film Group’s collection of shorts, which vary widely in ambition, style, and execution. Mohammed Alhamoud’s “Shadow” is a subtle cinema-verité portrait of a pretty young girl veiling herself before she leaves the house. Abdul Mohsen Aldadaan’s “Three Men and a Woman” is a satiric look at three scenarists looking for the right mix to make their project commercially viable with visual “quotes” from directors like Scorsese and Kazan. Mohammed Al Khalif’s “According to Local Time” is a funny take on a young man looking for a place to eat at prayer time. Hussam Alhulwa’s “I Don’t Wanna” is an animated comedy about conformity in the kingdom. Mohammed Aldhahri’s “Sunrise/Sunset” is a deeply impressive and completely silent-save for ambient sound-series of long takes a la Godard or Michael Mann, about what an innocent young boy endures in a typical day in the kingdom. It was preceded by Nadia Hamzeh’s hilarious short “Fiasco,” which shows what happens when a “strict” Muslim father drops in to see his daughter (played by Hamzeh) in her beautifully appointed L.A. home.

Claudia Cardinale and Antonin Stahly in “Le Fil” (“The String”)

“Gay films” for mainstream audiences aren’t that frequent, and usually just rebrand the same old clichés. The hero of Tom Ford’s “A Single Man” commits suicide, and one of the lovers in Ang Lee’s way over-praised “Brokeback Mountain” gets murdered; happiness, to say nothing of closure, is out of the question. And then along comes a film like “The String,” Ben Attia’s tale of 30-year-old, Paris-based haut bourgeois architect Malik (Antonin Stahly), who has been having fun big time there with men, until he comes back to the home of his mother Sara (Claudia Cardinale) after the death of his father Abdelaziz (Lofti Drizri), and finds sex and love with Sara’s handsome handyman Bilal (Salim Kechiouche).

“The String” has been criticized for the virtues that make it unique. Neither Malik, nor Bilal dies, which in “A Single Man” and “Brokeback Mountain” is the equivalent to going to hell. But the French have rarely been that big on damnation, and “The String” is very French because Ben Attia is more interested in observing rather than judging, and all his characters here “come out singing” as in the finale of Mozart’s opera “Cosi Fan Tutte,” where acceptance, and not moralism, saves the day. All the performances in “The String” are wonderfully observed and shaded. Kechiouche’s Bilal is in tune with his feelings, much another working class lover, the gamekeeper Mellors in Lawrence’s novel “Lady Chatterley’s Lover,” while Malik pushes them down like Constance Chatterley. Cardinale gives one of her funniest and most moving performances here, and the gifted Tunisians here include cinematographer Sofian Al Fani and production designer Raouf Hiloui. Paris-based composer Karol Beffa’s score blends the 12-note idiom for the anxious scenes, and evokes suggestions of Piazzolla, and Fauré for the sensual ones.

Sensuality is the name of the game in director Ali F. Mostafa’s Dubai-set first feature “City of Life.” One of the principal reasons we go to films is to see what things look like and “City of Life” satisfies that hunger by giving the audience a retinal experience of Dubai, which is superbly realized by production designer Christopher Bass, cinematographer Michael Brierley, and editor Raul Skopecz in images of startling clarity. Would that its story were as good as its looks, but a handsome international cast including Saoud Al Kaabi as a spoiled rotten rich kid, Iraqi rap artist The Narcicyst as his not quite so privileged best friend, Alexandra Maria Lara and Natalie Dormer as flight attendants, and Brit vet Susan George as a ballet teacher, give it their all. Film festivals aren’t generally known for entertaining product, but “City of Life” held its young AFF audience from start to finish and could easily be a “crossover ” hit if marketed well.

Would that Zeina Daccache’s AFF award-winning documentary “12 Angry Lebanese,” which recounts her experience in directing an all max security cast from Roumieh prison in an Arab version of Reginald Rose’s famous teleplay “12 Angry Men,” which was made into a superlative American film by Sidney Lumet, were half as entertaining or insightful. But Daccache alas is prey to all the contemporary documentary clichés. There’s the usual parade of talking heads, arty camerawork bordering on ineptitude, and what seems like a stubborn refusal to give the audience what it wants – several unmediated minutes of the play performed by Roumieh’s talented inmates.

But Zaid Abu Hamdan’s 19-minute short “Baram and Hamza,” which just won an Outstanding Achievement Award at The Newport Film Festival, feels like the real thing. And that’s funny because it isn’t a documentary, but a harrowing life-like look at the utter craziness of the Israel/Palestine conflict seen through the lens of its two talented kid actors – Israeli Yoni Sakal as Baram, and Palestinian Yosef Dweik as Hamza and their respective families – Hamza’s Palestinian one, and Baram’s Americanized and largely more selfish Israeli one. Palestine, as Brit writer and doc director John Pilger always says, is still the issue, and a very deep wound in the heart of the world, and Abu Hamdan’s poignant film makes us feel it all the more.