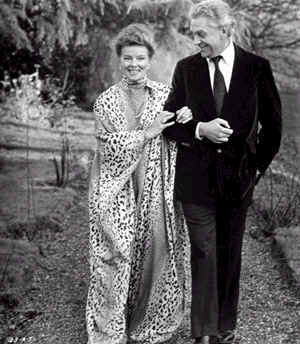 In the 1970’s, producer Ely Landau created American Film Theatre, a collection of fourteen films of fine stage plays, cast with leading actors of the day. The films were shown in theaters on a subscription basis back then and have not been in commercial release since. Now, distributor Kino International is sending the films out for festival-style showcasing in theaters prior to releasing them on video, providing welcome access to some excellent drama.

Not like movies created for the screen and no longer having the advantage of in-the-flesh live performance, theater on film is a bastard form, less than ideal. In some of these films, the sound recording leaves something to be desired and there is some awkward camera work as well. But these are minor quibbles outweighed by the opportunity to see great plays acted by superb actors. Not everyone has access to first-rate live theater; film bridges distance as well as time.

Edward Albee’sPulitzer Prize-winningplay A Delicate Balancepremiered on Broadway in 1966. A drama infused with concerns about aging and mortality, it seems remarkable coming from a writer not yet forty. Perhaps a heart attack suffered by his mother while he was writing the play provided Albee the emotional stimulus to consider the toll of senescence and the transiency of life. A Delicate Balance centers on an upscale middle-aged couple, Agnes (Katharine Hepburn) and her patient husband Tobias (Paul Scofield). Their’s is a life of comfortable privilege–dinner at home for the two of them is accompanied by candlelight, fresh flowers, a crystal dinner bell to call a servant. (No other actress can match Hepburn in catching a somewhat imperious sense of the inborn entitlement of the privileged; in an earlier time and a lighter vein, she did it, too, in The Philadelphia Story.)

As talky as Agnes is, Tobias is quiet, reserved. "There are no mountains in my life," he says, "no chasms–it’s a rolling, pleasant land." But this delicate balance of harmony and calm is deceptive; the introduction of other characters reveals dissonances in their lives and relationships. There is Claire (Kate Reid), Julia’s sister, an alcoholic and a truth-teller with a caustic tongue. She gets most of the funny lines, but laughing at them is painful–the humor is barbed with bitter realities. "We all love each other to the depths of our self-pity and greed," she observes.

Claire is close to Julia (Lee Remick), Agnes and Tobias’ daughter who has come to stay as her fourth marriage is disintegrating. Talk amongst the family members brings out resentments, complaints, mutual dislikes and dependencies. But Claire is right about the love; they do manage to sustain a delicate balance of family adhesion along with its concomitant conflicts.

The arrival of Agnes and Tobias’ best friends, Harry (Joseph Cotton) and Edna (Betsy Blair) throws the entire situation into a new perspective. Harry and Edna have come seeking a place to stay. Together they have experienced a alarming onslaught of inexplicable fear; they became so terrified that they left their home and have come to their best friends seeking shelter. They are testing the mores of friendship among their peers. People don’t simply move in, even on their closest friends, unannounced. There is a balance of formality and ritual normally observed, but here breached. And the delicate balance of friendship is put to the test.

But Albee is interested in more profound issues than social etiquette. Harry and Edna are a metaphor for the unwanted (but inevitable) invasion of disease, of aging, of mortality. Agnes talks about the aging process: "Individuality sinks into crotchet." But then she says (as her face falls), "I’m not an old woman, am I?" Julia is the most adamant about Harry and Edna leaving, pointing a gun at them. It is she who will be displaced from her room for the guests; it is she, the youngest among them, who is furthest from confronting the concerns they represent.

Harry speaks of "so much we wanted, so little we’ve settled for," a regret of those in the later stages of life for whom time allows fewer aspirations. And Tobias, in a surprising display of passion, urges them to stay: "I don’t want you here, but you’ve got the right to be here…That I don’t want you is my limitation."As she and Harry leave, Edna reflects that "It’s sad to come so close to the end and not know the boundaries." Finally, Agnes, the fulcrum of the family’s balance, observes, "Time happens to people…Finally, there’s nothing there but rust, bones, and the wind."

Between Albee’s script, laden with insight, wit and touches of poetry, and a cast of masterful actors delivering peak performances, A Delicate Balance is an absorbing and illuminating experience in the theater, albeit transferred to the silver screen.