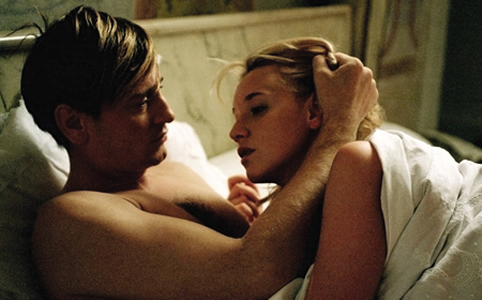 In terms of sheer output, and a beloved fan base through both the good and the bad, Claude Chabrol is France’s equivalent to Woody Allen. Almost every year, one can expect a new Chabrol film, each one a continuation of his own obsessions, each one a reworking of his own signature style.

But it is Alfred Hitchock who Chabrol is most often compared to. Like Hitchcock, Chabrol’s genre of choice is the psychological thriller, often sprinkled with a heavy dose of abnormal psychological behavior (psychosis, anyone?), and if there’s a murder, so much the better. And also like Hitchcock, Chabrol’s touch is not heavy-handed—he prefers the sardonic bite to a more serious moral tone.

Claude Chabrol’s latest examination of the unsavory human impulses that lie underneath society’s polished veneer features a May-December romance in which an older man happens to be a wolf, and a decades-younger babe is naïve enough to fall madly in love with him. The premise immediately invites comparisons to the recently released Elegy, another film about an elderly lothario whose latest sexual conquest is a young beauty who falls in love with him. But the similarities end there. Elegy is a bid for the deeper emotional resonance of commitment. A Girl Cut in Two leaves no doubt that giving into feeling is definitely not the way to go, and if you aren’t careful, you’ll end up torn apart.

The old lothario in this case is the well-known novelist Charles Saint-Denis (Francois Berleand), a self-possessed man who is catered to by his sultry, sexy publicist (Mathilda May), and his loving wife (Valeria Cavalli), whose beauty is more beatific in nature. (He even alludes to her as a “saint.”) On the occasion of the publication of his latest novel, Charles Saint-Denis makes an appearance at a local bookstore, where his eye rests leeringly on the lovely sight of Gabrielle Deneige (Ludivine Sagnier), whose mother also happens to be the bookstore owner. Gabrielle is the weather girl for the local TV station, and we already know her to be a capable judge of character; she skillfully uses her feminine assets at her job, and we’ve already seen her casually fend off the arrogant son of the town’s wealthiest family. But the haughty novelist has pricked her young heart, and she enters his lair with the innocence of a fairy-tale character.

The question that immediately comes to mind is, why would our young Gabrielle so quickly and assuredly fall into the arms of an old man, and just as quickly and assuredly refuse even a passing thought for the handsome, sexy, and filthy rich young man who has also come a courting. The answer is simple—sex is about power, and in Gabrielle’s mind, the power belongs to experience. No matter that the rich boy can buy a 200-euro bottle of wine. He fawns over her, pouts when she doesn’t respond in kind, and in general acts like a spoiled brat. (As the bourgeois brat, Benoit Magimel overacts to the point of parody, and it’s sublime.) But the more worldly-wise Charles is aloof from the beginning, and his insouciance attracts the seemingly intractable Gabrielle. He’s the one in control, and the more indifference he shows, the more her passion grows. And in Chabrol’s skillfully perverted hands, Charles and Gabrielle take this game of the sexes to its extreme, into that old-world erotic playground called sado-masochism. Not the physical kind, so don’t expect any whips or torture. No, just your plain, run-of-the-mill Story of O stuff, where the girl basically becomes a sex toy, and it’s a turn-on for both.

The poster for the movie has Ludivine Sagnier on her hands and knees, dressed in a sexy maid costume (in the movie, she has peacock feathers sticking out the back). That’s about the extent of any visual clues as to exactly what these two are up to. Those who saw Miss Sagnier in various stages of undress in The Swimming Pool may be disappointed in the lack of nudity in A Girl Cut in Two. The kinky sex is only alluded to, but its presence hangs over the whole picture like an unspoken taboo, and later serves as an important plot point to drive the story to its ironic conclusion.

As the title suggests, and Charles’s demeanor easily hints at, Gabrielle’s fate is not a happy one, but how she arrives there may leave viewers exasperated. By the time Gabrielle receives the final cutting blow (figuratively speaking), our sympathies are worn thin. It doesn’t help that Miss Sagnier, though a beautiful and talented actress, seems too street smart to play a woman of such mystery, strong and assertive on the one hand, and weak and gullible on the other. Or that Chabrol has made her appear so perceptive and calculating in the film’s first quarter.

Ultimately, our lack of sympathy for Gabrielle weakens the movie’s ability to engage us. Still, A Girl Cut in Two shouldn’t be dismissed. It’s a deeply cynical film that makes no pretense about the status of women in society, as the supporting female characters clearly demonstrate. All skillful in their roles, all representing a different aspect of how women live among men, these women are the ones who know how to survive. But none of them are happy. Charles’s wife says it all when she admits, “In my next life, I want a pair of balls.”