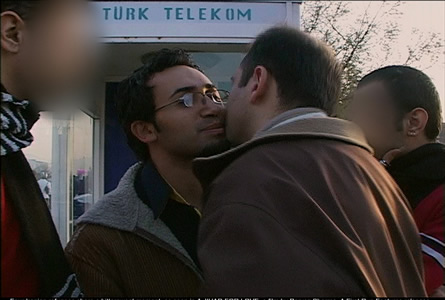 Six years in the making, A Jihad for Love is the first-ever feature-length documentary film to explore the complex and problematic intersections of Islam and homosexuality. Gay Muslim film-maker Parvez Sharma traveled to a dozen countries, including South Africa, Turkey, Egypt, Iran, France, Canada, and Pakistan, to interview his subjects, all devout Muslims and self-identifying homosexual men and women. Dramatically set against the background of contemporary global culture, each of these stories of spiritual and political struggle speaks to the world from the heart.

Coming out as a queer Muslim is fraught with danger. The interviewees in A Jihad for Love each wrestles with the consequences of being branded as “apostate,” cast out of a moral community, and declared beyond the pale of humanity. Each contends with suffering harassment, persecution, vilification, imprisonment, and worse—to be called a monster and then be stoned to death is pretty much as bad as it can get.

In the opening vignette a Muslim man is out for a ride with his two daughters along the coast in South Africa. Dad is Muhsin Hendricks, a gay imam in Johannesburg, who has come out as gay over live radio. The playful banter between father and daughters turns poignantly serious when he asks them how they would cope if he were arrested. Out of love and ingrained piety, one daughter says she’d urge they spare him a drawn-out stoning and kill him with the first rock.

The film jumps to the radio broadcast, to a caller who challenges the iman over the airwaves for “hurting the feelings of thousand of Muslims.” “[W]hat I basically do,” he responds, “is to tell [young Muslims who are struggling to reconcile their Islam with their homosexuality] to accept Islam for the goodness it comes with, and reconcile it with their sexuality, because their sexuality is not something that’s going to disappear.” Thereupon follows a stream of enraged phone callers, each threatening Muhsin with death.

Mazen is another interviewee, a beautiful young Egyptian man, one of the Cairo 52 (a group arrested in 2001 on a floating gay club on the Nile) who spent four years in an Egyptian jail. After being raped in prison, he managed to escape and flee to the West. Having fled Egypt, Mazen now must cope with another web of prejudice, that of French anti-Arab racism.

Along with the profiles of gay men, two lesbian couple are also featured. Maryam is a Moroccan lesbian now living in Paris, while her lover remains in Egypt. Even though the Qur’an is allegedly silent on lesbianism, these women demonstrate through their sometimes tortured soul-searching just how deep the implicit homophobic hatred penetrates beneath the skin.

The personal struggle of these queer men and women to reconcile their homosexuality with the teachings of their faith is both the work of homosexual liberation in the Western sense, and, more importantly, the jihad al-Nafs, or struggle with the self, which, in the Islamic tradition, is the Greater Jihad, the actual work of faith expected of every true follower of Mohammed.

Regardless of actual opinions on the personal level, the majority of Muslims believe that homosexuality is forbidden by the Qur’an, pointing both to the story of Lot (from the Hebrew Bible, or Old Testament) and to the Hadith, sayings attributed to the Prophet Mohammed. In fact, homosexual practices have a long tradition in Islamic history, art, and culture. The fundamentalist Islamic reaction to homosexual identity is itself a recent development, and its roots go back to early modern European and, in particular, nineteenth-century Victorian moral values. In other words, contemporary Islamic homophobia is a cultural import from the West as much as Western style “homosexual identity.”

In the Islamic world publicly declared “homosexual identity” is a fundamental threat on three counts. It violates the conspiracy of silence (“Todos hecho, nada dicho,” as they say in Spain: “everything is done, nothing is said.”) It is a concept imported from the non-Islamic West. (The English words “gay” and “homosexuality” can be picked out in many of the speakers’ speech, words pointing to public identity, and not sexual acts performed privately.)

Thirdly, at the core of Islamic homophobia is the violation of manhood, of submitting to penetration by another man, interpreted as an act of disobedience to Allah. In fact, “Islam” itself means “submission” [to the will of Allah]. Sexual submission in a publicly acknowledged same-sex relationship can thus be understood as a heresy of secularity, of refusing to submit to Allah, by instead submitting to (penetration by) another man. (Thus the illogical transfer of homophobia to lesbians. Taboos are, by nature, irrational.)

The gap between homosexual acts and homosexual identity could not be more glaringly clear than in this perversely illogical situation. The modern Western notion of sexual equality offers a very different model from the one operating in most Islamic cultures. Parvez captures this clash between worldviews, and spiritual views, and offers A Jihad for Love as a political act and a spiritual meditation on faith.

Faith is a funny thing. The present era’s worldwide struggle over “true” faith can be boiled down to two camps: the literalist, “legal”-minded approach, and the metaphorical, mystical, “spiritual”-minded approach. The former frames the world as a competition and seeks to dominate: religious belief is imposed upon people to control their behavior through prescriptive rules and regulations. Hatred and fear are among these practitioners’ tools. Fundamentalists of every persuasion employ such tactics.

The latter seeks to embrace the world in all its complexity and seeming self-contradiction. Faith is undertaken as a search for the divine within each seeker’s soul. The struggle is internal, the rules self-chosen and self-imposed; “God” is to be discovered in the details. In this sense, A Jihad for Love is exactly what its title states: personal struggles for love for all, an invitation to viewers, through compassion and catharsis, to join in the journey of spiritual awakening.

Sharma’s own great gifts here serve to further the cause of basic human rights for queer Muslims as both queer and Muslim. His is both testament and catalyst for progressive spiritual and political change, a first gesture to open up public, intra-cultural and cross-cultural, dialog. A Jihad for Love is itself an act of faith, of hope, and of compassion, for believer and non-believer alike.