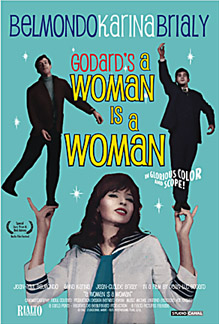 "I don’t know whether this is a comedy or a tragedy…" mutters Jean-Claude Brialy in A Woman is a Woman, just as he’s realized how far his girlfriend Anna Karina will go to get pregnant. Turning to face the camera, he addresses the audience: "But I know it’s a masterpiece!"

Jean-Luc Godard’s 1961 third feature doesn’t just break the fourth wall, it runs a train through it and then dances merrily through the rubble. His most crowd-pleasing work, this "neo-realist musical" in Cinemascope and eye-popping primary colors is a charming trifle, punch drunk with sight gags and non sequiturs.

The film opens with the sound of an orchestra tuning and the title "Once Upon a Time" written in bold block letters that fill the ‘Scope screen. The credits alternate the names of the cast and crew with descriptions of what we’ll be seeing: COMEDY. OPERA. LUBITSCH. SENTIMENTAL. BASTILLE DAY. Karina whoops "lights, camera…ACTION!" in stilted English and the movie kicks in, following her into a cafe for her morning coffee.

Karina plays Angela, a stripper who desperately wants a baby. Her boyfriend Emile (Brialy) wants no part of it. When she lays down an ultimatum &#150; it will either be him or the next man she lays eyes on &#150; Emile’s buddy Alfred Lubitsch (Jean-Paul Belmondo at his insolent, strutting best) steps in. Alfred’s already in love with Angela, and would be more than happy to help her out.

The triangle plot riffs on Lubitsch’s sublime Design for Living, but the emphatic visual style and broad humor are pure Frank Tashlin. A mishmash of jokes and skits, it’s held together only by the affable grace of the performers. This is a movie where a domestic spat features one of the combatants riding a bicycle in circles through the living room and the argument is settled with a demonstration of the proper technique of rolling the French "r." When Angela and Emile stop speaking to one another, but keep arguing by pulling books off the shelf and pointing to titles like Monster!, we might as well be watching Daffy and Bugs.

As in Breathless and Band of Outsiders, the effervescent surface keeps the avant garde formalism in check. The film is as dauntingly experimental as any Godard, with grating shifts in audio ambience levels, staccato jump cuts, explanatory subtitles and a lushly parodic score that refuses to distinguish between the mundane and the important, so that a banal conversation gets the same swooning treatment as the film’s climax. The jokes guard against pretension: this is high modernism as child’s play.

Three features into his career, Godard was still as much a critic as a filmmaker. His early specialty was juggling genres, making extraordinary leaps and connections by deliberately mismatching style and story. Debuting with the whimsical film noir of Breathless, he followed with an austere political thriller (Le Petit Soldat is what might happen if Bresson directed a Sam Fuller screenplay). A Woman is a Woman is a "musical" with no dancing and only one song, but Godard understands how the exalted language of the form (the pulsating color, the bold simplicity of the compositions, the arch acting) speaks to outsized emotions. This movie feels like a musical, even as it overturns every expectation.

From her first wink at the camera to her last line (an untranslatable pun, mangled in the otherwise beautifully restored print’s subtitles), it’s Karina’s film. She gives a dazzling performance, all grace notes and goofy charm, with one short scene that leaps out of the film, making clear how much is really at stake for Angela. This eruption of feeling is staged theatrically, with a weeping Karina staring directly at the camera. It’s all the more devastating precisely because it’s so awkward: the discomfort elicited by her direct gaze has the paradoxical effect of making the emotion that much more vivid. It’s a technique Godard refined in their next collaboration, the grim and deeply moving Vivre sa vie, with its celebrated close-up of Karina weeping along with Maria Falconetti as she watches Dreyer’s Passion of Joan of Arc. (Jean Eustache took it even further in the brutal final monologue of The Mother and the Whore, a scene so charged and intimate it makes voyeurs of its audience.)

A Woman is a Woman is minor early Godard. It lacks the knocking-the-world-off-its-axis innovation of Breathless, the formal concision of Le Petit Soldat, the gravity of Contempt and Vivre sa vie, the sheer graceful perfection of Band of Outsiders. Precious, a little exhausting in its pursuit of novelty, and not as funny as it thinks it is, it’s still astonishing. There’s more vitality, more reckless love of the cinema, in any one scene than in a dozen current films.