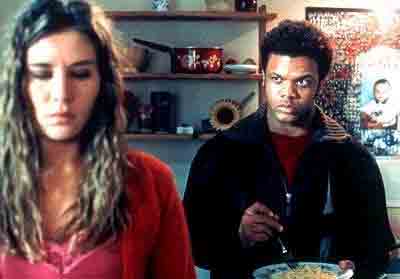 Ruth Rendell is a popular and prolific writer of detective fiction who has a particular interest in probing abnormal psychology, domestic violence, and issues of race and class. All of these aspects come into play in Alias Betty, Claude Miller’s film based on Rendell’s novel, The Tree of Hands.

The eponymous character is a successful novelist, Betty Fisher (Sandrine Kiberlain), who has split with her American husband and taken up residence in Paris with their young son, Joseph. Betty’s incredibly selfish and self-absorbed mother, Margot (Nicole Garcia), arrives in town for medical tests. That things are rather icy between mother and daughter is understandable; behind the main titles, Miller has showed them when Betty was still a girl, in a compartment of a train speeding through the countryside. Unhinged Margot goes after Betty with a scissors, leaving a long, ugly scar on her hand. Garcia takes up the great tradition of portraying mothers-from-Hell, notably in the line of the late Joan Crawford.

Then a horrible accident occurs. Joseph accidentally falls from a window and is killed. (Margot discovers the body and looks at it as if it were a strange bug; her utter lack of affect in that moment establishes her instantly as thoroughly psychotic.) Betty is inconsolable, so what’s a mother to do? Nicole casually kidnaps a boy, Jose, off the street to bring home to Betty to replace her dead son. Outrageous, of course, but Margot is completely casual about the entire affair. When Betty discovers the boy to have been himself a victim of abuse, she becomes protective of him and is no longer so sure about returning him to where he belongs.

Where he belongs is to an uncaring mother, Carole Novacki (Mathilde Seigner), a slattern waitress in a bar who has no idea which of her many bed partners was the father of her son. Her current lover, Francoise (Luck Mervil) is a decent guy trying to do the right thing with the wrong woman. When Jose disappears, the police (with no evidence) suspect Francoise; the implication of racism is clear. Francoise, in turn, suspects one of Carole’s cohorts, a passport forger who is currently working a scam selling his rich mistress’s home.

What emerges is a complex tale of relative morality–good people doing bad things, bad people doing bad things, crazy people doing crazy things. The strength of the film is in the cogent delivery of the many lines of the story and the effective performances of the entire cast. The contrast between Betty and Carole, two mothers, both motivated by the physical and psychological wounds of their past, is in their differing socio-economic backgrounds and how it affects their ability to deal with the crises in their lives. Betty’s husband offers her one solution; a young doctor with whom she has some chemistry offers another. Are any of them morally justifiable? Right and wrong are clouded in the murkiest shades of gray.

But Miller (The Accompanist, The Little Thief), while establishing well-grounded characterizations, veers off from time to time into near-farce. The resulting mixture of the serious and the silly weakens the emotional power of the story and the impact of the issues it raises. An over-the-top finale laden with unbelievable coincidences and multiple mistaken identities is also problematical. Even so, Alias Betty is an absorbing trip into the minds and motivations of people under stress as well as a keen, unsentimental look at variations on the theme of motherhood.