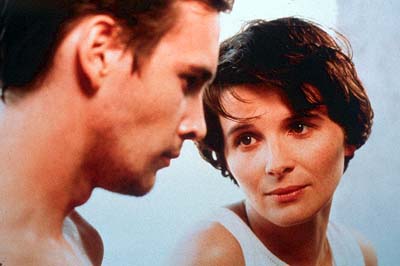 Andre Techine’s Alice and Martin is Greek tragedy in modern dress. Rather than restage Sophocles as turgid, angst-ridden melodrama (as in Volker Schlondorff’s Voyager) or insert a masked chorus into standard issue romantic comedy (like Woody Allen’s Mighty Aphrodite), it instead takes the primal subject matter of these plays – cursed families destroyed by the hubris of patriarchs, divine retribution – as its own.

Alexis Loret plays Martin, the bastard son of a Spanish industrialist (Pierre Maguelon). Martin lives happily with his mother (Carmen Maura) until, at 10, he is brought against his will to live with his father’s "real" family.

Ten years later, he flees his father’s house for Paris, where his brother Benjamin (Mathieu Amalric), a struggling actor, lives with Alice (Juliette Binoche), a violinist. Martin moves in and soon falls into a career as a male model. Eventually, he begins an affair with Alice. A trip to Granada with Alice brings on a realization about his father so profoundly shocking to Martin that it nearly destroys him. Alice spends the rest of the film struggling to save Martin by engaging the help of his stepmother (Marthe Villalonga), who has disowned him.

Techine (with co-scenarist Gilles Taurand and collaborator Olivier Assayas) has structured the film elliptically, with gaping holes left in the chronology. Martin’s entire adolescence is skipped, for instance, and we don’t learn why Martin left home until a flashback well into the second hour. The film eschews the dissolves or fades between scenes which serve in most films to note the passage of time. Instead, each scene follows the next with a direct cut: Alice and Martin’s first sexual encounter leads straight to a bedroom discussion a week later, with nothing but dialogue to help us sort through the elision.

Techine prefers dialogue to action. With a few key exceptions, we learn of events via characters discussing them after the fact. We don’t see Martin move out of Benjamin’s apartment: he mentions his intention to do so, then the film picks up several weeks later with a conversation about his departure.

It’s an odd tactic that has the salutary effect of keeping us at some remove from the action. Any film that draws on such weighty, elemental themes courts camp: without its aestheticizing devices, Oedipus Rex could play like an episode of The Jerry Springer Show. The constant talk and ellipses encourage reflection rather than identification. The strategy is reminiscent of Truffaut’s The Story of Adele H., which deflates its melodrama with short scenes, snipped off a beat or two before they’re quite finished.

Arm’s length from the story, however, is also arm’s length from the characters. Since the filmmakers have chosen to keep us disengaged, Alice and Martin is emotionally inert. (This is not the case with The Story of Adele H., where Isabelle Adjani’s performance is so extreme, so naked in its intensity, that the formal distance serves to concentrate, rather than dilute, her effect upon us.) The actors struggle against the rigidity of the film’s conception, and turn in adequate performances that never grow into breathing characters. Amalric, with the simplest role, is the exception, finding a perfect balance between easy charm and nagging jealousy.

Alice and Martin would be an intriguing experiment – a failed academic exercise – if not for Juliette Binoche. Her performance is not among her best: she never manages to overcome the schematic scenario, and she trips over the clunky dialogue. What she brings to the film instead is her face. Always beautiful, with age she has become an unparalleled camera subject. The film becomes a rapturous study of that face, its contours and impenetrable dark eyes. Cinematographer Caroline Champetier and Production Designer Ze Branco seem to have built the film around those eyes, creating a palette of deep browns and blacks that make her the focus of every composition. It’s an extraordinarily beautiful film, with the play of light on Binoche’s cheeks as telling as the dialogue.

The film’s best scene comes near the end, as she plays a tango for a wedding party. There’s no dialogue, for once, just the tension between the happy face she must put on for the paying customers and the enormity of what she’s witnessed in the past few weeks. It’s the one scene where Techine’s conception has its proper effect, drawing us in emotionally via Binoche’s sheer presence while refusing to pin down any easy identification with her. It’s an exquisite moment, and almost impossible to read: Binoche gives us no more than she gives the customers. Its mystery resonates long after the film ends.