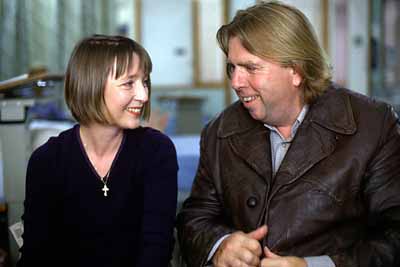 Mike Leigh’s directing credits stretch back over three decades, but it’s only since High Hopes (1988) that he has had a continuous stream of new films, often using his unique methodology of putting a group of actors together in a situation and exploring the possibilties that grow out of their improvisations before fixing on a script. He’s particularly interested in portraying the family lives of ordinary people, achieving his most popular (and perhaps most artistic) success with Secrets & Lies in 1996.

Growing his characters through the improvisatory process results in the actors playing from something that comes from inside of themselves in the first place, rather than the more usual situation of an actor grafting his skills onto a writer or director’s concept. With such solidly grounded characterizations, Leigh’s art takes off, molding that raw material into powerful films that examine the human condition with sensitivity and insight.

In All or NothingLeigh explores the lives of a family and their neighbors in a "housing estate" (a public housing project) in London. Phil (Timothy Spall), heavyset and scruffy-looking, drives a mini-cab when he manages to get up in the morning and out to work. He’s a gentle soul, but seems trapped in his unchallenging workand scant earnings. He even has to borrow from his common law wife, Penny (Lesley Manville), to have the price of a lager at the local pub; pride is long gone.

Penny works as a checker in a local Safeway–boring, repetitive work that, no doubt, pays minimum wage. She unhappily puts up with the aggressive and disrespectful rebellion of their overweight, unemployed son who spends most of his time stretched out on the couch watching television. Their daughter, Rachel, has menial work as a cleaning woman in a nursing home. She’s self-effacing and says little, rarely more than a word or two; she seems numbed by the drudgery of her work and the tedium of their domestic life.

Among their neighbors are Carol and Ron, she an all-day-long falling-down drunk, he another cab driver, prone to accidents. Their daughter, Samantha, another of the unemployed young, cruises guys around the project–whether her neighbor’s boyfriend or a strange young man who just hangs out there. The only character who seems adjusted and reasonably happy is Maureen, who works at Safeway with Penny and takes in ironing to make ends meet. She manages to keep a smile and a sense of humor and optimism about her. Her daughter, Donna, is involved in an abusive relationship.

Through a series of minor incidents and domestic scenes, Leigh explores these relationships. Together with his talented cast, they show how unchallenging work and the deprivations of living in poverty grind people down to lives of unhappy frustration. The principal recreation is drinking. When the girls have a night out at a karaoke club, Maureen gets up to sing; she’s good and is clearly enjoying herself, but she doesn’t get to finish her song, because Carol falls flat on her face in the bar. Dreams are short-lived; hopes are dashed, even when courage can be screwed up to dare to hope.

Just about every character in All or Nothing is trapped in loneliness. From the French woman passenger in Phil’s cab to drunken Carol to the pathetic older man who works at the nursing home with Rachel, they are all needy, hungry for love. A crisis strikes Penny and Phil’s family which leads Phil to confront Penny with his realization that she doesn’t love him anymore. He asks her if she does; they embrace, but she never answers his question. It doesn’t really matter, Leigh seems to be saying, they haven’t got, or can’t see, alternatives, and they’ll hang together because even though family can’t allay the oppressive loneliness that pervades all their lives, family does count. It’s all they’ve got.

All or Nothing is uncomfortably bleak. It makes no compromises, offering a hard, unblinking look at contemporary lives, lives mired in banality without promise of escape. Leigh and his actors succeed in making these characters human and sympathetic and, thus, all the more profoundly sad.