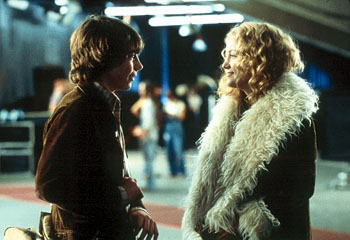 Cameron Crowe is a frustrating filmmaker. Though possessed of enormous gifts, he’s yet to make a film that’s as good as its best moments. He has elicited deeply felt performances from the most unlikely actors. He can write dialogue so unforced that it sounds like overheard conversation even while it delivers belly laughs. And scene by scene, his work is often quite touching: he has a knack for making unguarded emotionality credible. But the sincerity that allows him to hit such highs too often tips over into sentimentality, drowning his work in corny bathos. And since his skill at individual scenes doesn’t translate into coherent structures, even his best work – Say Anything and the script for Amy Heckerling’s Fast Times at Ridgemont High – is burdened with perfunctory exposition and distracting subplots.

Almost Famous is Crowe’s fictionalized autobiography. Patrick Fugit plays William Miller, a fifteen year old naif who wants to be like his hero, rock critic Lester Bangs (Philip Seymour Hoffman). Yet he’s too sweetly ingenuous and star-struck (really, just too much of a fan) to follow Bangs’ lead and rail against the decrepit state rock and roll had skidded to in 1973. On his first assignment for Creem magazine, he gets to meet a favorite band, a second-rank hard rock group called Stillwater. When Rolling Stone offers him a chance to write a feature on the band, he joins their entourage as they barnstorm the country. He’s there as a journalist, but also because he’s hopelessly in love with Penny Lane (Kate Hudson), a local groupie who’s travelling with the band.

The band assumes that they can manipulate William into writing a favorable story by making him feel like one of the gang. Since he’s a runty misfit back home, he’s delighted by the camaraderie of the road and he finds his journalistic objectivity slipping. Bangs had warned him never to befriend the musicians he writes about, but William’s in over his head. Though he’s getting an insider’s view of the ugly realities of a rock tour – the constant arguments, the posturing and pretension, the carefully maintained insulation from the fans – he’s become too attached to write about it without feeling that he’s betraying his friends.

Crowe tries to do so many things in this film – it’s at once a coming of age story, a backstage drama and a romantic comedy – that he ends up with a mess that can only be reined in at the end with the most mechanical of plot contrivances. Up to then, though, it’s such a dazzlingly entertaining mess that it’s tempting to ignore the confusion that eventually overwhelms it.

It’s a dense, episodic film, crammed with vividly drawn characters and incidents, and played at a relentless pace.Crowe piles on good one-liners and gags, even in the darkest scenes. This keeps the film light on its feet, but at a cost: the serious material is undermined by the sunny tone, so that nothing is quite as heavy as the plot dictates it should be. Crowe strains for significance but settles for easy laughs, making the film feel paradoxically both heavy-handed and slight.

Before the film gives way to sentimentality and easy resolutions in its last third, the cast overrides most of these objections. It’s a beautifully acted film, with a number of remarkable performances. Billy Crudup and Jason Lee, as Stillwater’s feuding guitarist and singer, far outstrip any of their previous work. Lee does a spot-on parody of a rocker whose band isn’t yet big enough to contain his ego. It’s an effortlessly funny performance that avoids the self-consciousness that’s marred his performances in the past. Crudup has a more complicated role. His Russell is the bandmember who most openly manipulates William, yet he also genuinely likes him. And since he’s juggling a wife back home and Penny on the road, he’s very aware of how much harm an honest piece in Rolling Stone could do him. Up until Crowe engineers a series of preposterous events to soften this moral quandary, Crudup does a fine job of playing a man who’s slowly waking up to the consequences of his thoughtlessness.

Kate Hudson’s Penny is a more problematic character. In a film that avoids painting too rosy a picture of the rock star’s world – there’s enough rancor and stupidity to dissuade anyone from picking up a guitar – Crowe goes very soft when it comes to groupies. Penny and her friends see themselves as muses, giving aid and comfort to troubadours. Crowe swallows this whole: you get no real sense of the extent of their exploitation until a jarring scene at the end that’s contrived solely to illustrate this. Since the rest of the film is a celebration of Penny’s beauty and open generosity (as the film fades from memory, you’ll be left mainly with Hudson’s blond ringlets and hazy, knowing smile) it’s a slap in the face from out of nowhere. It would be a much stronger film if we got a sense of the callousness with which the rockers dispose of these women from early on – then Crudup’s dilemmas wouldn’t seem so easily overcome. That said, Hudson is astonishing. She radiates a mysterious charisma, always seeming to know more than she lets on. There’s never a question as to why William and Russell fall so hard for her.

Patrick Fugit does fine work as William. He’s most often seen reacting, his pliant, elfin face registering his shock at what he’s witnessing even as he feigns nonchalance. He gets the worst of it, however, as the film turns serious. For all his skill at dialogue, Crowe tends to overwrite his confrontational scenes, with characters suddenly saying exactly what they’ve been thinking at great length, as though they were following bullet points in a prepared speech. As the moral center of the film, Fugit is saddled with several of these moments, and they’re beyond him as an actor.

Best of all is Philip Seymour Hoffman as Bangs. Hoffman has been tossing off brilliant character studies with such regularity that it’s easy to lose sight of how good he really is. His Bangs is the rock critic as consummate geek, home alone all night listening to old MC5 records, spewing torrents of prose on speed and cough syrup. He’s an odd father figure, but Hoffman invests him with such gravity and humor that it’s hugely disappointing when he only appears in three or four short scenes. Here’s hoping that someone films Let It Blurt: The Life and Times of Lester Bangs so that Hoffman can take this role and run with it.