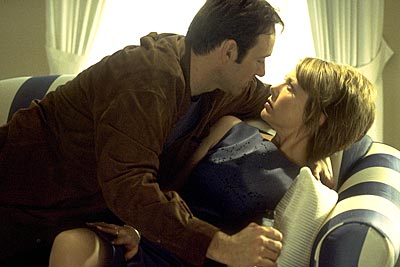 The anomie of suburban life has been done to death in American cinema, but American Beauty is a bitterly funny and beautifully crafted film, even if it does cover a lot of familiar ground. It&#146;s a movie that keeps replaying itself in your mind long after you&#146;ve left the theater, thanks largely to Kevin Spacey&#146;s lustrous performance as Lester Burnham, a cracked eggshell of a man who manages to rediscover his lost vitality.

The members of the Burnham family &#150; Lester, his success-obsessed wife Carolyn (Annette Bening), and their teenaged daughter Jane (Thora Birch) &#150; are living in an air-conditioned prison. They have all the ticky-tacky of an upwardly mobile middle-class family, but they&#146;ve lost themselves in the clutter. Lester in particular is on the verge of disappearing altogether. He&#146;s a disappointment to Carolyn and an embarrassment to Jane, but he hasn&#146;t let anyone down more than himself. He begins his days by jerking off in the shower, and he spends the rest of his time in a fog, wondering where it all went wrong. He&#146;s a receding schlump of a man &#150; at dinner he sits with his chair pulled back so far from the table that he can barely reach his plate &#150; and now that he&#146;s about to be downsized out of his job, he&#146;ll never be able to provide the fantasy life that Carolyn craves.

Everything begins to change one night when Jane introduces her friend Angela (Mena Suvari) to her parents. Lester is smitten to the core of his soul with this little blonde truffle; he can barely keep the saliva in his mouth when he&#146;s around her. His passion for her injects new vigor into his fantasies, and in turn gives a jump-start to his entire life. He quits his job (in a howlingly funny scene) and, in true Baby Boomer fashion, he begins working out and smoking pot. Mostly he amuses himself by saying what&#146;s been on his mind all these years, like a man coming out of a coma, because he&#146;s had it up to here with appearances and all the crap that&#146;s been oppressing him. ("The new me whacks off whenever I feel horny," he notifies a horrified Carolyn when she catches him masturbating in bed next to her.) His family drifting ever farther away, Lester finds that the person with whom he feels most comfortable is Ricky Fitts, the teenaged pot dealer who lives next door and who&#146;s obsessed with videotaping everything &#150; especially Jane. (As Ricky, Wes Bentley gives the other first-rate performance in American Beauty. His eerie self-possession and clear-sighted gaze make it plain why Lester would look at Ricky as a role model.)

American Beauty gives us a full dose of the luminosity and wry expressiveness that Spacey displayed in L.A. Confidential. (The way that the camera takes to Spacey&#146;s face must make other actors want to eat their livers out.) Lester&#146;s transformation in the middle section of American Beauty is rich and immensely satisfying; it offers balm to all those parts of us that feel hammered or aggrieved. Lester keeps growing, deepening, throughout the movie, long past the wonderful sequences where he&#146;s pumping iron in his garage as Dylan blares away on a tape-deck. Eventually he even outgrows his infatuation for Angela, for he&#146;s more than just an aging fart enjoying a last hurrah. By the movie&#146;s end, he&#146;s the only potent and mature person on the scene, the only one capable of selflessness and insight. And that, of course, makes everyone else want to kill him. For if American Beauty is partly about the crushing effect that adulthood and a smiley-face culture can have on our spirits, it&#146;s also about how sparingly we dole out freedom to our loved ones, and how threatening it is when they begin changing the rules.

Sam Mendes has never made a feature film (he&#146;s a renowned stage director), but he fills American Beauty with surprising and occasionally breathtaking images. One of these &#150; the swirling dance of a plastic bag that&#146;s caught up in a dust devil &#150; is precisely the type of meditative and unforced beauty that mainstream movies refuse to give us these days. American Beauty&#146;s material would crumble if it were pushed too hard, so Mendes uses a sly, off-centered way to make us register critical details, such as the wall full of videotapes in Ricky&#146;s bedroom, or the white picket fence that seems to crosshatch the Burnhams&#146; front lawn.

The movie&#146;s one truly regrettable lapse is the character of Ricky&#146;s father, a retired Marine colonel whose moral rigidity has turned him into a closet psycho. Colonel Fitts adds another layer to the Sixties subtext that courses through American Beauty, but characters like his had worn out their welcome even before Bruce Dern&#146;s military man in Coming Home. Fitts is by no means that badly drawn, and in the role Chris Cooper shows a dark and steely side of himself that&#146;s invisible in the films he does for John Sayles. But does Fitts really need to collect guns and Nazi chinaware? Does his repressed homosexuality really have to be the key to his coming unglued at the end? Characters like Colonel Fitts should be confined to bestiaries like Happiness, where the characters are kept in cages that are carefully labeled "Laughable," "Deluded," "Repellent," "Grotesque."

But American Beauty&#146;s satire is usually lighter and more fluid than that, more in the vein of Michael Ritchie&#146;s Smile or the early portions of Kubrick&#146;s Lolita. Most of all, American Beauty doesn&#146;t paint suburban life as necessarily shallow or draining. The Burnhams&#146; world affords glimpses of potential and happiness, and the movie is about Lester&#146;s coming to appreciate that a special kind of American beauty has always existed in his own life. By the picture&#146;s end, he can look at that small plastic bag twisting wildly in the wind without flinching.