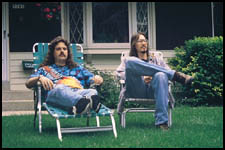 You get to see Americans and American dreams, and you won’t walk away depressed after seeing this.

That’s Wisconsin filmmaker Mark Borchardt describing his years-in-the-making epic Northwestern, but his words could just as easily apply to the extraordinary new documentary American Movie, which details Borchardt’s failed attempts to launch production of Northwestern and subsequent determination to complete the 35-minute horror film Coven. An often hilarious and thoroughly moving portrait of a man, his community and his dream, American Movie is without a doubt one of the year’s best.

Borchardt is a true blue believer in the American Dream, and he clings to it with feverish tenacity. Words spill out of his mouth faster than the speed of thought; they emerge as a sort of mangled poetry, perfectly in tune with the bleakness of his surroundings. The disparity between his vision of himself as a successful filmmaker leading the good life and his mundane reality of delivering newspapers and vacuuming crypts at the local cemetery forms the emotional core of the documentary.

Ever since acquiring an out-of-focus Super 8 camera as a child, Borchardt has been making movies. His influences include George Romero’s Living Dead series and The Texas Chainsaw Massacre, but what’s interesting is the way Borchardt describes what he admires in those pictures. He doesn’t mention the splatter and gore, but rather the gray skies, dead trees and grim, bare-bones settings. He conceives Northwestern not as a horror film, but as a down-and-dirty look at the economically deprived, fast-track-to-nowhere world he inhabits.

In order to properly bring Northwestern to the screen, he decides, he must first complete a direct-to-video horror short. If he sells 3000 copies at $14.95 apiece, he’ll take in $45,000, with which he’ll be able to do his dream project justice. So, with the help of his gentle burnout friend Mike Schank, his Eeyore-like octogenarian Uncle Bill, and a cast of master thespians, Borchardt sets out to film his macabre tale of a support group from Hell: Coven.

The pitfalls of no-budget filmmaking provide some of the movie’s most uproarious moments, such as a Coven scene in which Borchardt’s character shoves his support group sponsor’s head through a non-breakaway cabinet door. This aspect of American Movie calls to mind another documentary about the making of a low-budget horror movie, 1979’s little-seen Demon Lover Diary (which detailed the harrowing production of Demon Lover, coincidentally retitled Coven for video release). But where Diary evoked fear and loathing for its subjects, American Movie maintains an openhearted, empathetic perspective.

The film’s surprising emotional depth derives from Borchardt’s relationships with his family and friends. Some viewers will no doubt find the fried, giggly Mike Schank and increasingly decrepit and fatalistic Uncle Bill to be figures of derision and mean-spirited laughter, but they’ll be missing the point. In one of the most oddly moving scenes in recent memory, Borchardt shares a Thanksgiving dinner with Schank, Uncle Bill and a few other Coven castaways. This is a non-traditional gathering, to say the least, but the warm feeling is evident nonetheless, particularly when Borchardt drunkenly gives thanks to Schank for coming over and making him smile.

All of this unfolds against the melancholy backdrop of Borchardt’s hometown, Menomonee Falls, which emerges as another central character in the documentary. This is a Middle America of scratch-off lottery tickets, 7-11 coffee and Pabst Blue Ribbon twelve-packs – terrain rarely glimpsed in contemporary cinema. But anyone who has seen director Chris Smith’s debut feature American Job (all six of us) will recognize it immediately. That film, while a work of fiction, used documentary-style realism to hilarious deadpan effect as it traced one man’s odyssey through the day-to-day tedium of minimum wage employment. While it may not sound like a crowd pleaser, American Job deserves wider recognition for its dead-on depiction of an all-but-ignored aspect of contemporary life. Smith has marked out this fertile territory as his own, and it will be fascinating to watch him continue to explore it in future projects.

There are so many moments in American Movie that linger in the memory: Schank’s maniacal screeching during a sound effects dubbing session; Uncle Bill’s repeated attempts to nail his single line of dialogue; Borchardt camping out with his kids in a University of Wisconsin editing suite. Whether the would-be filmmaker is able to achieve his dream remains up in the air, though a look at the finished product Coven reveals flashes of wit and an eye for the sort of harsh, gloomy compositions he professes to admire (as well as some admittedly Ed Wood-level writing and acting). At the very least, his moment in the spotlight (Borchardt recently appeared on the David Letterman show and is touring the country with midnight showings of Coven) all but ensures he will sell those 3000 videos. But even if he is never able to pull off Northwestern, the essence of that dream project informs this documentary, investing it with an indomitable spirit and passion for life. This is a great American movie.