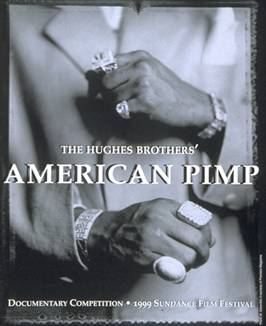 The Hughes Brothers are fascinated with bad guys. Their startling debut, Menace II Society, depicted inner city thug life with a visceral intensity that made Boyz N The Hood look like The Little Rascals. The follow-up, Dead Presidents, less successfully chronicled a young man’s transformation from Vietnam War hero to armed robber and murderer. Their next announced project, From Hell, is an adaptation of a comic book about Jack the Ripper.

Here and now we have American Pimp, a self-financed documentary shot in various cities around the United States, consisting of interviews with pimps past and present and the women who earn for them on the streets. It’s a raw, compelling and often very funny look at an underworld previously given the big screen treatment in 70’s blaxploitation fare like The Mack and Willie Dynamite – though one that leaves a bitter aftertaste. It’s not that the Hughes Brothers glamorize their outlaw protagonists, it’s that they are glamorous – outlandishly so. But they’ve also done some bad, bad things, and that’s what makes the laughter catch in your throat. It’s easy to be entertained by American Pimp, not so easy to feel good about it later.

"Pussy gonna sell when cotton and corn won’t," notes legendary San Francisco hustler Fillmore Slim, and that matter-of-fact reality is all the justification most of the movie’s colorful interviewees need. As long as prostitution is illegal, they reason, there will be a need for their "financial management and protection" services. In this case, financial management means that the "ho’s" must turn all of their money over to the pimps, who then pay their living expenses. It’s a cozy arrangement for the macks, but doesn’t leave much opportunity for advancement among the women they prey on. This is but one of the unpleasant realities the Hughes Brothers touch on, but fail to delve into too deeply.

This is not to say that American Pimp would have been better as a social harangue, but rather, to point out the pitfalls such a project presents in the first place. For one thing, the subjects of the film are undeniably charismatic. From Hollywood’s Rosebudd to Payroll of Las Vegas to Gorgeous Dre of New Orleans, it’s clear they’ve all seen their share of blaxploitation flicks. Some take two or three hours to get dressed ("gators" – thousand dollar alligator shoes – are the sure sign of arrival as a player). Cartoonish, larger-than-life personas are the order of the day, ranging from the goofy (D.C.’s Ken Red) to the downright chilling (New York’s R.P.). Most have a quick, wicked sense of humor and throw off one-liners with practiced ease. But they are also well-versed in the art of self-deception.

Though they deny getting their prostitutes hooked on drugs (for economic reasons, otherwise "the pusher would get paid first"), a few do admit to hitting the women (with the obligatory rationalization that it happens only when necessary). They would never call them "women" of course; "bitches" is the preferred term and no doubt the word used most frequently in American Pimp (one jolly hustler helpfully points out that "bitch is a pet name"). C Note of San Francisco describes the art of pimping as "stealing a bitch’s mind," and indeed, when we see the hollow, zombie-like stares on the faces of the women in this film, it’s easy to believe him.

All the pimps we meet are black. All but one – the one who owns the Bunny Ranch in Nevada, where exchanging money for sex is legal. In vivid contrast to the streetwalkers we have seen earlier, who take their chances with potentially violent or disease-ridden johns, these bunnies even have medical benefits. If you’re going to be exploited for a living, this would seem to be the way to go. Maybe that’s the buried message of the film – a plea for the comparative sanity of legalized prostitution. Meanwhile, at least one former mack has gotten out of the game for good. "I’m a blues singer now," he confesses. "But at least I still get to dress this way."