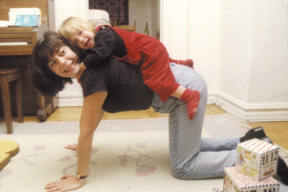 And Baby Makes Two, by Judy Katz and Oren Rudavsky, is a film for women about women. Specifically it deals with a group of New York women in their 40s who have decided to have babies without having husbands. For those for whom the issues of late motherhood resonate deeply, as well as those interested in the arduous trials inherent in such a quest, this film is destined to become a classic. It will push every emotional button.

There will also be those who find the whole process egocentric and barbaric. Some men, including this reviewer, will fit quickly into this category, excuse themselves from the TV room, and leave their wives spellbound on the sofa, drenched in tears.

"I wanted the white picket fence, but it all blew up in my face," says Jan. Her story is similar to those of the ten or so other women who meet regularly in a support group where much of the documentary’s filming was done. They always dreamed of having a family but either got too busy with their careers, or, as in Jan’s case, lost a long-time mate to a disease before they could start a family together. From this group three women are featured: Jan, who tries artificial insemination and is unsuccessful; Debbie, who goes about it "in the old fashioned way" and does become pregnant; and Lori, who goes to China and returns home with an adopted daughter from Shanghai.

The film delineates two key issues. One, voiced by Gloria Steinem, is that having and raising a child without a father, by choice, is empowering for women. It should not be acceptable that if a woman were a victim, say, of a divorce or unplanned pregnancy, society would accept her; yet, on the other hand, if she becomes pregnant by choice, without a mate, she risks ostracism.

The other side of the story is voiced by Lisa Schiffren: "There is a tremendous narcissistic element here." These are women who lived their lives as they wished, which didn’t involve being bothered with children until the alarms on their biological clocks began ringing too loudly in their ears to be ignored. Baby comes down on the side of women making their own choices. When you see how deeply all these women feel on the subject it’s hard not to agree.

The artificial baby-conceiving processes are nothing short of brutal. Timed ovary-release medicine, paying fortunes for donor sperm which usually doesn’t work, living your life around a doctor’s office hours – anyone who has gone through this hell will understand how exhausting and demeaning it can become.

The camera is everywhere. When Debbie gives birth to Joshua her father and mother are right there, Dad with the video camera, Mom cutting the cord. Again, many women will find this endearing. If any men are left in the TV room, Joshua’s on-camera arrival into the world should push them upstairs to the refrigerator once and for all.

This reviewer’s favorite moment in the film is the end, when montages of the women holding their babies are paired with a lovely Bonnie Raitt version of Ned Washington and Frank Churchill’s Baby Mine. This is the perfect music for a well done and thought provoking documentary.