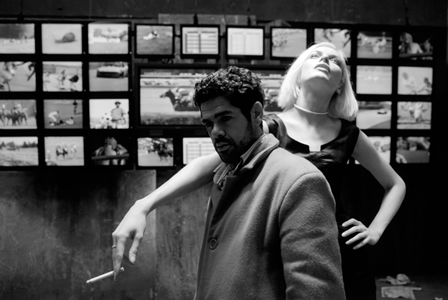 Written and directed by Luc Besson

Seventy years ago, in the American classic “It’s a Wonderful Life,” a portly angel named Clarence came down to Earth to save Jimmy Stewart from drowning, and convince him of his value as a human being. Now we have Luc Besson’s version of affirmation therapy, only this time the angel is not a portly old man, but a stunningly beautiful woman with legs that go on forever, a miniskirt that covers none of it, and a nicotine habit that would make Edward R. Murrow look like an occasional smoker. Hardly the kind of angel we would expect, but this movie is such a strange subversion of so many of our expectations that casting a supermodel as an angel is the least of it.

It is also obvious that Luc Besson has an affinity for beautiful, long-legged women. First there was Anne Parillaud (“La Femme Nikita”), then Milla Jovovich (“The Fifth Element,” “The Messenger”), and now Rie Rasmussen, a Danish actress (she was in Brian de Palma’s “Femme Fatale”) who plays the heavenly sent Angela. Rasmussen is an actress with little range; that and a perfunctory and heavily accented delivery of the slang-ridden French dialogue lead us to presume that Besson mainly chose her for the role because of his penchant for finely chiseled female bodies.

To be fair, the fellow Angela has been sent down to save and enlighten is no Jimmy Stewart either. He is also Rasmussen’s polar opposite. Debbouze is of small stature (the five-foot-ten Rasmussen towers over him), and is missing an arm from an accident as a boy (he keeps his sleeve tucked in his pocket so the stump is unnoticeable). Except for his soulful eyes, and a major acting talent, he is not an obvious romantic lead. He is also of Moroccan descent, which contrasts with Rasmussen’s pale Northern European blondeness. Their pairing paves the way for a fresh, imaginative reworking of the modern romantic couple.

The casting of these two in an otherwise very French romantic comedy feels like Besson’s reaction to globalization and the blurring of ethnic lines, which is to embrace it head on, with an unselfconscious acceptance. Besson’s decision to mix and match nationalities is even played for laughs when Andre, fearing for his life, tries to seek asylum at the American Embassy in Paris. It turns out Andre has American citizenship, so when he demands protection, yelling in the typical accent of the immigrant Parisian, “Je suis Americain!” it moves the whole ethnic debate into the realm of comedy. Besson’s politics are clear; he’s a modernist with no interest in traditional views about maintaining national purity. As a Frenchman, this is a distinctively refreshing outlook.

Andre is a fast-talking petty criminal who at first glance has no redeeming qualities. He is in debt up to his ears, and his obsequiousness around the thugs who slap him around to induce payment is a real turn-off. When Angela finally appears, Besson has left little room to allow us to think Andre is worth saving. Even Andre can’t understand why a beautiful woman like Angela would even give him the time of day.

When Angela finally descends from the heavens, Andre is teetering on the edge of one of Paris’ famous stone bridges, determined that the only way out of his mess is to kill himself. Angela leaps in ahead of him, forcing him to save her instead. Angela comes across as a suicidal social outcast just like Andre, and Besson bides his time before letting us in on her secret.

Angela spends most of the movie blithely using her superhuman powers to help Andre get out of trouble, although at first, we believe it is her supermodel powers at work. Angela even leads Andre to assume she’s prostituting herself when she stuffs money in his hands after going to the john with every male patron at the night club they wander in after their initial meeting in the Seine. When Angela later explains that it was her spiked heel that was the driving force of those encounters (shoving their heads in the toilet if they didn’t pay up), Andre’s love-struck ego may be appeased, but for some of us, brute force feels more like a step down the evolutionary ladder rather than a step up. This comic book mentality is nonetheless one that Besson has expressed before. His female characters know how to kick butt.

But Angela’s mission is not merely to use her superpowers to get Andre out of his financial trouble. She wants Andre to understand what his real problem is, his inherent self-derision. It turns out Andre needs to learn to love himself, to find his inner beauty. It’s Confidence Building 101, right out of Dr. Phil, or Andrew Carnegie. This is where the movie dips into trite sentiment that would normally be deadly to a film, but here it is somehow miraculously tempered by these two oddball characters. In their mouths, the pop psychology sounds transforming. When Angela forces Andre to look at himself in the mirror and say “I love you” to his own image, Andre’s face is full of anguish, and even embarrassment, at his inability to say those words. By the time he finally says them, his eyes are full of tears. It’s a great acting moment for Jamel Debbouze, and it saves the film from turning into self-parody.

The movie makes another odd turn after Andre has embraced his inner beauty and Angela’s mission is complete. The two fall in love, and once again, the effect is surprisingly exhilarating, in part because it is so unexpected. Besson lets the romance sneak up on his characters, as well as on us, and it makes the romance feel genuine. The movie ends in a very interesting place as a love story. All the comic book antics and armchair psychology fades away as Angela and Andre confront their emotional attachment. Once again Jamel Debbouze is marvelous, and Rie Rasmussen even shows more range as she grapples with her earthly urges. It’s too bad it took so long for the film to get here, because it’s not only the best part, it’s also the very end.