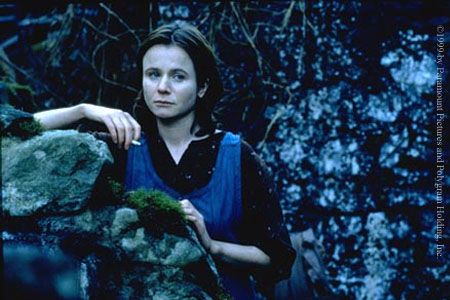 Angela’s Ashes is a painstakingly constructed shell with a hollow center – a biographical film that never quite finds its subject. Based on Frank McCourt’s Pulitzer Prize-winning memoir about growing up in Ireland amid appalling poverty, the movie makes the odd and ultimately fatal mistake of leaving McCourt out of his own story. There is a character named Frank McCourt here, played by three different actors at different ages, but the singular voice that made Angela’s Ashes a literary phenomenon is almost nowhere to be found.

What made the book so compelling despite its bleak subject matter was McCourt’s uncanny ability to plug the reader directly into the consciousness of his childhood self. Raised by a drunken, chronically unemployed father and a mother forced to beg for scraps to feed her children (several of whom died very young), McCourt certainly had ample material for a depressing tale. But no matter how desperate the circumstances, every event in Angela’s Ashes is filtered through young Frankie’s uniquely sharp and dark-humored sensibility. The book isn’t meant to be a grand statement on the misery of poverty; it’s meant to recapture the purity of a young boy’s view of the world around him.

In bringing Angela’s Ashes to the screen, writer-director Alan Parker has all but abandoned that perspective, thus draining the story of its most essential element – its humanity. Any film adaptation of the book was bound to run up against the same obstacle; the task of creating a cinematic equivalent for a narrative voice has defeated greater talents than Parker (Pink Floyd: The Wall, The Road to Wellville). But the director compounds the problem by replacing a child’s point of view with the world-weary voice-over narration of an old man looking back on his life. Only in a few scattered scenes – a church confessional, the reading of a school essay on "Jesus and the Weather" – does the spark and wit of young Frank McCourt emerge.

Parker turns his energies instead to recreating Frank’s grim environment – the blighted, rain-soaked lanes of Limerick, Ireland, circa the 1930’s and 40’s – and comes perilously close to making a fetish of filth. Parker’s Limerick is awash in mud and vomit; his camera lingers over steaming chamber pots and buckets of waste and bowls of runny gruel. There is truth in this depiction, of course, but is it the whole truth? The director seems intent on pushing past mere gritty realism. Using processed film stocks and lighting techniques to bleach all color from the picture, Parker conjures up a nuclear winter landscape that inadvertently (and inappropriately) evokes memories of Tim Burton’s recent Sleepy Hollow. His studio-built, overly art-directed vision of squalor calls attention to itself and does a disservice to the material.

For all its flaws, however, the movie is far from a disaster, and actually gains in power as it goes along. The episodic nature of the first half of the film gives way to a stronger narrative flow once the teenage Frank McCourt (Michael Legge) is introduced. As Frank’s parents, Emily Watson and Robert Carlyle both give strong, emotionally resonant performances (though Carlyle is saddled with the script’s tin-eared interpretation of Malachy McCourt, a much more vivid and original presence in the book). It’s a shame that the most effective scenes – Frank’s short-lived romance with a dying girl, his job with the local money lender and his confrontations with his mother – come so late in the game.

There are as many possible movies of Angela’s Ashes as there are readers (several million at last count), and in the end Parker’s version may be more notable for what it leaves out than for what it includes. At one point in the book, Frank is playing at a friend’s house when Angela comes to pick him up. The friend’s father, coughing himself to death with consumption, recognizes Angela’s voice. They reminisce about the nights they used to dance together at the Wembley Hall, then he asks her to sing one song for the old days, which she does. As she nears the end of her song, the hacking, dying man joins in on the final verse. It’s probably the most cinematic moment in the book. It’s not in the movie.