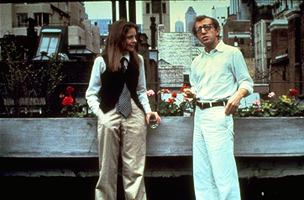 Reconstructing Woody: Art, Love, and Life in the Films of Woody Allen

"Life is full of loneliness, misery, suffering, and unhappiness – and it’s all over much too quickly," says Woody Allen at the beginning of Annie Hall. This could be a statement of the ongoing theme of Allen’s movies over a career that spans forty years and continues apace.

It is also the kind of line we expect from Allen – funny and observant, with that special New York twist. New Yorkers use irony more than other Americans. When New Yorkers make a statement, there are generally no fewer than two meanings contained at once and the listener is assumed to pick up on the multiple meanings. (Southerners, on the other hand, tend to say what they think you want to hear and hope you will not know what they are really thinking. Out here in sunny California, most people deal only in one meaning at a time, if there is meaning to start with.)

CV is not trying to mimic Woody Allen; that would be more presumptuous than even CV dares to be. But those lines, while theycan be accused of oversimplification and stereotyping, have just enough truth in them, and just enough New York attitude to offer some fun and some insight as well. Annie Hall, Allen’s only film to win the Academy award for best picture, starts out funny and never lets up, picking up on the subjects that Allen has pursued repeatedly over his extraordinary career: sexual dysfunction and the ups and downs of relationships with women, the insecurity/neurosis/psychotherapy of the New York intellectual, aging, guilt, paranoia.

If Annie Hall is the best of this genre, it is because it is one of Allen’s happier films. The suffering is kept light, the laughter is not heavily tainted with bitterness. The relationship of the hero, intellectual Jewish comedian Alvy Singer, with gentile, white bread, "neat" Annie Hall (Diane Keaton – very young and fresh and deliciously daffy here) allows for the amusement that arises out of the conflict of their cultures and the delight of the real romance they find in each other’s differences.

Allen cleverly uses a variety of film techniques, enhancing his consistently witty dialogue as he makes his points. He steps out of character to share a thought directly with the audience. He takes us on a visit to his childhood home, where the contemporary figures dialogue with the historical ones. He uses split screens to allow interaction between characters who would not be interacting in a realistic treatment, but whose verbal interplay provides still another method to explore meaning by playing off of differences. It is a tour de force that only the most skilled writer/filmmaker/comedian could pull off. There may be others who can do it, but none with the viewpoint, the wit, and the insight that Allen brings to it with seeming effortlessness, and, surely in the case of Annie Hall, great joy.