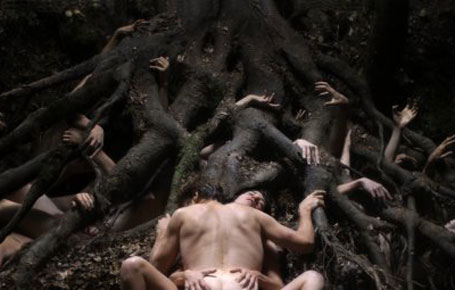 Antichrist isn’t a film for everyone. On the contrary, it seems that there is something in it that could turn away just about everybody, whether it’s the gory sex mutilations (in horrendously graphic detail), the bewilderingly obtuse thematic elements (Is nature evil? Is woman evil? Does therapy make you even crazier?), or the tedium of having to endure the hackneyed stylistic conventions of the horror genre (right down to creaky noises, rustling of unknown origin, and musical foreshadowing of ominous portent.) It’s a wonder anyone has anything good to say about Lars von Trier’s latest attempt to uncover the depths of his own wretched psyche, especially after the mass hysteria surrounding its panning at last year’s Cannes Film Festival.

In response, let me put forth an argument that Antichrist is worth the peril of utter disgust. For if you can get past the grotesqueries (closing one’s eyes helps), and if you can ignore the sheer nonsense of some of its claims, Antichrist is as provocative and fascinating a film as any I’ve seen in a while. Without a doubt, and even the film’s critics have acknowledged it, Antichrist contains some beautiful imagery, much of it using a slow motion technology that accentuates the fabulistic aspect of the movie. But even beyond the sheer beauty of some of its images, there is something compelling about this film, something that gives voice to our most private nightmares. Von Trier’s insistence on driving the narrative down into the raw elements of pure allegory, even down to the naming of its two sole characters as He and She, makes the movie a grotesque fairy tale for adults. It even has the woodland setting, the demonic forces, talking foxes, and a woman possessed, as any good fairy tale should.

The story itself is as old as the Bible and as brimming with metaphor. A couple has lost their child, and in their bereavement, other troubles surface, and their marriage crumbles. Von Trier exaggerates this story with the disturbing fact that the child has died by climbing out the window while the parents are distracted during lovemaking. And then, he exaggerates it even more by leading the woman into such depths of despair that she can only deal with them by convincing herself that she has somehow caused her son’s death, and her own mental derangement in turn convinces the man that she did it on purpose. Oh, the tangled web of von Trier’s brain, where at last we lose our sanity.

Von Trier has said that Antichrist was the by-product a two-year period of deep depression, and so it shows. The demons that She (Charlotte Gainsbourg) and then He (Willem Dafoe) have created are the manifestations of the fears and paranoia that inhabit troubled minds. To complicate matters, He happens to be a therapist, and has taken up the task of helping She work through her grief using various cognitive-behavioral therapy techniques. He wants her to “face her fears,” and by so doing realize that what she fears is not real; it’s just in her head. Ah, the hubris of the male, the narrow-minded ignorance of the therapist! What is in Her head our madman Von Trier knows is just as real as anything outside of it. It’s no wonder the fox warns He that “Chaos reigns” when He stumbles upon the creature in the forest.

In true horror story fashion, the couple head to Eden, their shack in the woods, in order to find out exactly what it is She is afraid of. Instead, however, the violent and merciless power of Nature takes over. Here, the film gets truly confusing. I couldn’t tell whether the demons She was grappling with-her guilt over her son’s death and her fear of her husband’s psychological control over her, both sexual and mental-were coming from her own psyche or were a part of some kind of occult force driven by Nature herself. What is von Trier trying to tell us? The only thing I can say for sure is that von Trier seems to have mixed feelings about the human sex drive. I didn’t, however, think his film was misogynistic. If anything, von Trier seems to be admitting an illogical fear of women, of their power over men, that has something to do with his own sex drive. I even felt by the end of the movie that She (fiercely and courageously played by Charlotte Gainsbourg) was actually a stand-in for von Trier himself, of that mad part of him that won’t allow him to stay sane, that part of him that insists that sex, like everything else driven by natural forces, is a part of “Satan’s Church.”

The sex drive, as we all know, is a strange force of nature (yes, the other kind of nature) that for some is a life-affirming experience, and for others is an example of humans at their most animalistic, their most vulnerable, and their most selfish. Antichrist is a kind of exorcism for von Trier, an exorcism that involves no less than the destruction of the genitals of both sexes. It’s a depressing thought for those of us who live our whole lives with the idea that sex-and it’s cohort, love-is the yardstick that gives meaning to life. No wonder so many people hate this movie. It’s von Trier showing us the flip side, the darkness we don’t want to think about. No matter that it doesn’t rely on logic. It’s a fairy tale, after all. And in all fairy tales, our worst fears are not in our head, but very real indeed.

For more info about this film, click the IMDb image below: