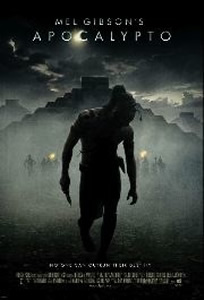 Rated R for sequences of graphic violence and disturbing images

I’m trying to imagine what it would be like to be Mel Gibson’s psychoanalyst. It might be fascinating…but fascinating like watching a train wreck. First there is his father, the holocaust denier. That’s good for at least several years of analysis. Now cut to his recent drunken diatribe…even more fodder.

But then there’s the core issue of Gibson’s choice of movie roles and movie productions: the Mad Max films (1981-1985), Braveheart (1995), Payback (1999), The Patriot (2000), The Passion of the Christ (2004), and now Apocalypto. Yes, I know he’s appeared in other styles of films, such as Hamlet (1990) and The Man Without a Face (1993), but Gibson has chosen to put his time, money and reputation into a succession of films, in which violence, bloody dismembered bodies, sadism, fear and revenge predominate. One might argue that his movies have universal themes and allow the audience to vicariously work through their violent and vengeful feelings, but the films, including Apocalypto, are so violent that I can’t find any excuse for it.

And it’s too bad, because there is a lot that is very positive about Apocalypto: the basic plot and subject matter of the film, its epic proportions, pace, locations, camerawork, chase scenes, stunt work, costumes and the largely Hispanic amateur and unknown actors who put many pros to shame.

The film takes place in the jungle near a Mayan city during the 16th century and is roughly divided into three acts: the capture, the slavery and the escape.

The movie begins with a group of tribesmen hunting, trapping and capturing a large tapir and then graphically dismembering it (I was almost ready to leave the theater after the close-ups of the bloody tapir parts. Little did I know…) Then we see scenes of the contented tribal society, in which each man loves his wife and children, practical jokes are enjoyed, and the old chief is solemn and wise.

The idyllic scene shifts dramatically as Mayan warriors brutally attack the village, savagely rape and kill most of the inhabitants and take the rest as slaves. (My thoughts turned to Vietnam and Darfur at this point.) Among the slaves is Jaguar Paw, who is wonderfully acted by Rudy Youngblood, 25, a Comanche and Cree Native American actor from Texas. Jaguar Paw had hidden his pregnant wife and small son in a deep rock cistern, only to see their escape rope cut by the warriors.

In Act Two, after an excruciating trek, the captured tribesmen arrive at a decadent Mayan city, in which starving slaves are building massive edifices. This scene, with its spectacular, epic scope and cast of thousands is reminiscent of De Mille’s The Ten Commandments (1956), with a hint of Schindler’s List (1993). Jaguar Paw is among those who are chosen as human sacrifices to appease the gods and bring rain and prosperity to the declining city. Slaves’ heads are gruesomely chopped off and thrown to the rabid crowd in an elaborate ceremony on top of a Mayan pyramid. But at the last second, Jaguar Paw is spared and given a chance to escape if he can outrun a gauntlet of warriors’ arrows. Astoundingly he manages to do so, though he is wounded in the process. Meanwhile, there are cuts to scenes of his very pregnant wife and son, vainly trying to escape from their cistern prison as it fills with rainwater.

In the heart-stopping third Act, Jaguar Paw literally runs for his life as he is chased through the jungle by a group of vengeful warriors. In one spectacular scene, he jumps off a gigantic, raging waterfall. He outruns and outwits his pursuers, who die one by one, not only in hand-to-hand combat, but also from a poisonous snakebite, a vicious animal attack, poison darts and entrapment in the tapir trap. Jaguar Paw arrives home to his village at literally the last minute and saves his family. Then, in an ironic, but heavy-handed final scene, we see the ships of the first Spanish explorers approach the coast.

So, what did I think of Apocalypto? I was very involved with Jaguar Paw’s story and when I wasn’t shielding my eyes from the blood and gore of the film, I was riveted by it, especially by the suspenseful chase scenes. I was aware of the trite aspects of the plot, but they didn’t adversely affect my experience. But my movie companion was so appalled by the violence that she left half way though the movie and told me that she was going to need a drink and an Ambien in order to sleep that night.