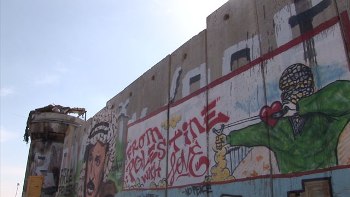 From David Zlutnick’s “Occupation Has No Future: Militarism and
Resistance in Israel/Palestine”

12 Films From the Arab Film Festival

Who would have thought that the wave of revolutions sweeping the world would have started in the supposedly backward, even primitive, Middle East and North Africa? And who would have thought that the courage and perseverance of its people could teach the narcissistic West and especially the U.S. a thing or two? Palestinian AFF head Michel Shehadeh and his fellow Palestinian, board president Jess Ghanam, put this evolving historical context center stage in their remarks to a large, receptive audience at the Castro Theatre in San Francisco on opening night of the 40-plus work film fest.

Would that Mohamed Amir’s “Egyptian Maidens” (2010) had been as strong as previous fest openers like Palestinian Najwa Najjar’s “Pomegranates and Myrrh” in 2009 and Algerian Lyes Salem’s Mascarades in 2010. But Amir’s tale of two pretty, just-turned-30, husband-hunting cousins Dalia (Sabrina Mubarak) and Hannan (Zeina) in pre-revolutionary Tahrir Square Egypt played like a soap opera that wanted to take on big issues like Internet dating, the emergency laws, and the efficacy of strikes. Plus there were too many characters, a warren of subplots, and did we need five or six scenes making the same point? All the great directors from Griffith to Renoir to George Stevens knew how much was just enough, and Amir’s film would have worked if it had been, say, 75 minutes, instead of 130. Fortunately Egypt was also represented by Magdi Ahmed Ali’s literary (with an almost Proustian voiceover) “The Birds of the Nile” (2009; photo above), which held one’s attention through the vigor of its storytelling and performances, especially the actress who played the hero’s sister, Narges, and looked a lot like Shelly Winters.

A film doesn’t have to go like a freight train but it helps, and Rachid Bouchareb’s 2010 “Hors la loi” (Outside the Law), though only six minutes longer than “Maidens,” went by in a flash and established its theme in the very first frames: Algeria, 1925. Land (a boy touches the earth) and dispossesion (the boy and his family are thrown off their ancestral land by an Algerian collaborator who’s given it to a French colonial). These themes, plus the struggle for social and personal liberation continue when the brothers Abdelbaker (Sami Bouajila), Messaoud (Roschdy Zem), Said (Jamel Debouze) and their mother (Chafia Boudraa) resettle just outside Paris in the shantytown of Nanterre, where Abdelbaker and later Messaoud, who slowly realizes what happened to him when he fought for the French in Indochine, decide to “bring the war home.” And a turf war erupts between the Algerians in the FLN (Front de Libération Nationale) and the MNA (Mouvement National Algérien), the French police, and the state’s security apparatus headed by Col. Faivre (Bernard Blancan) who will stop at nothing to keep the republic French, which Bouchareb and his co-scenarist Olivier Lorelle’s script and their superb cast make utterly inevitable. You get the what and why of every character, which is a major achievement in any film, especially in one of this size, and its contemporary relevance — you have to be loyal to the state because “terrorists” are at your door— bears out Gertrude Stein’s observation that the only thing that changes is what we’re looking at. Bouchareb is one of the few real auteurs working today, and his picture, complex but utterly successful on many levels, asks one essential question: Can fighting against others — the lesser jihad splashed across our TV and PC screens every day — defeat the greater jihad— itijihad, or war within oneself?

Internal and external struggles drive David Zlutnick’s trenchant doc “Occuptation Has No Future: Militarism and Resistance in Israel/Palestine” (2010), which exposes Israel’s brutal 60-plus year colonial occupation of historic Palestine and “the occupied territories” in the West Bank from a variety of perspectives. We get former IDF (Israel Defense Force) soldiers who’ve founded Breaking The Silence, to the most passionate and articulate Israeli Maya, to Palestinians like Jamal, who spearheads the campaign against the Apartheid Wall, which is dividing his people from their land, and many Palestinian village groups resisting this internationally condemned 500- mile long “security fence” ostensibly protecting Israelis from “terrorist” suicide bombers. Zlutnick and his characters eviscerate the racism, hubris, and outright delusion that poisons even “the liberals” in Israeli society like the New York Times-approved revisionist historian Benny Morris; his film deserves to be widely seen, if only on DVD.

Parts of Iara Lee’s rousing and beautiful-to-look-at (shot on five continents) documentary, “Cultures of Resistance” (2010) covers the same facts on the ground in Israel/Palestine, though the point of her film is that injustice is injustice everywhere. And let’s not forget that she caught the May 2010 Israeli commando raid on the Gaza-bound Turkish ship the Mavi Marmara on her video cam as it was happening in real, unaltered time.

A little-known and largely ignored side of the Israeli occupation of the Golan Heights, which Israel seized from Syria in the 1967 War and still has “joint custody” over with UN peacekeeping troops, is exposed in Sabrina Lubbe Bakker and Ester Gould’s doc, “Shout” (2009). Their film (left) follows best friends Ezat and Bayan as they go to study for a year in the world’s oldest continuously inhabited capital city, Damascus, which politics denies them access to, even though it’s only 60 kilometers away. It doesn’t hurt that the directors have two charming and handsome central characters to tell their story through, and the complex horrific events unfolding in Syria now — President Assad’s picture looms in several scenes — gives it a very in-the-moment charge.

Yet another occupation, this time by the U.S., is the subject of Mohamed Al-Daradji’s raw and moving doc “Iraq: War, Love, God & Madness” (2008). American helicopters buzzing over Baghdad like huge insects; car-bombed streets; the charm, humor and resilience of the Iraqi people in the face of impossible odds. And though Al-Daradji doesn’t mention the much ballyhooed exit of all U.S. troops by the end of 2011, it should be noted that the U.S. has established more than a “footprint “ in Iraq with the largest embassy in the world being built in Baghdad’s Green Zone, the presence of thousands of immune-from-prosecution mercenary contractors, and military bases to extend that presence in the land for years to come.

Occupied land isn’t a problem in “Here Comes the Rain” (2009) from Lebanon’s Bahji Hoeiji or Canadian Daniel Gervais’ Morocco-set “Taza” (2010), but their landscapes shape their internal dramas. Hilly Beirut frames a Chekhovian study in self-absorption, which plays out when Ramez (Hassan Mrad), kidnapped 20 years ago in the Lebanon Civil War, returns home to his wife, Marie (Julia Kassar) and a son and daughter in their 20s living there. The Middle Atlas Mountains is the backdrop for Gervais’ story about recovering alcoholic gnawi musician Omar (Mohamed Bastaoui) and how he, his daughter, and his fellow musicians come to terms with the emotional wreckage he’s wrought as they go to play a wedding in a stunning tiled house in Taza. Occupied land may not be a problem here, but occupied time is. Hoeiji and Gervais, who’ve directed many documentaries, don’t seem up to the completely different pacing demands in fiction film, where character and story, and not real time, run the show. The “set-up time” in “Taza” was almost unbearably slow, and the dramatic payoff in “Here Comes the Rain,” despite rock-solid performances, came at the very end, which was almost, but not quite, too late.

The languorous pace in Selma Bergach’s “The Fifth String” (2011) works for and against her elliptical story of the musical and spiritual coming of age of teenaged lute player Malek (Ali Esmili). We get the physical sense of contemporary Morocco — Essaouria, Tangier, and the old city of Casablanca where the story’s set — and Bergach’s cinematographer, Yohann Charnin, gets evocative results in every frame. But her script (this is her first feature) struggles to be profound and barely supports her story of Malek’s battle with himself and his vain sadistic teacher, uncle Amir (Hichem Rostom), who takes him into his home, which houses his music school. And Rostom’s Amir makes the notoriously demanding pedagogue Nadia Boulanger, who taught everyone from Virgil Thomson to Philip Glass, look like a creampuff. The gravely handsome Rostom, with his imperious bearing and ever present canes — now there’s a cliché that works — easily steals every scene he’s in, though his fierce confrontations with Malek could have been fewer, and thus more pointed.

No problems with pacing, point or script mar “Bahiya…& Mahmoud” (2010) from Zaid Abu Hamdan of Lebanon. It encapsulates a 51-year co-dependent marriage (or as Bahiya puts it, “since you got glued to my face”) in less than 12 minutes. Everything works to one end, with hilarious performances by Layla Hakim as Bahiya, and Faek Homaisi as Mahmoud. The film plays like “Who’s Afraid of Virginia Woolf?” before that alcoholic pair take the gloves off, and Abu Hamdan’s acutely chosen images reminded me of Satyagit Ray’s work both early and late. The 28-year-old filmmaker may have a good solid career ahead of him, and it will be interesting to see how he fills the time in his 90-minute first feature, “Nostalgia.”

Time isn’t a problem in Shakir Abal and Tim Longford’s doc, “Richard III, ‘An Arab VIP’ ” (2010, right), which plays like a guided tour of contemporary Arab identity seen through the lens of Kuwaiti writer director Sulayman Al-Bassam’s Royal Shakespeare Company–commissioned adaptation of the Bard’s eponymous political tragedy. A murderous dictator. Political corruption. Gender issues. Revenge. Or as one of Al-Bassam’s company puts it, “ Arabs understand the tribal system, and the feud between Lancaster and York in the play.” We get a quick look — my screener ran 58 minutes , the AFF theatre version 70 — at the complex aesthetic and political logistics of getting this show on the road, with a lively, committed company from Kuwait, Lebanon, Iraq, and Syria, with back-to-back performances for the Emir of Kuwait and D.C.’s Kennedy Center, which Fayez Kazak (who plays Richard) dubs “the heart of the new occupier.” It’s a fascinating, entertaining, and disturbing look at work in our very troubled time. Or, as Al-Bassam puts it “ Who is right? Who is the oppressor and who is the oppressed? This is the question asked by the play.” The Syrian actress Amal Omran goes him one better: “I read history and I see.”

$2.71 (as of January 23, 2021 - More infoProduct prices and availability are accurate as of the date/time indicated and are subject to change. Any price and availability information displayed on [relevant Amazon Site(s), as applicable] at the time of purchase will apply to the purchase of this product.)