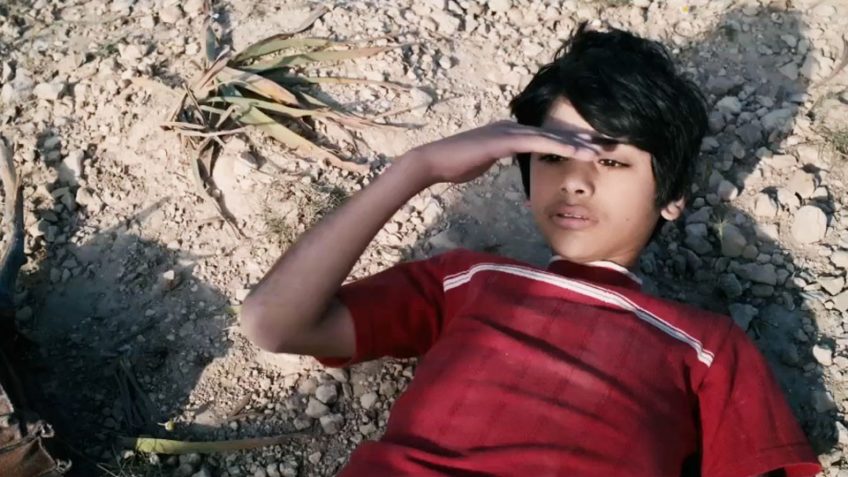 You’d think you were living on another planet, or in at the very least an alternate reality when you leave your house after watching the news. Is everyone out to get you, and is the world really falling apart at the seams? These thoughts came to mind when my friends and I caught Palestinian director Annmarie Jacir’s award-winning second feature ” When I Saw You ” (Lamma Shoftak) (2012), as the opening event of the seventeenth annual Arab Film Festival on a brisk October evening at San Francisco’s historic Castro Theatre. The world may be going to hell but you’d never guess that from the response of the large and largely young Arab audience there. They may text, tweet, facebook, and all the rest, but their minds and hearts were with Jacir from the get go, and it isn’t often that a film gets this kind of visceral and clearly earned acceptance.

Its subject is dispossession and the exile of a mother Ghaydaa (Ruba Blal) and her young son Tarek (Mahmoud Asfa) from their native Palestine to a refugee camp in Jordan during the 1967 War which redrew the map of Palestine.Jacir dramatizes the political situation where Tarek wanders into a resistance fighters camp run by Layth (Saleh Bakri) but seems to be more interested in using time and space to define the relationship between mother and son and the resistance fighters.The light in the desert, light and dark in the forest, and the wind breathing in the trees aren’t just a setting but characters moving in and out of Helene Louvrat’s evocative cinematography, and the actors who inhabit this realm are just as natural and convincing. It’s tempting to call Jacir’s film an entry in a “new poetic cinema ” because her images are just as important as her story and its ambiguous ending which few filmmakers, especially American ones, would even think of attempting.

The “ambiguities” in first time feature director Jessica Habie’s “Mars at Sunrise”(2012) are laid on with a trowel. She makes order out of the illegal Israeli occupation of the West Bank, which the 1967 UN Resolution 242 condemned in no uncertain terms, look supremely self-conscious and dramatically and artistically wrong. And it reminded me of what my late composer friend Virgil Thomson said he learned from his teacher Nadia Boulanger. “She taught that writing music was like writing a letter. All you had to do was say what you had to say and then stop. But Habie went on and on as if presenting the Palestinian “problem” objectively wasn’t enough but had to be finessed with art school arabesques which led nowhere. Even Ali Suliman, who’s one of the best and most frequently cast actors in Israeli and international productions, couldn’t save it.

No such problems marred Marcio Curi’s “The Last Stop ” (A Ultima Estacao) (2012) of which I only caught the first hour of its almost two hour running time, due to an appontment I had to re-schedule several times. This is an imaginatively conceived and realized tale of two teenaged brothers who leave their Lebanese village and board a ship bound for Brazil, and gradually learn the customs of their new non-Muslim home. The art direction in the ship is deliberately artificial, and Curi’s take on the immigrant experience has a fabulist “once upon a time” flavor similar to that in the Taviani brothers’ “The Night of the Shooting Stars”(1982). Curi’s direction and shooting style is succinct, heartfelt, and witty, and his film could be a hit in the art house circuit if it’s taken up by a distributor who knows how to promote it.

The immigrant experience was both text and subtext of Iraqi-Italian director Haider Rashid’s “It’s About to Rain” (Sta per Piovere) (2012)  which confronts the issues of assimilation and identity head on through the eyes of a young baker Said (Lorenzo Baglioni) who lives with his father Hamid (Mohamed Hanifi) and brother Amir (Amir Ati) in present day Florence where they have to deal with the labyrinthine laws of the Italian legal system. And Said’s defense of his human rights at a town hall meeting is eloquent and moving with not one false Hollywood note, and the rest of the cast are equally affecting. Young Italian cinematographer Alessio Valori’s frequently hand held camera work has a caught on the run immediacy and lots of atmosphere.

It’s hard to know what to make of Lebanese director Fouad Alwayan’s Beirut-set first feature “Asfouri”(2012). Is it a meditation on the Lebanese Civil War and its aftermath, or is it a semi-autobiographical take on Alwayan’s life in Beirut, where he was born in 1964, and after? It was both but the film, which largely focused on the goings on in an apartment house moved mostly from the first year of the war – 1975 – to 1997, with several unexplained and under developed scenes which seemed to come out of nowhere. Alwayan is clearly gifted, but his shifts in tone, from high comedy to flat-out melodrama tended to put one off. Few directors have been able to make these shifts work, with Godard and the late great Egyptian director Yousef Chahine being the great exceptions.

A less ambitious but far more successful take on Lebanon was the short “Studio Beirut”(2013) which pitted the young “old school” photographer Toufik against the city’s first photo booth next door. It didn’t engage heavy socio-political questions but entertained with a largely youngish cast, and was shot in over-saturated color ala Demy’s “The Umbrellas of Cherbourg” (1964).

Wael Omar and Philippe Dib’s documentary “In Search of Oil and Sand” (2012) was a fascinating look at Egyptian royals making a fanciful home movie in the 1950’s, with rare footage from that film juxtaposed with that shot in a large upper class house near Cairo’s Tahrir Square. The revolutionary politics of  Nasser’s time and ours spoke volumes about past and present Egypt, and the royals, who had amassed such wealth came off as both entertaining, and human all too human.

The Arab Film Festival is a rare and frequently surprising look at one of the most covered yet highly misunderstood parts of our world, There’s al lot of talent there, and much was displayed in its 2013 incarnation here.