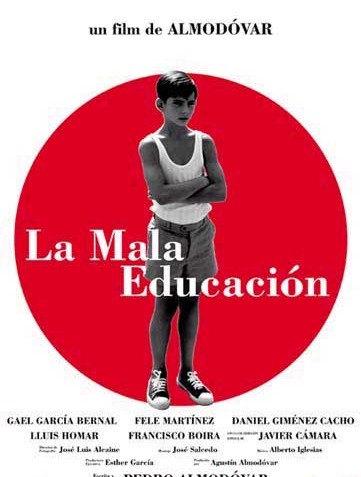 In 2002 and 2003, yet another round of public consternation grew over the revelation that thousands of children had suffered at the hands of pedophilic priests. The Catholic clergy underwent more soul searching while enduring calamitous lawsuits over the Church&#146;s attempt to cover up many of these incidents. In this environment emerges Pedro Almodovar&#146;s latest film, Bad Education, about the consequences of sex abuse on one Ignacio Rodriguez (Nacho Perez) at the hands of Father Manolo (Daniel Gimenez Cacho), the principal of a Catholic boys’ school.

The movie jumps back and forth in time between the early 1960s and the late 1970s. In the latter period, a successful young film director, Enrique Goded (Fele Martinez sporting an ugly Christopher Guest Spinal Tap haircut), is facing writer&#146;s block. Without much success he turns to bizarre tabloid stories of dead motorcyclists or suicides-by-crocodile to find inspiration. Then Ignacio (Gael Garcia Bernal, Y tu mama tambien, Motorcycle Diaries), now grown, comes back into his life carrying a screenplay he has written based on Father Manolo. Ignacio, as it turns out, was Enrique&#146;s first love and they met in Manolo&#146;s school. Enrique&#146;s forays into Ignacio&#146;s semi-autobiographical screenplay provide the 60s flashbacks of Ignacio meeting Enrique, their relationship, and Ignacio&#146;s damage from Manolo. Enrique decides to make the story his next movie, but Ignacio agrees only if he can play his own part. Enrique is skeptical, not only because he believes Ignacio is physically wrong, but because he feels he cannot trust Ignacio to be who he says he is.

Bad Education is a tonal return to Almodovar&#146;s earlier films like What Have I Done to Deserve This? and Law of Desire. It has all of Almodovar&#146;s usual obsessions &#150; lurid melodrama, deadpan camp humor, fearless presentation of alternative sexuality (Almodovar himself is gay) &#150; but it lacks the discipline and artistic focus that came with his last film and his pinnacle achievement, Talk To Her. In that movie, the homosexual undercurrent was sublimated and all the more powerful for it. Here, it explodes and smothers every corner of the screen, though this kind of indulgence is nothing if not audacious coming from perhaps the most recognized international filmmaker in the world right now. Why Almodovar is deserving of this reputation is only too clear as he tackles many a delicate moment that would flummox lesser directors. He nails both the romanticism in Ignacio and Enrique eyeing each other during the singing of &#147;Kyrie&#148; and the surreal camp comedy of a slow motion soccer game with priests&#146; flowing black robes resembling The Matrix&#146;s Neo in action.

The actors are up for their difficult roles. Garcia Bernal and Lluis Homar, who plays the mysterious, late-arriving Manuel Berenguer, are especially deserving of mention. Anything less than a bold leap of total conviction into these roles would mean failure.

Like many a recent movie that depends on extravagant twists however, Bad Education is out of the hands of the actors. An hour in, everything in the movie is upended in a way that is not so much difficult to swallow as simply out of left field. This second half of the story certainly has its own merits, but it feels disconnected from what has come before. Bad Education is simply a movie that is too clever for its own good. One leaves the theater feeling Almodovar&#146;s heart was less with the characters than with the constructed artifice of narrative game playing.

(20472)
$7.99 (as of January 21, 2021 - More infoProduct prices and availability are accurate as of the date/time indicated and are subject to change. Any price and availability information displayed on [relevant Amazon Site(s), as applicable] at the time of purchase will apply to the purchase of this product.)

(10900)
$7.64 (as of January 21, 2021 - More infoProduct prices and availability are accurate as of the date/time indicated and are subject to change. Any price and availability information displayed on [relevant Amazon Site(s), as applicable] at the time of purchase will apply to the purchase of this product.)
related posts