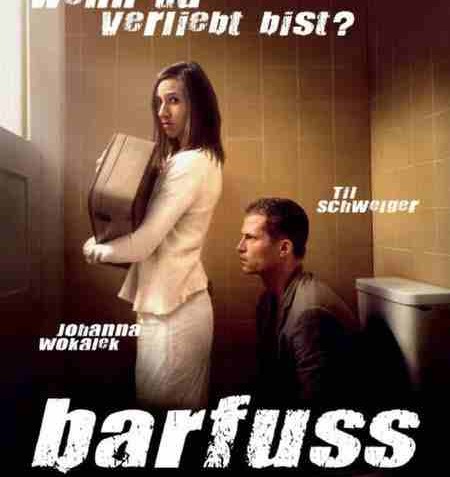 Germany has never been noted for its comedic output. In all the history of Germany theater, only the comedies of Heinrich von Kleist stand out, and he was writing over two centuries ago. This tendency continues in German cinema. Either German humor is bent toward scathing political satire, and crops up in cabaret sketches, or the German humorist has sought a more congenial home, often turning up in Hollywood. Not surprisingly, Barefoot had originally been sold to an American film studio in 1998, but when Hollywood failed to act upon the script, Til Schweiger bought the rights and brought it back to Germany.

Til Schweiger is the box-office draw of the moment in Germany, a mutli-talented actor who may bear a passing resemblance to Brad Pitt, but his lackluster acting talents more approximate a German Nicholas Cage. Schweiger&#146;s ego, however, is all Hollywood. For Barefoot, he serves as lead actor, director, writer, producer, and editor. The running joke in the German media has it that Schweiger was kind enough at least to leave the catering and make-up for someone else to do.

In Barefoot, Schweiger stars as Nick Keller, all around loser, an irresponsible, womanizing, anti-authoritarian man-child, who meets his match when he finds himself falling in love with a mental patient. As the story opens, Keller, who has had eight jobs in three months, wakes up to find a woman he has never seen before in his bed, an everyday occurrence at Keller&#146;s bachelor digs. He scurries off, late for an appointment at the unemployment office, only to find himself assigned to mopping floors at the local insane asylum. Unlike the US, Germany still institutionalizes its mentally ill, rather than leaving them to roam the streets and fend for themselves. Scrubbing toilets seems to be Barefoot&#146;s way of sending up the current Hartz IV welfare reform system, which does deliberately imitate the US "workfare rather than welfare" approach, and the set-up foreshadows the absurdist romantic comedy about to unfold.

Keller just happens to rescue mental patient Leila (Johanna Wokalek, whose performance is a gift to this film) from hanging herself with a bed sheet. Leila had been held prisoner by her mother for nineteen years, completely protected from any contact with the outside world. A complete naive, she was subsequently institutionalized upon her mother&#146;s death. Leila has little understanding of the outside world, and immediately attaches herself to Nick, because, as she infers, he "might be the boyfriend she would have, were she to have a boyfriend."

Many of the best comedic moments result from Leila&#146;s tragicomic knack for taking metaphors literally. Having been rescued from suicide, she follows Nick into the men&#146;s room, and into a stall, fussing over him, insisting that he be sure to sit down when peeing. Later, at Nick&#146;s brother&#146;s wedding reception, Leila expresses sincere concern for Nick&#146;s stepfather, and astonishment when she learns he is physically able to sit down, what with that iron rod shoved up his asshole.

As the improbable encounter between the two social misfits plays out, it becomes clear how much they fit each other. Once the tenuous romantic pairing has been established, Barefoot becomes a road movie, with a rich soundtrack full of American rock-and-roll music. The film takes its title and core motif from the rockabilly song "Barefoot" by the European 1950s-style group Ray Collins&#146; Hot-Club. Leila never goes "without shoes, "she is always barefoot, symbolically refusing ever to capitulate to society&#146;s straitjacket rules (something she obviously shares with Nick).

Moods and antics swing wildly, as in the traditional of Hollywood romantic comedy, from disturbing scenes of abandonment (at the train station) to Barefoot-in-the-Park romps, from embarrassingly public spats (Nick does not get along with his brother or his stepfather) to a gem of a scene in which Leila and the stolen Jeep Cherokee she is trying to drive are attacked by a thirty-foot chicken. This scene features popular German comedians Axel Stein, a young and pudgy Tracey Ullman kind of talent, playing against Markus Maria Profitlich, a not so young and pudgy, affable ax-murderer type, as shady low-lifes trying to buy the obviously stolen vehicle from her. But, as they observe with incredulity, "she doesn&#146;t need fun, she needs therapy."

Despite being highly derivative and often predictable, Barefoot contains some truly funny moments, and even an occasional moment of saving grace. Sometimes witty, often visually striking, and haunted by Hollywood, or rather a German vision of Hollywood (and a German version of American rock-and-roll), Barefoot tries very hard to please. The judicious application of Leonard Cohen&#146;s "Hallelujah" (Cohen is about as revered in Germany as Saint Bob Dylan; American audiences will recognize this song from Shrek) may reduce even the coldest heart of stone to tears. Barefoot is sure to send audiences home with a smile in their hearts and a sweet song stuck playing in their ears.