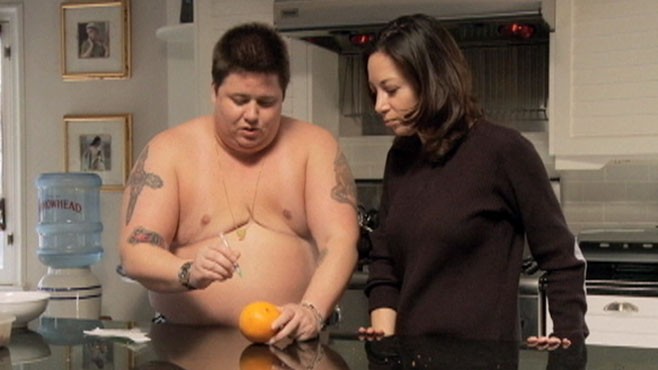 Chaz Bono is not only the subject of this documentary, but also its producer.

Ostensibly a documentary on her transitioning from a once-upon-a-time lesbian-identifying woman (many viewers will recall the media brouhaha when Chastity Bono came out as a lesbian some years ago), “Becoming Chaz” is a vanity project for Bono to be used to help him promote the transgender cause. This is most admirable, but makes for a skewed documentary. So many questions begging to be answered go unaddressed in this film.

Chaz Bono began life as Chastity Bono, the daughter of megastar husband-and-wife team Sonny Bono and Cher. At the ripe age of two, Chastity was thrust into the national television spotlight, appearing regularly on the “Sonny and Cher” variety show in the 1960s. That Chastity was able to lead a relatively normal life as the offspring of such media aristocracy is astounding. Nonetheless, she learned to know her way around the world of celebrity; she is a quintessential child of Hollywood, for all that.

The documentary opens six months after Chaz has come out (now for the second time) as a female-to-male-identifying transman, about to undergo breast-removal surgery. Chaz lives with his partner Jennifer Elia in Los Angeles. Both are in recovery from alcoholism (well, sometimes Jennifer is and sometimes she isn’t). Chaz violates a fundamental principle of Alcoholics Anonymous’s public anonymity; it is observed by failing to name AA. Among Chaz’s closest friends is her [AA] sponsor, half of a lesbian couple who have “loaned” Chaz the money for his surgery. (Nothing further is explored in this relationship.)

Jennifer expresses her own mixed feelings about Chaz’s transformation, saying she misses the old Chaz; testosterone treatments have induced a personality change in Chaz. Jennifer, who is also sober, apparently chooses to drink when faced with life’s bigger challenges, and it is admitted that she has been drinking through this sex-change period of Chaz’s life. Again, nothing further is explored in Chaz and Jennifer’s relationship. By the end of the film, the two are happily reconciled to each other, as they are to this day.

Perhaps the most intriguing dimension of this documentary is the relationship between mother Cher and daughter-turned-son Chaz. Cher is clearly uncomfortable with this second coming out. For most of her on-screen time, Cher is being interviewed solo. Only at the end of the film, when Chaz turns up for the Hollywood opening of Cher’s latest film “Burlesque,” do the two interact together in front of the camera. Cher is clearly seeking to minimize the encounter, as if wishing to avoid an unpleasant encounter with her son. It is perhaps the most honest moment in the entire film.

To his credit, it must be said that Chaz is quite brave to be so public about his sex-realignment. As a Hollywood celebrity, he probably has no other choice. We are taken through all the steps of how Chaz came to terms with his true inner self, the process of seeking and undergoing sexual reassignment surgery, the problems of getting his friends and family on board. In fact, most of the people in Chaz’s life seem to have no problem with this, and numerous private celebrations are held in its honor. In the end, Chaz emerges as a full-blown trans activist and is shown interacting with the parents of pre-teen transgender-identifying kids.

The problem is this documentary makes it all look so easy. We wish Chaz all the best and we hope he will be a good activist for the transgender community. As for being a typical example for a trans everyperson to follow, that’s another story altogether. Chaz’s handlers turn up on camera, his lawyer seems to be always lurking in the wings, and his public relations agent also appears on camera, briefly. Come to think of it, who footed the bill for this film’s production? How does Chaz pay his bills? Never mind. In this age of hyper-mediated fame, every group needs a famous personality on their team to be taken seriously.

(2368)
$9.99 (as of January 23, 2021 - More infoProduct prices and availability are accurate as of the date/time indicated and are subject to change. Any price and availability information displayed on [relevant Amazon Site(s), as applicable] at the time of purchase will apply to the purchase of this product.)

(28156)
$13.99 (as of January 23, 2021 - More infoProduct prices and availability are accurate as of the date/time indicated and are subject to change. Any price and availability information displayed on [relevant Amazon Site(s), as applicable] at the time of purchase will apply to the purchase of this product.)

(9678)
$4.50 (as of January 23, 2021 - More infoProduct prices and availability are accurate as of the date/time indicated and are subject to change. Any price and availability information displayed on [relevant Amazon Site(s), as applicable] at the time of purchase will apply to the purchase of this product.)
related posts