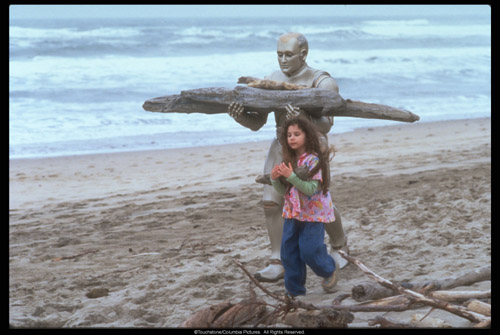 Bicentennial Man started as an Isaac Asimov short story – and a pretty good one, in the Asimov genre. Then it got recycled, blown up and spat out as a full length novel, The Positronic Man, with ace sci fi writer Robert Silverberg credited as co-writer. Now director Chris Columbus delivers up, just in time for the turn of the century, a two hour plus movie version. The exact time is not provided here, since it has been carefully omitted from all publicity materials. Who knows what might land on the cutting room floor before it begins its commercial release?

The more they cut, the better chance they will have to end up with a good movie. Based on the version screened for critics, Columbus could have discovered another new world in less time than it takes him to tell the story of Andrew (Robin Williams), the robot who would be human. The film follows Andrew from his first position, out-of-the-carton as it were, as a servant to a wealthy family, through two hundred years as he gradually becomes more and more human.

It is the perfect sci fi setup: an imaginative story that allows the writer to explore themes that are very much about human realities. Exploring the parameters of difference between a robot and a human can reveal a lot about the nature of human-ness. Not long after Andrew is in (luxurious) residence with his owners, he is caught blissfully listening to opera. In addition to the unexpected esthetic sense, he displays characteristics of creativity and curiosity. He develops a sense of humor. He becomes capable of caring about the people in his life. (Life?)

The film continues through the generations as Andrew pieces together more and more of his human persona. It takes it all, however, at a pace suggesting that Columbus was being paid by the running celluloid foot. Columbus trips up on his own footage here and (in what has become the distinguishing directorial evil of many of the past year’s films) lets it run on until audience exhaustion sets in.

The lack of any real conflict makes Bicentennial Man seem even longer than it is; it has no momentum at all, but is a series of episodes that fail to have a cumulative dramatic impact. There is a lot of charm, but it isn’t charm rooted in the very individuality the film claims to espouse. It’s cookie-cutter charm. The various members of Andrew’s family, over the generations, are a nice bunch. (The one guy who is set up to be the unlikeable one isn’t around much.) Williams nicely underplays his role and is surely a likable robot. While is may not have fit Columbus’ scheme of fairy-tale realism, a little more of Williams’ unloosed comical magic might have done wonders.

The special effects are kept reasonably subdued, well-executed in service of the story. The futuristic settings are conventional – and the images of San Francisco will validate every anti-development activist’s nightmares.

But even if Columbus had managed to keep Bicentennial Man to a more reasonable length, he would have missed here because, unnecessarily, he fanfares with emphasized text every theme of the film. He underestimates his audience’s ability to get the point from the events of the story itself. Do we need for Andrew to tell us with dialogue that it is a cruelty to feel pain and not be able to cry, when the scene itself has already made that clear? Do we need a speech about the need for acknowledgment of one’s uniqueness in order to sustain dignity? And do we need gallons of saccharine ladled over scene after scene?

Someday, a different director will take this story and make a real movie out of it, a movie that uses the superb visual storytelling capability of the medium to follow Andrew’s exploration of what humanity is about without sentimentality, without spelling-it-all-out, without pandering to the lowest common denominator in the audience. Audiences deserve better than Bicentennial Man.

(26826)
$9.99 (as of January 21, 2021 - More infoProduct prices and availability are accurate as of the date/time indicated and are subject to change. Any price and availability information displayed on [relevant Amazon Site(s), as applicable] at the time of purchase will apply to the purchase of this product.)