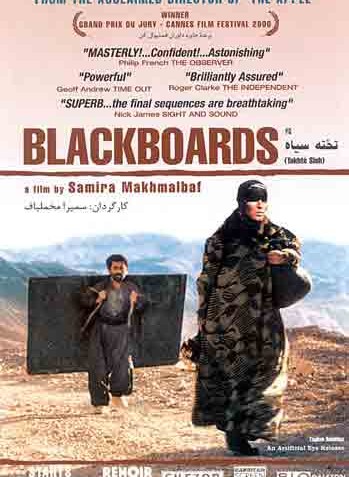 Samira Makhmalbaf first came to prominence with her first film, The Apple, which she made when she was only 17. Of course Samira was no ordinary 17-year old, being the daughter of Mohsen Makhmalbaf, one of Iran&#146;s most famous filmmakers and a star on the international festival scene. Samira even beat her step-mother, Marzieh Meshkini who made The Day I Became a Woman, to the big screen. Following in the footsteps of her father&#146;s A Moment of Innocence and Abbas Kiarostami&#146;s Close-Up, Samira made The Apple a documentary-like adaptation of a real-life story. Her sophomore effort, Blackboards, is something else entirely.

Co-written by Mohsen, the film takes a page from his dreamlike Gabbeh. Blackboards looks like neorealism, but it has the feel of a fairy tale.It&#146;s less a story than a jumble of incidents its characters encounter along the course of a long journey.Debuting at the 2000 Cannes Film Festival and taking 2� years to get its U.S. release, Blackboards is one of those victims of a finicky distribution system.While not an altogether successful movie, it is an enormously striking product for a 20-year old filmmaker.

Blackboards opens with a group of teachers carrying large rectangular blackboards on their backs as they march through a rocky Kurdistan mountain range in search of students.When a helicopter passes over them, they huddle in fear before camouflaging their blackboards in mud, which has the effect of making them look like orange-brown Jackson Pollock drip paintings.Two teachers, Reeboir (Bahman Gohbadi, the director of A Time for Drunken Horses) and Said (Said Mohamdi) venture off in two different directions, but neither are able to find anyone interested in learning from them.Everyone is struggling merely to survive and none have time for reading, writing, and mathematics.The starving Said comes upon a large group of wandering old men, and in exchange for forty walnuts, he agrees to guide them to Iraq.Along the way, Said marries a young widow, Halaleh (Behnaz Jafari), because her ill father (Mohamad Karim Rahmati) wants to find someone to take care of her before he dies.Said&#146;s blackboard acts as his dowry.Halaleh however practically ignores the world around her and that includes Said.Her only devotion is to her very young son, Chuan (Hassan Mohamadi, whom Samira milks for his cuteness).

Blackboards is filled with memorable, often surreal scenes &#150; Reeboir concocting a story from a son&#146;s letter to the father who can&#146;t read, a crowd that tries to get Halaleh&#146;s father to urinate, boys smuggling contraband over the Iraqi border hiding amidst a herd of goats, and Said&#146;s bizarre marriage ceremony (or lack thereof). At times, it feels like Luis Bunuel without the bawdiness.But as a whole, the movie never comes together as a coherent whole.It&#146;s also got some dizzying handheld camera work as if no one on the set had ever heard of a steadicam. Still, Samira makes gorgeous use of the landscape and images of masses of old men swarming over steep, treacherous terrain will linger in the mind long after the movie is over.