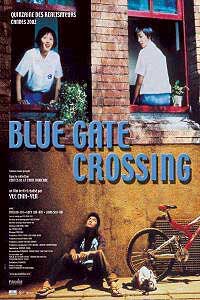 Writer-director Yee Chih-Yen&#146;s second film, Blue Gate Crossing, is so simple a story that it might seem slight were its greatness not revealed in the telling. As with many a joke, what makes it work isn&#146;t what is said but how it is said.

Set in a Taipei high school, the oddly named Meng Kerou (Guey Lun-Mei) flitters her days away with cute best friend, Lin Yuezhen (Liang Shu-Hui), who is obsessed with a boy on the swim team named Zhang Shihao (Chen Bo-Lin). Except for Yeuzhen, quiet Kerou is standoffish toward her fellow classmates. If Yeuzhen&#146;s childish and girly antics cast implausibility on the likelihood of these two being friends, adolescent needs for companionship often results in strange bedfellows. When Yuezhen asks Kerou to approach Shihao to find out if he has a girlfriend, Shihao thinks Kerou is the one who actually has a crush on him and begins pursuing her instead. The problem is, Kerou isn&#146;t just friends with Yeuzhen, she is in love with her and is in a constant struggle with her sexual orientation.

Blue Gate Crossing could have been formulaic fluff, but Yee avoids sentimentality and easy answers every step of the way. The naturalistic acting of all three leads gives them a warm empathy. There are no showy, emotional scenes, just a tender display of the magnified insecurities that plague most 17-year olds. Guey and Chen are both outstanding. While Guey is less conventionally pretty than Liang, her body language and silent stubbornness give her a more evocative presence. Chen looks like a goof with his spiky hair and an adorable set of dimples. As he plays Zheng, he&#146;s not the brightest bulb either, but there&#146;s a well-meaning, sincere soul lurking underneath. When Kerou and Shihao engage in a shoving match among rows and rows of empty chairs, their emotions find a physical outlet that they can&#146;t articulate verbally. It is simultaneously funny and heartbreaking.

Yee choreographs it all with effortless grace. He opts for a different kind of formalism than his compatriots, Taiwan&#146;s big three directors &#150; Edward Yang (Yi Yi), Hou Hsiao Hsien (Goodbye South Goodbye), and Tsai Ming Liang (Rebels Of The Neon God). The influence of their master shot style on Yee is in evidence in Yee&#146;s eye for composition and framing of his long shots, but Yee utilizes a more relaxed, less rigid minimalism. There are a lot more edits and close-ups, and Yee shows inventive skill at telling the story visually. In one inspired scene, Yuezhen points out to Kerou a classmate who has wronged her, and the film goes to a shot of the classmate walking, which according to traditional film grammar, would be from Kerou&#146;s point-of-view. Only Yee has played a trick; in the same shot Kerou soon appears behind the girl as a silent stalker ready for vengeance. Yee also finds humor in Yuezhen&#146;s writing Shihao&#146;s name over and over again as an imaginary spell to make him fall in love with her.

Immeasurably aiding Yee is cinematographer Hsiang Chienn, who makes the film&#146;s crisp, vivid colors leap off the screen. The lighting of his night shots is even more spectacular. From the immaculate rippling blue waters of a swimming pool to outdoor green gardens to street-vendor stands at sunset, Taipei has never looked so beautiful (or so clean). Composer Chris Hou also adds a beautiful classical-sounding piano score.

Blue Gate Crossing bears some resemblance to the recent and equally remarkable Raising Victor Vargas in their shared subjects of young love. However, the differences in Yee&#146;s and Peter Sollett&#146;s approaches, as well as the divergence in venues between modernized Taipei and New York&#146;s Latino Lower East Side, are instructional to all aspiring filmmakers in how style and setting can impact similar subjects while inspiring illustrious artistry in different ways.