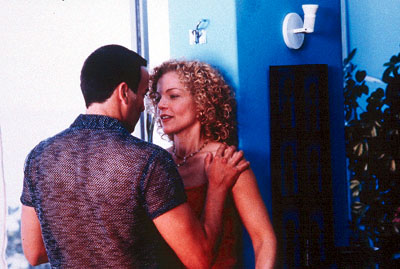 Bruno Barreto&#146;s Bossa Nova has all the earmarks of a work that was made by a happy man &#150; perhaps a man who&#146;s too happy. It registers the ups and downs of romantic relationships in a way that doesn&#146;t get you either too down or too elated about them. Watching it is like having one shot, and one shot only, of a mellow liqueur; it&#146;s infused with the light intoxication of the Antonio Carlos Jobim songs that fill the soundtrack.

Barreto (Dona Flor and Her Two Husbands) has made a mini-Altman picture that follows nine characters in Rio de Janeiro over a few days&#146; period. Amy Irving plays Mary Ann, an American whose mourning period for her dead husband is just reaching its end. Mary Ann teaches English at a private school that&#146;s located in the same office building as the law offices of Pedro Paulo (Antonio Fagundes), a middle-aged attorney whose wife has dropped him for a young Tai-Chi instructor. Pedro Paulo is an intelligent and decent man whose anger is pushing him into stupid, goading actions: he spies on his wife, then berates her in public when she catches him. But when he sees Mary Ann getting onto the elevator one evening, life clicks back into place for him. He stops hounding his wife and enrolls in one of Mary Ann&#146;s classes, and begins to tenderly woo her.

The spokes extending outward from this two-character hub include a macho soccer star who&#146;s just signed a contract to play for a British team, Pedro Paulo&#146;s droopy younger brother, an ambitious and sexy intern in the law office, and a young woman whose Internet flirtation with an American man is about to culminate in a personal meeting. The characters are all connected by circumstance or affection &#150; the soccer star takes English lessons from Mary Ann (he wants to be able to swear at his opponents in English), Pedro Paulo&#146;s wife is the ticket agent who handles the Internet dreamer&#146;s travel plans, and so on &#150; but it takes them a while to sort through each other and find the right match.

Bossa Nova doesn&#146;t make any large-scale statements about the way these alliances form and disintegrate, but it&#146;s faithful to the moods of love, and it catches itself when it starts to nosedive into cliche. (When Mary Ann faints in Pedro Paulo&#146;s arms the first time that he kisses her, we think it&#146;s because she&#146;s been drinking and that the scene is going in a sitcom direction, but a moment later she bestirs herself and is ready for another kiss.) And it&#146;s filled with behavioral tics that ring true, as when the intern can barely be troubled to remove her headphones from one ear to hear out the complaints of a man she&#146;s unceremoniously dumped.

Barreto lived in the United States for 10 years, and it shows in his feeling for the physical and emotional distances that can separate people. Bossa Nova is structured like those Doris Day farces where a series of romantic misunderstandings climax with all of the cast members piling into different cars and racing to the airport, but here the screw-ups are droll technological and linguistic mishaps that reflect the characters&#146; emotional missteps. Both parties in the Internet romance tell cheerful, transparent lies about themselves, cell phones go off at awkward moments, and people are constantly searching for the right word in Portuguese or English. The farcical tone is elevated enough that we want certain of these people to wind up together for their sake, not just to end our frustration.

Bossa Nova is Barreto&#146;s self-described love letter to Rio, and several of the city&#146;s architectural treasures and paradisal beaches serve as its locations. Everything in the movie, down to the tones of the actors&#146; suntans, has the super-real clarity of Kodak commercials, adding to its summer daydream feeling.

Its performers are the best reason to see Bossa Nova. Amy Irving&#146;s acting goes in and out of focus (it always has), but she radiates such intelligence and sanity that it&#146;s easy to see why Mary Ann snaps Pedro Paulo out of his funk. (Barreto and Irving are married in real life.) Fagundes is the movie&#146;s real find, at least for North American audiences; he&#146;s a well-established star in Brazil, with almost forty film credits. With his deep tan and linen suits and silver hair, he has the shimmering worldliness of a Mastroianni &#150; an amazing accomplishment since he physically resembles an older Jon Lovitz. Fagundes&#146; mature sensuousness is put to good use when Pedro Paulo goes to his father&#146;s tailor shop, and with his own hands makes the blouse that he gives to Mary Ann as the opening salvo in their courtship. Alexandre Borges as the soccer star and Giovanna Antonelli as the intern give the movie an ache: they&#146;re both likeable performers cast as unlikable people. Bossa Nova even gets the kitchen sink thrown into it when Stephen Tobolowsky (he played the insurance salesman in Groundhog Day) turns up in a crucial role late in the picture.

Bossa Nova could have used a few more touches like that blouse-making episode. It&#146;s a tender movie, but it&#146;s also wispy, and Barreto&#146;s good feelings about love and sunshine don&#146;t fully compensate for its lack of poetry. But Bossa Nova fulfills its modest ambitions &#150; you don&#146;t feel stupid for feeling good about it afterwards.