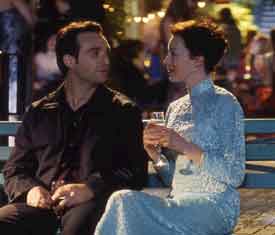 When the first thing heard on a movie soundtrack is the sound of a toilet flushing, it forebodes either another of those tired, bathroom-humor comedies or an unimaginative director desperately trying to grab attention and energize a lackluster product. In Break a Leg, it’s the latter, confirmed by an unfunny later scene involving competitive urination and yet another that seeks humor in the lead actress being the model for a condom billboard.

Written by two actors, John and Frank Cassini, and starring John as well, Break a Leg is a whimper of protest that wants to be a scream, but never achieves the degree of cleverness that might have imparted some impact to its complaint. It decries the tough life that actors suffer in Hollywood, noting the hard work of taking classes (with a cliched satirical take of one such class – "I’m a seagull!"), the endless auditioning for jaded directors, the ineffective agents, the nepotism that gives lesser lights the breaks, the jobs as bartenders or servers to survive until the next role comes along.

The premise on which the awkwardly developed plot hangs is that actor Max Matteo (Cassini), in desperation, breaks another actor’s leg so that he can land the role for which they are competing. A second incident involves pushing another competitor down a flight of stairs. Then a cop (Rene Rivera) goes undercover as an actor to find the perpetrator and the film slips into an unfocused parody of a noir thriller.

There are occasional moments of satirical fun and a few funny lines come through ("I’m a leading man–I don’t want any character!"), but more often than not the attempts at humor fall flat and what means to be dark plays as merely dim. (If powerful satire of Hollywood is what you want, rent Robert Altman’s brilliant The Player.)

There is virtually no character development in Break a Leg; never for a moment is there a sense of who these people are beyond the assigned role of "actor" or "cop" or "agent." The only player who generates any genuine energy on screen is Rivera and his role is too small to make the needed difference. Narrative interest and drive flag seriously by the half way point, unassisted by a continuing series of cameo appearances by actors like Jennifer Beals, Eric Roberts, Eric McCormack and Sandra Oh. The unconvincing melodramatic climax lacks any tension whatever, despite the pumped up soundtrack which fails to resuscitate a movie in its last throes.