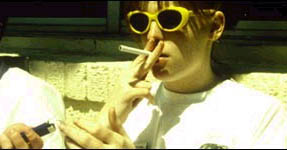 North Carolina&#146;s most famous novelist, Thomas Wolfe, once wrote that the most romantic notion was not &#147;the desire to escape life, but to prevent life from escaping you.&#148; It&#146;s a sentiment with which North Carolina&#146;s most famous documentary filmmaker, Ross McElwee, would probably agree. Indeed, McElwee at times seems incapable of putting down his 16mm camera, for fear of letting some vital moment of life escape capture&#151;even if it proves a clumsy third wheel on the odd blind date or, in the case of 1994&#146;s Time Indefinite, a massive distraction at his own wedding.

Ross McElwee makes movies about Ross McElwee, which somehow manage to spiral out towards universal concerns like mortality and existence in a way that&#146;s quite comforting.Since he virtually invented the first-person film essay with 1986&#146;s Sherman&#146;s March, he&#146;s remained one of its most reliable avatars. With an off-camera persona that&#146;s both self-deprecating and amiable, his presence as narrator and interlocutor grounds each of his films in a warm candor that makes interviewees offer up their lives and stories gladly, it would seem.It helps that he knows a good thing when he&#146;s got one, which explains why Charleen Swansea, the director&#146;s former teacher and close friend, turns up again and again in his movies.And though he&#146;s lived in Boston for most of his adult life, McElwee remains drawn to the south; his journeys home to see friends and family often mark the beginnings or endings of films.In some respects, his films are chapters in the ongoing work in progress that is his life.Where Sherman&#146;s March zeroed in on his bumbling quest for true love, Time Indefinite and Six O&#146;Clock News deal in married life and the concerns of fatherhood.

Bright Leaves, the next installment in the series, is about aging and legacy, so it&#146;s fitting that it finds the director moving outside of himself.He discovered a dusty old print of Bright Leaf, a Hollywood melodrama whose plot echoes a long-standing McElwee family legend; his own grandfather was a wealthy tobacco baron until the patriarch of the Duke family (yes, that Duke) allegedly stole the business out from underneath him.By unraveling the tangled skein of his family&#146;s involvement in North Carolina&#146;s tobacco heritage, McElwee is able to free-associate on health, wealth (he notes with a smirk that there is no McElwee University to this day) and the nature of addiction.

It is this last element that underscores once again McElwee&#146;s prevailing obsession as camera-operator (Bright Leaves sees the director taking on some help behind the camera; to promote father-son bonding, he takes his son on as sound man.) A non-smoker, McElwee&#146;s examination of tobacco culture shows concern but not condescension, and his description of the seductions of smoking finds a parallel in the way he shoots his beloved home state.From Winston-Salem&#146;s manufacturing plants to the old money of Durham&#146;s Tobacco Road, to the tiny plot of grass where his great-grandfather&#146;s factory once stood&#151;now dubbed McElwee Park&#151;his camera always manages to find the human element buried under the sediment of history. Another volume in his ongoing chronicle of life in the New South, Bright Leaves is further proof that what we pass on from generation to generation is something intangible, even if&#151;to cop another phrase from Wolfe&#151;you can&#146;t go home again.